Oliver Reichenstein: "Journalists are information architects in their way as well"

Oliver Reichenstein gave an enjoyable keynote talk to open the EuroIA conference in Paris on Friday. You can download his slides here, and I'll be returning to blog about some of the points he made later in the week.

An interesting thing cropped up in the Q&A after he finished the main talk. Oliver has done a lot of work with redesigning the digital presence of newspapers, and one of the questions from the floor was why he was attracted to that sector.

He said that he found it one of the most interesting fields to work in because newspapers have a very old and authoritative content strategy. There is always lots of content, with a high flow, and it is consequently always very hard to find things.

He went on to say that one of the key connections for him with traditional printed media was when he was studying classic works of typography, and came to the realisation that good design wasn't about being cool or nice or hip, but was about readability. Traditionally, he said, newspapers have had that.

What fascinates him though is that the 'mosaic' layout that we have all grown up with, and understand to be what a newspaper 'is', is actually deeply rooted in the technology of their time. If you had to move big blocks of text quickly, because something big and important had happened late in the day, then, for setting physical type, the newspaper column layout is the ideal format.

Oliver feels that there is a lot newspapers could now learn in reverse from digital products, by bringing the principles of information architecture and information design to the print product, particularly around scanability. During the talk he showed a redesigned print newspaper page which featured key words in the text picked out in a different blue 'links' colour, to enable speed-reading and comprehension of the article. 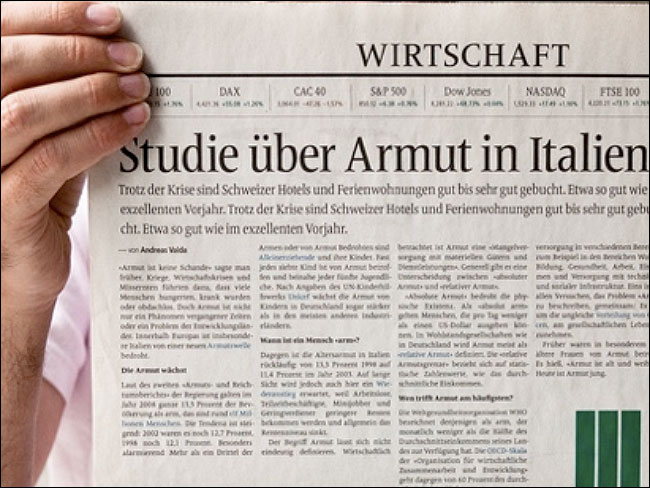 He conceded though that a problem was that print tends to have an older audience, and that whilst a radical redesign of the form might make it easier to read, the danger was a total rejection from consumers - "That's not my paper anymore".

Oliver also used a very interesting phrase - "Journalists are information architects in their way as well".

I'd always considered my affinity with the journalistic process to be based in my academic background of sifting historical sources and historiography to get at 'the truth' of events. But maybe there isn't just one information architect working on guardian.co.uk - maybe there are hundreds of them, and they just don't realise it...

Time permitting, I expect that over the next week or so I'll be blogging quite a bit about the presentations I saw, and the discussions I had at EuroIA this year.

As a writer & publisher I am going through with books, as what you are referring to regarding newspapers. We could debate about it all night, but when the smoke cleared, it would come down to the fact that print media is dying. We can only go with the flow and move on.

I live in a small town in south louisiana. We still get the daily paper. i love it! I love when the old men come into the cafe where I work and read the paper as they drink coffee. What will we have to move to, an internet cafe? That is just much less personal.