One of the talks I really loved at this year's EuroIA was Claire Rowland & Chris Browne talking about designing for the 'Internet of things'. Generally when I talk about an 'Internet of things' I'm thinking of linked data style URLs that describe real-world things, but Claire and Chris were talking about physical objects and their work at Fjord on the SmarcoS project. 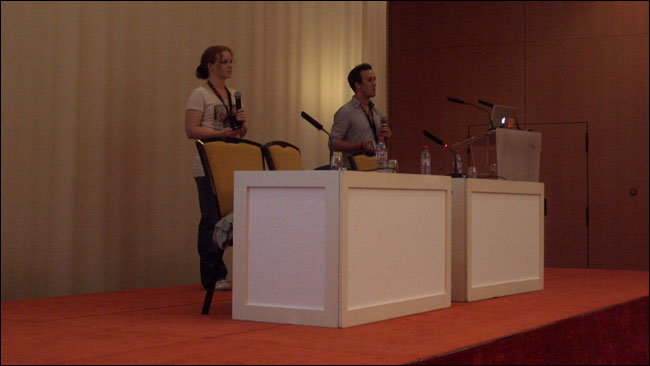 As they observed, people have been promising that ubicomp is just around the corner for a couple of decades now, but the proliferation of smartphones and net-connected devices seems to be really pushing us there. They gave some examples like the FedEx 'senseaware' and the digital sensors in the SFpark project.

The problem is always to identify the compelling use cases that are going to take these connected devices and data-driven experiences into the mainstream. It would now, for example, be inconvenient to go back to the days of phoning up a building and hoping the person you wanted to speak to was in it at the time, and the mobile phone has proved its worth. However I can't imagine people looking back and saying "How did we ever cope with umbrellas which didn't know whether it was going to rain or not".

It is always difficult to future gaze, but it seems to me that the devices and services that could be truly transformative mostly involve reclaiming otherwise wasted time, or avoiding physical waste.

We've all laughed at the idea of the Internet enabled fridge, but the mutually shared shopping list that updates in real time across several devices seemed like a good halfway house between putting RFID chips in all our food, and the current haphazard way of shopping. There are always the dark design patterns to think about though - is a shopping trolley that routes you through the supermarket in the most efficient way for what you want to buy really in the interests of the retailer? Surely their ideal is that everybody is routed past tempting offers that cause them to increase their spend slightly?

For me, where these possibilities become really exciting is when you can actually see what a personal impact they would have on your quality of life. Given that I know how long it takes me to walk to the bus stop in the morning, and that there is data about where the bus actually is, it ought to be possible for an alarm to go off on in my house each morning saying "Leave right now!", which would minimise the amount of time I spent hanging around the bus stop, and maximise the amount of time I had to spend with my daughter each morning. If you added up those extra few minutes with her every day over the course of a year, it would amount to a significant chunk of time, and would be well worth the investment in the gadget and service.

Travel seems to be a place where having more accurate and real-time information empowers people to make decisions. The last time the London Underground was on strike, a combination of the tube status iPhone app and Google maps helped me avoid making a 45 minute walk as I was able to dynamically re-route. Even a couple of years ago I would have instead been reliant on listening to broadcast radio for travel news that wasn't at all tailored to my personal situation.

Of course, it may not be that reclaiming all these scraps of time and improving the efficiency of travel has the expected effect. During their presentation Claire pointed out that the washing machine was marketed as an amazing labour saving device that would free up spare time, but in fact all it did was change the mainstream perception of how frequently clothes should be washed.

There were a host of other interesting examples in their slides, including a Korean initiative where one smart card for kids acts as their bus pass, library card, and school access key - letting their parents know what they are doing, and the idea of watching an interactive and annotated version of something on your handheld device at the same time as having it on the wall on your flatscreen TV. Johanna Kollmann has blogged her notes from the session for Johnny Holland. 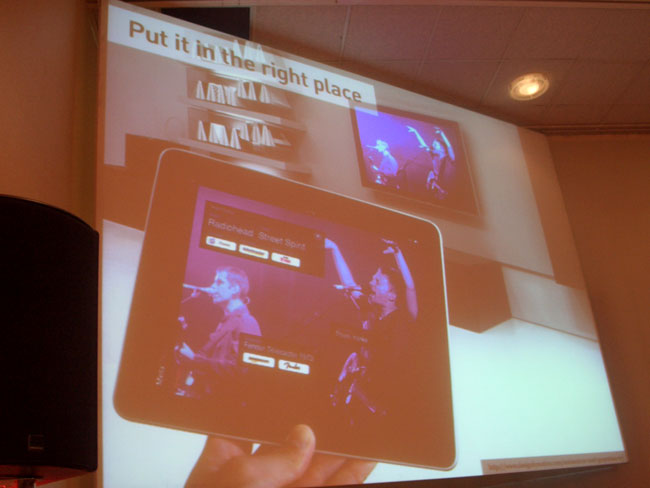 One of the slides in the presentation showed a user with an annotated and interactive version of a programme in their hands, synched with the version that they were watching on their television.

Here are Chris & Claire's slides - "Design beyond the glowing rectangle: what does the internet of things mean for UX people?":

I have never laughed at the idea of an Internet-connected fridge - it's one of the most useful things I can imagine. Nice insight about usefulness of networked devices that save waste.

One of the barriers to networked RFID and smart packaging is people's concerns over privacy. Selling the sharing of personal data to a business is very different to selling it to the public - But really it is only a matter of shifting perception. Swiping your grocery card is no different than putting a milk jug in your fridge that has a chip in it.