Protest and dissent at the London Olympics: Part 2 - Protests and disruption

On the opening night of the Games, London’s regular pro-cycling Critical Mass event was targeted by the police as the cyclists themselves targeted the Olympics. The police claimed that the group breached the regulations for the event. Alexandra Topping reported for the Guardian that Critical Mass had made this statement on their website in advance of the ride:

“Most London cyclists will know about the regular monthly Critical Mass ride this evening. Many will also know that the police seem concerned about it, because of all the Olympic traffic. It might be assumed that, as usual, the mood of Critical Mass will be to peacefully assert the right of cyclists to travel safely wherever they want in London. But in case the police – who normally leave Critical Mass alone – were to decide to intervene this month, it would be good to have lots of people prepared to be peacefully assertive.”

The BBC stated that over 130 of the cyclists were arrested, and the Guardian put the number at 181. These included Malaysian Aedewan Adnan who had cycled over 9,000 miles from India to be at the Games, raising funds for the Malaysian Olympic team and for charity. The Guardian quoted Adnan’s account of events:

“At 7pm, we left Waterloo Bridge, we just followed wherever the group went. Towards the end of the ride, we ended up at Stratford. Me and my cousin thought it would be okay as he lives near Barking and it is not far from Stratford. Me and my cousin didn’t know what was going on … there was word going around that we would be arrested for protesting against the Olympics. I told [the police] I was a tourist and I’d cycled to London for the Olympics. I guess that must have had an impact as I was released without any conditions.”

Other cyclists had bail conditions applied to them that prevented them attending Olympics tickets for which they had previously obtained tickets.

On the first day of Olympic competition, a march against the “Corporate Olympics” was held in London. It was attended by between 400 and 1,000 people - depending on whether you trust figures from the police or the organisers. 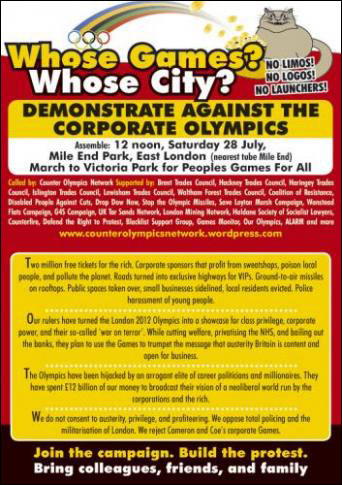 A leaflet for the anti-Olympics demonstration

The Counter Olympics Network, who co-ordinated it in association with 35 other organisations, described the protest as:

“An event which symbolically ‘reclaims’ the Games, a party to which everyone is invited. It will present a truer and more optimistic vision of Britain than the officially promoted one of a militarised and austerity ridden country that is content to be hijacked by millionaire politicians and their corporate friends.”

On 31 July the London Evening Standard reported a protest near the Olympic park in support of the Tamil population. Shekhar Bhatia wrote:

“Scotland Yard was today monitoring a protest by Tamil activists close to the Olympic park where a demonstrator is staging a hunger strike.

Gobi Sivanthan, 31, has a tent in Burford Road near the Olympic Stadium and has refused food for nine days. He plans to fast until the Olympics are over in protest against Sri Lanka’s participation, claiming the country should be banned for war crimes against Tamils in its long civil war.

About 200 Tamils were dispersed after trying to gather close to the park on hearing rumours that the Sri Lankan president was there.”

Disorder in the stadium

In what wasn’t a protest, but more an act of drunken delinquency, someone from the crowd threw a bottle onto the track just as the men were getting into position to start the showpiece 100m final. The moment was screen captured by Jon Gripton. 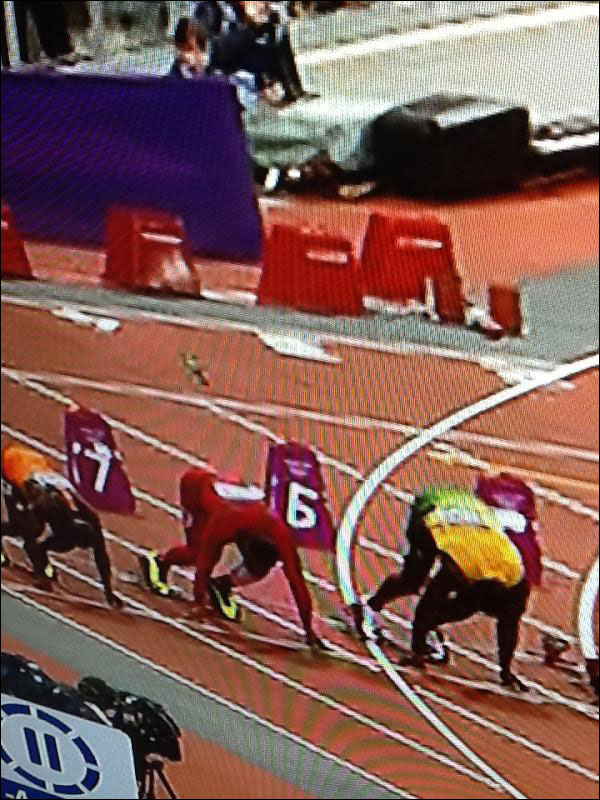 In interviews afterwards she said:

“There was a lot of commotion. I was just there to watch a fantastic event. I’m an athlete and a person who loves sports. Somebody came around who was having behaviour problems and was disrespectful in a big way. I did what any other person would have done and corrected it. I said ‘Man, you’re crazy. What are you doing?’

It’s because we are here for Olympic heroes, people performing on the highest level and we have to honour them and not disrespect them. The other 80,000 people were cheering for the athletes and that's the most important thing. The worst thing is that due to all the commotion and this guy I missed out on the 100m. I could ask Usain Bolt to run it again but I don't think he's going to do that.”

Athlete Justin Gatlin, controversial bronze medal winner in 2012 despite previously serving two drugs misuse related suspensions, said he had noticed it. “I didn't know what it was, but when you're in those blocks and the whole stadium's quiet you can hear a pin drop.”

Police arrested Ashley Gill-Webb in the stadium on “suspicion of causing a public nuisance”, and he was charged the following day.

Protest on the pitch

Park Jong-woo of the South Korean men’s football team was forbidden from collecting his bronze medal after holding up a political sign in a semi-final match-up with Japan. The sign alluded to a territorial dispute between the two nations.

In the third part of my round-up of protest and dissent at the 2012 London Olympic Games, I’ll be looking at instances of racism and sexism at the Games.