Protest and dissent at the London Olympics: Part 5 - Business and security

For weeks running up to the Games, Londoners on the city’s public transport network were bombarded with bombastic recorded messages from Mayor Boris Johnson warning of impending travel chaos. Several days into the Games, and it looked like the tactic was too successful. Non-sporting tourists were staying away in their droves, and businesses in the centre of town were being affected. Tower Bridge said it was seeing less then 50% of the visitors they would expect at this time of year. Under pressure from business groups, the warnings were dropped.

Small businesses in Greenwich were specifically aggrieved when, instead of an influx of additional custom, they found that security barriers prevented Olympic visitors to the Equestrian events from accessing their stores. The News Shopper website reported the frustrations of one trader, Lara Boyle:

“My blood is boiling over this, it’s an absolute disaster. It won’t ruin us but there are some traders in the town and the market who will go to the wall over this. All of us have employed extra staff and bought in lots more stock because obviously we were preparing to have tens of thousands of Olympic spectators in town. Then suddenly overnight before we arrived here on Saturday morning the Olympic security people had erected these large metal barricades and they were shepherding people all the way from Greenwich station to Greenwich Park inside them. They did exactly the same thing at the end of the events. No one was allowed to step outside of them so the town centre was like a ghost town. We’re all devastated and we feel totally betrayed because we had to put up with enormous disruption during the run-up to the Olympics but we were appeased with the promise that our businesses would boom during the games when all these thousands of people turned up.”

In the US, the New York Times ran a profile of Wymouth by Barry Bearak, venue for the Sailing events, depicting a town that was emptier than normal for the time of year.

“The Olympics were supposed to fill the town with a record number of visitors. Many of the hoteliers on the esplanade believed it. They saluted the coming Games by doubling their rates, a move predicated on presumptions of high demand. Instead, many front windows now display hastily posted ‘vacancy’ signs. Rooms are offered at a discount.”

The piece quotes Jed Marson, who had rented space at the Bayside Festival, an area for events and retail in the evening during the Olympics: “Our government is overprotective and overbearing, and it is their warnings about health and safety that has kept people away.”

Entertainingly Barry also quoted Zara, “the ‘renowned’ palm reader and clairvoyant with a hut on the beach”. “They hyped this Olympics way too much” she said. “Why hadn’t she seen it coming?” asked Barry.

In the run-up to the Games there was a great deal of criticism of the way that Trading Standards Officers and the LOCOG “Brand police” were heavy-handed in forbidding small businesses to celebrate the arrival of the Olympics with ring-themed window displays and unofficial bunting and the like. One company saw a PR opportunity though, and so wine merchant Oddbins announced that they would be giving a discount to customers drinking Pepsi, wearing Nike, or using Mastercard - the collective nemesis of the official Olympic sponsors Coca-Cola, Adidas and Visa.

Another brand to get past the vigilant eye of LOCOG was Dr Dre's Beats headphones. A lot of athletes were seen wearing them during their warm-up sessions, especially in the swimming, after the brand had distributed pairs free to Olympic competitors in advance.

War on Want’s anti-Adidas campaign also made an appearance at the Games, with a projection of their #notOKanywhere hashtag and slogan on a building near the Olympic park. 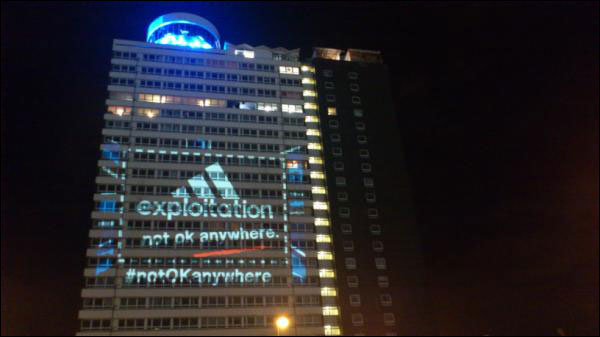 A protest against Olympic sponsor Adidas

Empty seats at supposedly sold out venues caused a great deal of upset in the early days of the Games. The organisers moved to change the allocation of seating, reducing the numbers reserved for the “Olympic family”, and redistributing those to be available for sale to the general public. Empty seats at venues were not a unique problem to London 2012 - in fact it is possible to find news stories on the internet bemoaning the vast expanses of empty seats at both the Beijing and Athens Games that preceded them. Plenty of seats are reserved for Olympic officials and other competing athletes, but there is no guarantee that they will actually be used on the day. The Tokyo bid for hosting the Games in 2020 has suggested that a mobile-based technical solution of virtual ticketing might solve the problem in Japan.

The ticketing website came in for a lot of criticism for the way it was developed. Users had to search for an event which showed it had “tickets available”, then choose the number of tickets they wanted and at which price. Only at this point did the system then actually look to see if the tickets were still available - causing a great deal of frustration.

Sebastian Coe defended the website on BBC television, saying that the website “wasn’t crashing” but that it was simply being overwhelmed by demand. LOCOG said that over two million people a day were searching for the few tickets that were becoming available.

The greatest tragedy to hit the Olympic movement was the 1972 terrorist atrocity, when eleven members of the Israeli Olympic party were murdered in a gun fight between German police forces and Palestinian terrorists. Since then there has been a constant struggle to try and get the IOC to provide a fitting moment to remember the deaths. A hastily arranged memorial service during the 1972 Games themselves was marred by some nations being allowed to refuse to fly their flags at half-mast, and by IOC President Avery Brundage making a clumsy link between terrorism and the peaceful protests against Rhodesian participation in the Games.

In 2012 there was a concerted effort to get the IOC to mark the fortieth anniversary of the Munich attack. Several memorials have been held at the fringes of the Games, but nothing official in the opening or closing ceremonies. The 2012 London memorial was held at Guildhall, and organised by the Israeli Olympic Committee. At it, Ankie Spitzer, widow of one of the victims, was vocal in her condemnation of current members of the IOC and LOCOG:

“Shame on you IOC, because you have forgotten 11 members of the Olympic Family. You’re discriminating against them only because they are Israelis and Jews. We will come back until we hear the words you need to say because you owe them. Those who forget history are bound to repeat it. Sometimes I wonder if I am the last person left who believes in the Olympic ideals. Is the IOC only interested in power, money and politics... did they forget they are supposed to promote peace, brotherhood and fair play? My husband Andre was chosen to go to the Olympics, probably with the same dreams as Jacques Rogge and Seb Coe when they went to the Games... the only difference is our loved ones came home in coffins. But they were members of the same Olympic Family and that is why we want them remembered as such. Not here in this beautiful Guildhall, not in the Hilton Hotel in Beijing, not in the backyard of our ambassador in Athens, but within the Olympic framework.”

All through editing “Keeping the torch burning” and in preparing this extra chapter, I had been dreading having to collect together press reports of a terrorist attack or security incident at the London Games. In truth, given the distribution of venues, the number of related “soft targets” and the size of British transport infrastructure, I found it very difficult to imagine how the Games could pass off without an incident. After the Atlanta bombing in 1996, some 30 hoax calls were made about bombs in the space of the next few hours, and someone even attached a fake device to an Olympic transport vehicle. With London’s experience of terrorist attacks by Irish Republicans and Islamic Jihadists, I couldn’t see how massive disruption wouldn’t be inflicted.

Thankfully I was wrong.

The failure of G4S to fulfill their contracts caused a great deal of security concern before the start of the Olympics, but in the end security forces only made a handful of publicly-known anti-terrorism arrests before the Games. Channel 4 news reported that the total number of arrests during the Games was 276. This included one under anti-terrorism legislation - a 17 year old male arrested “on suspicion of collecting/recording information of a kind likely to be useful to a person committing or preparing an act of terrorism” on the opening day, near Stratford Railway station. He was later released without charge.

In the next and final part of my round-up of protest and dissent at the 2012 London Olympic Games, I’ll be looking at the closing ceremony and bidding a sad farewell to the greatest show on earth. At least for a couple of years, anyway...