Protest and dissent at the London Olympics: Part 1 - Spectacle and television

“Last night’s Olympic opening ceremony was stunning. A glorious jumble of references and spectacles, mixing globally-popular elements with winking in-jokes for the British viewers. It spoke in enormous mile-high symbols of our history and life – not just in the bombast and belligerence of Bond and the Queen arriving by parachute, but also in the careful choice of the Brookside lesbian kiss and the Tardis noise materialising during Bohemian Rhapsody. These are huge chunks of culture, full of their own meaning and carrying their own symbolism; forging them into an event that had its own identity and was not overwhelmed by its parts is an incredible achievement. Danny Boyle should be proud.” - Mary Hamilton

Danny Boyle’s opening ceremony was broadly well received in Britain and abroad, if perhaps a little puzzling to those without strong ties to the UK or British culture. There was certainly a political element to it, with the very public championing of movements like the Suffragettes and Jarrow Marchers, and a tribute to the NHS.

Alex Wolff wrote for SportsIllustrated.com that:

“Artistic director Danny Boyle smuggled into the Opening Ceremony of the London Olympics a worthy and important thing. He gave us a chance to celebrate protest and dissent. Four years ago the rest of the world had a moment of collective sadness for the London organizers. No way could the stagers of the next Olympics possibly equal Beijing's lid-lifting spectacle. But tonight we learned that if the guy in front of you zigs, it's best to zag. Boyle spent almost four times less money and deployed roughly one-tenth as many people. But he outstripped the previous Olympic host city by flaunting what the Chinese actively suppressed.”

Not everybody was impressed. Conservative MP Aidan Burley tweeted:

“The most leftie opening ceremony I have ever seen – more than Beijing, the capital of a communist state! Welfare tribute next?”

He followed that up with:

“Thank God the athletes have arrived! Now we can move on from leftie multicultural crap. Bring back red arrows, Shakespeare and the Stones!”

Toby Young leapt to his defence on Twitter, saying “I think Aidan Burley’s account may have been hacked”, which only served to underline how damaging the message Aidan was sending was. As Nicholas Watt put it in the Guardian:

“The tweets will be toxic for the prime minister who has been praised for his handling of the preparations of the Olympics. Burley's outburst will fuel suspicions that some members of the Conservative party have unreconstructed views which fail to recognise the pivotal contribution to society made by black and minority ethnic Britons.”

Aidan Burley is no stranger to controversy. In 2011 he was sacked as a parliamentary private secretary after he was caught on film attending a Nazi-themed stag party complete with Nazi-style salutes and a toast to “the ideology of the Third Reich.”

Burley argued his tweet had been misunderstood, stating in a BBC interview that “I wasn't having a go at multiculturalism itself, I was having a go at the rather trite way, frankly, it was represented in the opening ceremony...we had all these rappers – that is what got me to the point about multiculturalism. Is that what we are most proud of culturally?”

Brendan O’Neill wrote for the Telegraph about the irony of criticism of Burley:

“The ceremony celebrated the openness and diversity of modern Britain and has been hailed as a wonderful spectacle of ‘inclusion’. Yet it seems our celebration of diversity does not extend to allowing any criticism of the ceremony itself; our inclusiveness does not mean we will include dissenting views on Danny Boyle’s vision of the New Britain. When it comes to the opening ceremony, you must conform and celebrate, or risk being cast out (of polite society).”

Writing for the Mail Online, Rick Dewsbury also took issue with the opening ceremony, particularly the portrayal of a happy family of mixed racial origins. In a paragraph that was subsequently excised from the article, before the piece was removed from the web altogether, Dewsbury wrote:

“But it was the absurdly unrealistic scene...showing a mixed-race middle-class family in a detached new-build suburban home, which was most symptomatic of the politically correct agenda in modern Britain. This was supposed to be a representation of modern life in England but it is likely to be a challenge for the organisers to find an educated white middle-aged mother and black father living together with a happy family in such a set-up.”

Later in the Games, after Jessica Ennis had taken the gold medal in the Heptathlon, an image circulated on the internet, contrasting Dewsbury’s assertion with the family background of Ennis. 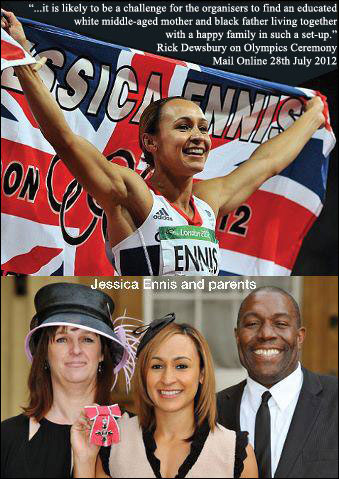 International viewers had some other issues with Boyle’s take on British history. Ranga Mberi tweeted from Zimbabwe:

“#OpeningCeremony segment supposedly showing the people who built modern Britain. But I don’t see many immigrants. OK Britain, we see you flaunting your history. Where’s the bit in which you invade, loot, kill and plunder?”

NBC’s television coverage in the US came under considerable fire. In an “always on” connected world, they continued to opt for showing the Games on television “as live” on a delayed feed in the evening, to maximise prime time audiences and advertising revenue. This was roundly criticised in new media circles, not least for a decision not to show the men’s 100 metres final live. Megan Garber for The Atlantic put the culture clash into some perspective:

“There are, actually, two versions of the Games this year. There are the events as we see them on TV, highly produced and heavily narrative and ad-filled and time-delayed; and then there are the events as they play out online, through live blogs and live tweets and athletes’ Instagrams and full, nearly real-time recaps. These two versions of the Olympics are the same thing only in the sense that, say, quiche and custard are the same: They take the same basic ingredient and, through cooking them differently, create two completely separate products.”

NBC researchers claimed that knowing the results in advance increased the number of people watching the delayed broadcasts. The AP reported that:

“NBC chief researcher Alan Wurtzel says that two-thirds of people who said they knew the results ahead of NBC’s tape-delayed telecast said they would watch the events anyway. People who watched the events earlier in the day via computer stream watched the tape-delayed broadcast for a longer time than those who hadn’t.”

Of the delay to showing the opening ceremony, NBC themselves said:

“We are live streaming every sporting event, all 32 sports and all 302 medals … The opening and closing ceremonies, however, are entertainment spectacles. Our award-winning production team will present them on a medium that best demonstrates their grandeur and majesty, and at a time when friends and family are able to gather together to watch, which is in primetime.”

The delayed showing of the opening ceremony still generated 5 million social media mentions when it was played in the US, making it, according to one source, the third biggest entertainment event in social media history. Although, presumably, if you counted the mentions during the actual live event, that figure would be a lot larger.

Figures showed that despite the complaints of the vocal minority, NBC’s approach was reaping commercial rewards. The Financial Times reported that the company “should break even on its coverage of the London Olympics, thanks to better than expected viewership and ad sales” after predicting a $200m revenue shortfall. This would be a significant financial improvement on the economics of broadcasting the previous couple of Olympic Games in the US.

NBC also attracted criticism for a decision not to broadcast the opening ceremony’s inclusion of a tribute to victims of the 7/7 bombings in London and other loved ones who could not be there. Instead, NBC showed an interview with Olympian Michael Phelps, conducted by American Idol’s Ryan Seacrest. One could only imagine the furore if the BBC had decided to opt out of a tribute to 9/11 victims that was part of any US hosted Olympic ceremony.

The curious incident of the silenced British journalist, Guy Adams, also involved the broadcaster. LA correspondent for The Independent, Adams had his Twitter account suspended, apparently for criticising NBC’s coverage of the Games. The tweet that seemed to have got Adams into hot water posted an email address of an NBC executive, urging people to complain to him about Olympic coverage.

“‘Your account has been suspended for posting an individual's private information such as private email address, physical address, telephone number, or financial documents,’ the company informed Mr Adams. ‘It is a violation of the Twitter Rules.’

In response, Mr Adams wrote: ‘I didn’t publish a private email address, just a corporate one, which is widely available to anyone with access to Google and is identical to one that all of the tens of thousands of NBC Universal employees share. It’s no more ‘private’ than the address I’m emailing you from right now.

‘Either way, [it’s] quite worrying that NBC, whose parent company is an Olympic sponsor, is apparently trying (and, in this case, succeeding) in shutting down the Twitter accounts of journalists who are critical of their Olympic coverage.’”

“Once again, we’re reminded of a maxim when it comes to publishing on other people’s platforms: we publish at their sufferance. But there’s a corollary: When they take down what we publish, they take an enormous risk with their own futures.”

Criticism of the BBC

In the host nation, television coverage was also criticised. In particular the coverage of the men’s cycling road race attracted complaints for having no on-screen graphics explaining the split times so vital to understanding the progress of the race. The BBC defended their coverage, firmly handing any blame over to OBS who produced it. The BBC man in charge, Roger Mosey, himself tweeted: “On road cycling, the BBC team shares the frustration about lack of graphics/info from the organisers.”

Brid-Aine Parnell reported for IT website The Register that ultimately telecoms network O2 were to blame - the GPS units on the bikes were unable to get a signal out to organisers, because the data network was saturated by spectators using their smartphones. Presumably mostly using them to try and find out what the elusive timings were.

In the next part of my “missing chapter”, I’ll be looking at protests and disruption at the 2012 London Olympic Games.