Yesterday I started a Christmas Countdown of the most popular currybetdotnet posts of the year - based purely on the numerical evidence supplied by Google Analytics. Never mind conversion rates, engagement, whether something went viral on social bookmarking or gained some decent referral links, this chart is purely based on that old-fashioned 'page views' metric.

10: Being an extra on John Fogerty's Live at the Albert Hall DVD

This post ended up becoming one of the references on John Fogerty's Wikipedia page. Basically, I paid a lot of money to fulfill a lifetime ambition to see John Fogerty live, but found that I and the rest of the audience were treated like TV recording extras rather than paying customers. The show was being filmed for a DVD release, and with make-up changes and interruptions the whole night was pretty much spoiled. 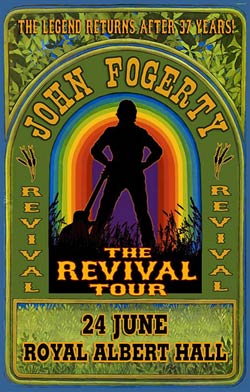 "A silly waste of licence-payer's money and another example of the relentless advance towards turning the Web into a Fisher-Price wonderland for simpletons." 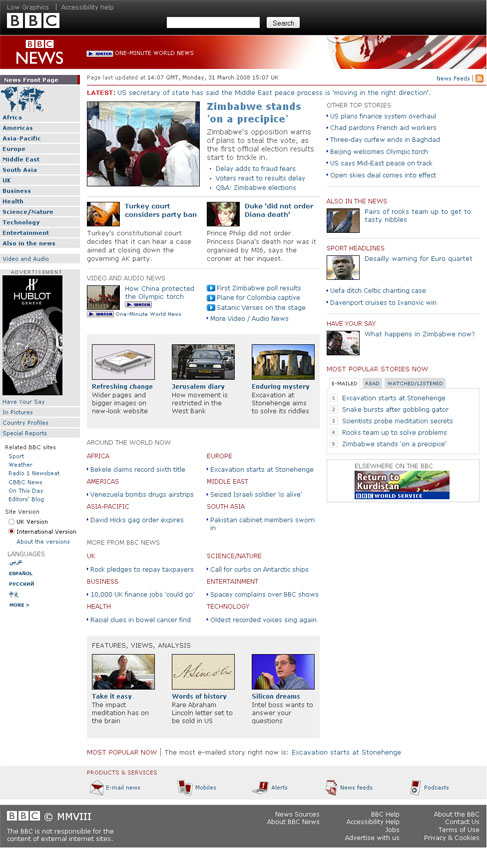 It seems that any web re-design brings out an army of "if it ain't broke don't fix it" naysayers. I did a rough'n'ready analysis of the reaction on the BBC's own website and found that 60% of people passing comment hated the new design. As you'll be aware, their judgement has been vindicated by the huge plunge in online usage figures the BBC News site has subsequently experienced... ;-)

I did make a serious error with this post, actually. I included some technical criticism alongside the design aesthetic criticism, which many people took to be me defending some horrible mark-up and validation errors.

"Normally I think you're quite on the money Martin, but I'm afraid quite a bit of the above is rubbish."

In retrospect I would have split this into two posts addressing different topics - and not included a 'humourous' dig at iPhone users, who steadfastly failed to see the joke.

8: 10 tips for integrating your del.icio.us links into your blog

For just about a year now I been including a daily 'linklog' post generated by the bookmarks I make on Delicious. It isn't the easiest of publishing mechanisms, and hasn't been perfect, but this list of 10 top tips on how to do it has proved very popular. 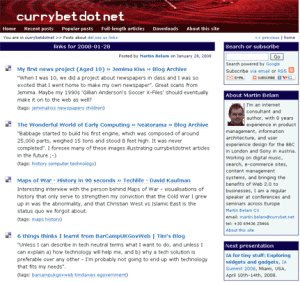 7: A lifetime of lost playlists: Part 1 - Pump up the volume

This series of posts was not just a lifetime in the making regarding the subject matter, but also took about 18 months from my first draft to actually putting it live. 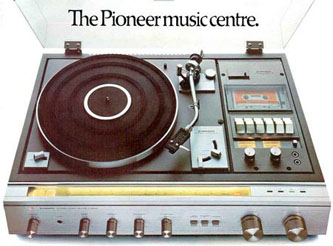 It tells the story of how the way I've organised and consumed music, and made 'playlists', has transformed over the last 30 years, as vinyl, cassettes, CDs, DAT and DCC, MiniDiscs, and then mp3s have all been touted as the 'state of the art' for music fans. 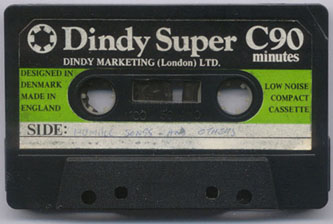 The opening part of the series was posted to Metafilter, which drove a lot of the traffic. 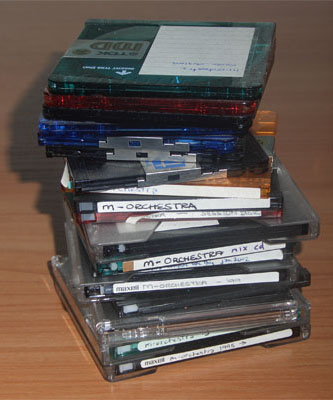 This was the opening post of a lengthy series looking at the protests and political controversies that have surrounded the modern Olympic Games. Even whether this is the first modern Olympics is disputed, as there had been earlier attempts to revive the Games in Athens during the 1800s. Evangelis Zappas funded some games in 1859 that were held in one the squares in the city. 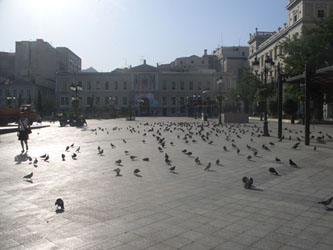 Alongside some strident Greek nationalism which declared that the Games should always be held in Athens, the main protest of note was by Stamata Revithi. She ran the course of the marathon to demonstrate that women were capable, and should be allowed to officially participate in the male-only tournament. 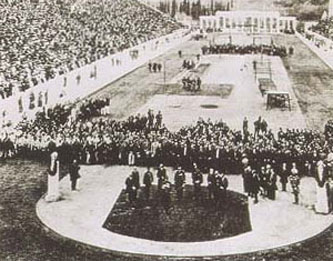 This is pretty sobering. Excluding the homepage, slotting in as the fifth most viewed page in this chart is the one that says "You are a spamming robot and I claim my £5". That is the kind of comment spam load the site is under. Thanks to mod_security, since around this time last year I've been heading most of this spammer activity off at the pass, and it doesn't get a chance to fire up the notoriously inefficient mt-comments.cgi script. Huh, the Internet eh?

4: A lifetime of lost playlists: Part 12 - Pretending to see the future

If the start of the ' A lifetime of lost playlists' series was made popular by Metafilter, the final part was made popular by Swells over on The Guardian music blog. He described list-making fans like me as "the antithesis of rock'n'roll", and promptly sent thousands of Guardianistas over to point-and-laugh at me in the style on Nelson Muntz. 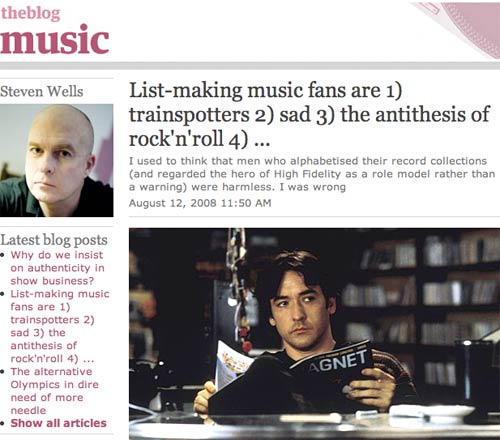 Google also joined in the fun. At one point the adverts they placed next to some of the articles in the series were things like "Do you need help with your autistic children?"

I'd been re-watching the early series of Buffy The Vampire Slayer, and came across the episode "I, Robot...You, Jane". In this, a demon invades the Internet - 1997 style. 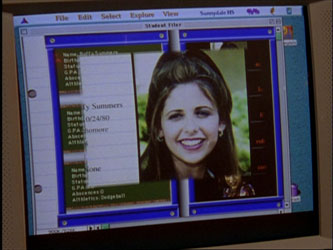 My article looks at all of the computer and technology in the episode. It determines whether Sunnydale High was a Mac or Windows school, what kind of UI demon possessed computer software has, and illustrates how techno-pagans build 'circles of protection' using chat room software alone... 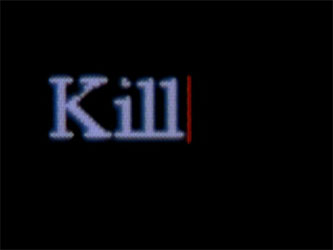 To be honest, I actually regard this as genuinely the number #1 article this year. The top two are there by virtue of being inadvertently ranked highly by Google for very emotive topical keywords. They got more traffic, but most of the people who read the top two articles bounced straight away or didn't get the information they were looking at. From the stats, I can see that the 6,500 people who read this post were nearly all Buffy fans, and nearly all read it to the end. 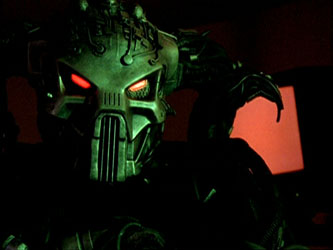 2: Protecting the identity of Baby P's killers: The courts vs the people vs the Internet

This was posted on November 17th, and I actually compiled these most popular stats on December 16th, assuming they would be pretty much accurate for the whole year. I mean, there might have been an unexpected late rush to view my post about the magnetic telegraph expo in Japan in the 1800s, but I doubt it. Such has been the interest in the 'baby P' case in the UK, and the power of Google, that it has taken just a month for this post to become the second most viewed article I wrote this year.

The piece itself was intended as commentary on the media reaction to the case, but instead, thanks to ranking highly for phrases like 'baby p killers', 'baby p identity', and 'baby p's mum', I got a lot of visitors wanting to know the names of the guilty.

I received death threats aimed at them via my comment system.

I received countless comments naming the individuals involved or explaining how to find out their names.

The post has been given a couple of 'thumbs up' on StumbleUpon which has driven more traffic.

And I even received one phone call on my mobile from someone so angry about the whole thing that they wanted to shout at someone, and, after a quick trawl of the internet, chose me.

This is actually a rather disappointing thing to have at number one. Basically, when I was visiting Macau earlier in the year, I did a series of posts about the visit. They included what I thought was some really interesting stuff about the Hong Kong TV archive, multi-lingual wayfinding and signage and David Beckham. It also saw my first foray into online video production, with "packages" devoted to information design on the transport system and visiting the Hong Kong EA Games Centre.

However, it turns out that getting a good Google ranking for a phrase like 'Edison Chen sex photo' was the main draw of the year. 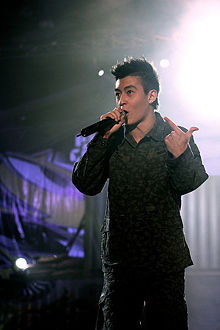 It was a big media scandal at the time I was visiting, and touched upon issues of privacy and web censorship. People in mainland China were going to prison for possessing or trying to trade the images. 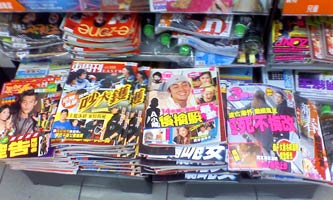 My post tapped into that wave of searches, and the traffic flowed.

And it doesn't even tell you how to view the photos.... 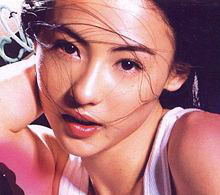 Tomorrow I'll be looking at some of the currybetdotnet posts from yesteryear which have remained popular.

Any chance we can see the least popular posts of the year?

(Loved the Buffy post by the way, I think it was my favourite thing you did this year)