Having opened the event with what Patrick Smith described as “an impassioned plea for iterative, responsive and nimble development run by small teams within big media firms”, my talk was followed by two case studies of pretty traditional approaches to digital magazine publishing from Stern and Condé Nast. I’ve already blogged my notes from those two sessions.

Stijn Schuermans brought a welcome change of pace and an outside perspective to the problems assailing media companies in the digital publishing space.

“Media publishers are behind the general developer population in targeting tablets, but intend to catch up” - Stijn Schuermans

Stijn Schuermans is a Product Manager at VisionMobile, a company who carry out research, and work on strategy around the app economy. He opened by saying he felt a bit out of place, as he was the first speaker on the day who obviously didn’t have a media company background.

Stijn told us that his company’s research showed media companies go through three distinct phases of adapting to apps and mobile. The “newbie” phase, he said, was when some bright spark decides that a company “must” have an app. They’ll usually choose iOS, out-source the build, give it away for free, and not really have a business model behind it.

After that, they graduate up a level to being “street-smart”. Now they are looking at how mobile apps could support their core business, and it is the head of marketing who is driving the requirements for brand extension, or for having a presence across a range of platforms.

Finally, the company wakes up to the potential of the mobile future and is a “connoisseur”, realising that this could be a brand new revenue stream in its own right. The recently appointed Head or Director of Mobile (and/or emerging platforms) is the one issuing the rallying cry.

Stijn was also presenting the results of some survey work carried out which compared the position of media companies relative to “general” app developers. This suggested, perhaps unsurprisingly, that media businesses are a little bit behind the curve. 50% of “general” developers target tablet devices, but only 42% of media companies do.

Media companies also lag in revenue terms, typically earning 15%-20% less than the benchmark levels of other types of apps. He also noted that subscription revenue was very low in the mix. Media companies tend to have apps with a business model based on advertising and brand awareness, which puzzled Stijn a little, as publishers have worked with the subscription model for print products for decades.

He also added that less than 10% of media companies currently have plans to tackle internet-connected TV as a platform, but it does at least appear that 1 in 3 intend to in the near future.

During his talk Stijn showed us a lot of charts, reminding us that there is an app for every occasion, and that even by the broadest definition, “media” only accounts for about a quarter of the apps on offer to smartphone and tablet users. He argued that the reason that iOS and Android have become so dominant is because they create a “positive feedback loop” between users and developers. Because there are lots of apps, users are attracted to the platform. And because there are lots of users, developers are attracted to build in order to reach that install base.

He suggested there were around 700,000 iOS and Android apps available, with a second tier of platforms like BlackBerry adding another 100,000. The number of apps creates a discoverability problem for users, and makes for a tough competitive landscape. This is one area where I think that big media companies need to be mindful of the advantages that they do have in the market — established brands and distribution channels that most start-up developers could only dream of attaining.

Stijn also showed this rather scary graph — rather scary if you aren’t a particular fan of monopolies that is. 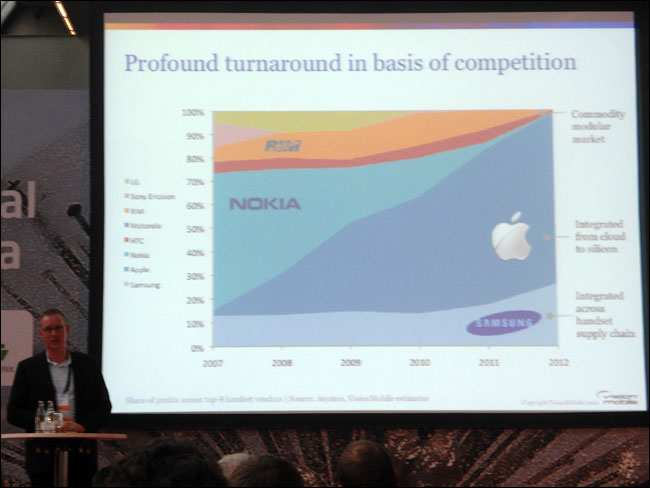 The chart depicts how Apple’s dominance of the market in handset sales has effectively destroyed the profits of companies like Nokia and RIM. As much as we can fault bad management and strategy choices at those companies, it cannot be healthy for one company to have such a stranglehold on revenue generated from phone sales. Even if they do make pretty phones.

Stijn said that this scale of disruption was also threatened in adjacent markets like media, travel, and gaming. As Philippe Jannet and Caio Túlio Costa’s talks showed on the day, some national markets have been more attuned to tackling this threat than others.

MobileVision make available a lot of their research, and Stijn recommended we read Developer Economics 2012, a report on “developers, apps and the new mobile economy.”

As I touched on above, there were a couple of presentations on the day about how newspapers had banded together to challenge the dominance of companies like Google and Apple as distribution channels. Next up I’ll have my notes from a session by Caio Túlio Costa examining the situation in Brazil.