Condé Nast were represented at the Tablet & App summit by the duo of GQ publisher Jamie Bill and Jamie Jouning. The two Jamies were showcasing the work the company had done to move into tablet publishing in a fairly short space of time.

Jamie Jouning said that print still “pays my salary every month” and that their publications are very stable. Digital wasn’t a replacement, but it was an opportunity. Jamie Bill was perhaps more strident, suggesting that tablet publishing was “a genuine game-changer”. They’ve also actually seen growth in the sales of a print title like GQ since launching tablet editions.

They were very much viewing their business through the prism of increased reach. With digital properties included, GQ reaches around 800,000 people in the UK, compared to a print-only reach figure more in the order of 350,000. Jamie Bill contrasted this with the viewing figures of Episode 3, Series 5 of Mad Men in the UK. Transmitted on Sky, the audited audience figure for it was 47,000. That week GQ had a massive feature with the leading actor, and Jamie Bill said that with that kind of reach, magazines were now in a position to compete with broadcasters for advertising revenue.

I must confess it wasn’t an angle I’d previously considered when looking at reports of Condé Nast’s performance. And certainly, given the increased production costs and effort with publishing the digital editions, I’d be disappointed with the sales figures. Nothing they showed appeared to be selling more than a few thousand copies of each issue digitally.

Nevertheless they’ve clearly got the budget to do some interesting creative work, as the video cover to their comedy edition showed. It also demonstrated that as a brand they have the kudos to get top talent in front of the camera to produce this kind of material, something that few publishers could pull off.

Jamie Bill said they were at break-even point after a first year of publishing tablet editions, and I’m assuming that one reason isn’t the cover price or the sales figures — which, after the 30% Apple tax and VAT always generate a lot less cash than you’d want them to — but the impact on the advertising market. The presentation showcased some interactive ad creative produced within Condé Nast titles for brands like Mercedes Benz, Bally and Louis Vuitton. They also charge advertisers for links embedded into the editions.

When I saw the interactive ads demoed though, I was reminded in parts of a talk I saw a in March 2011 at Hacks/Hackers in London, about the production of The Times’ Eureka iPad app. Design Editor Matt Curtis spoke about the editorial obsession with having things that moved and could be spun around by the user, regardless of whether the user was actually going to want to spin things around.

A constant theme during the Tablet & App summit was the relationship between publishers and Apple. The Condé Nast team made it clear that they wanted their titles to have a presence on any newsstand in the digital world, and that iTunes wasn’t the only game in town. Nevertheless Jamie Bill said the company were “very grateful to Apple to enable us to be where we are today” and didn’t see any change in the power they wield in the short-term, but moves like putting GQ into the Amazon store showed that they were committed to sell wherever they could.

Jamie Bill said that in the end, with the shift to digital publishing, the biggest challenge hadn’t been the technology or the monetisation or the marketing. It had been managing the people. It was a big transformation for the business, and changing the magazine design had put “a huge amount of pressure” on the workforce. They demonstrated this with an excellent visual stunt - the two Jamies unfolded a long strip of paper that represented all the individual pages of a magazine, followed by a much longer and more complex looped strip of paper that represented the work involved in preparing the digital editions. 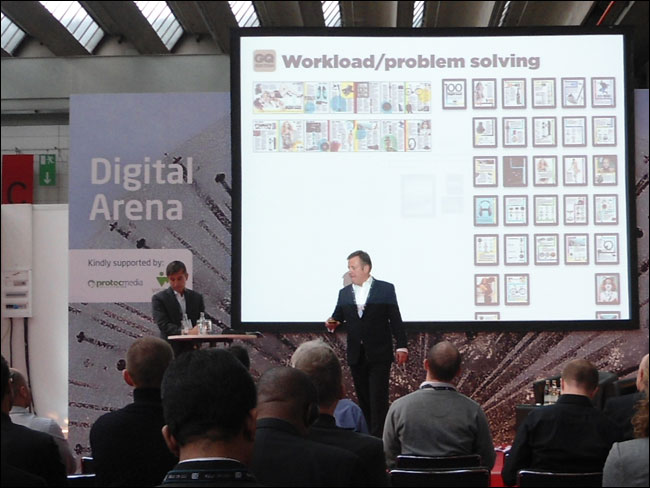 One thing that very much caught my attention was that they are obliged to include 95% of the print magazine content in the tablet version in order to meet the threshold for digital copies counting for their audited circulation figures. It reminded me very much of working in record shops during the eighties and nineties, where the rules on chart inclusion — and trying to dodge around them — were the reason the industry spawned multi-format singles and “limited” editions. Those releases didn’t really have the audience in mind, they were all about manipulating the chart. Likewise, it felt like during the production of this type of tablet representation of a magazine, it meant you wouldn’t care too much about tailoring the content to the digital format if it was going to mean you didn’t hit the arbitrary 95% limit set by the industry.

Patrick Smith has written up his take on the talk for The Media Briefing: “Don’t panic: ‘Tablet publishing will ensure our future’ say Condé Nast publishers”

When I think about the business choices that Condé Nast have made with their magazines, I am minded to think of Karen McGrane comparing their approach with that of NPR’s “Create once publish everywhere” strategy. She said of Condé Nast:

“It’s like you see them saying, “If only we could just take pictures of our magazines and put them on the iPad, then we can go back to the way it was in the 1980s when everything was great for our industry.”

After two very traditional presentations about making near-facsimile copies of print magazines in digital, my next set of notes will be about a talk that compared the efforts of media companies with publishing apps with app development more generally.