I've tried to piece them into a narrative of the development of the site, and each day this week I've been going back in virtual time to expose some of the hidden archive gems of bbc.co.uk. So far I've looked at the Budget 97 site from November 1997, September 1997's Diana Remembered, the Politics 97 site, the BBC's first online coverage of a General Election and the 1996 Budget.

(There has also been a slight side-step in time and space for Friday's April Fool post about the BBC having a Doctor Who site for the 1996 TV Movie).

Today is the final part of the series, looking at what I believe is the oldest site on bbc.co.uk - Budget 95 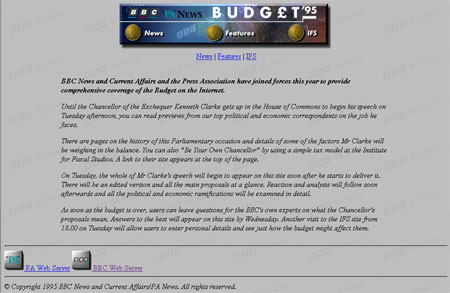 Of all the sites I've pointed out over the last few days, this is actually the hardest to find. From outside the BBC if you simply aim at bbc.co.uk/budget95 you get a 403 Forbidden error. With a tweak to look for bbc.co.uk/budget95/index.htm you will get a page re-directing you to the 1997 coverage of the Budget which I looked at on Thursday.

Within the BBC, to help with web development, we see the 'live' site from a specific server with a slightly different configuration - and that means we can peek at directory listings instead of getting the 403 error the public see. Whoever updated Budget 95 did a good job in deciding to change filenames, rather than delete files - which preserved the original content. In fact, a previous re-direct page from 1996 can still be accessed. What remains of the original 1995 site can be found at http://www.bbc.co.uk/budget95/index2.html

The Budget 95 site was a joint production between BBC News and Current Affairs and the Press Association. A lot of the links and assets are broken, but enough remains to get a feel for what the site was like. The principal navigation was an image map banner dominating each page, but without the correct server-side configuration it no longer works.

Another page that survives is the (broken) promise of live coverage 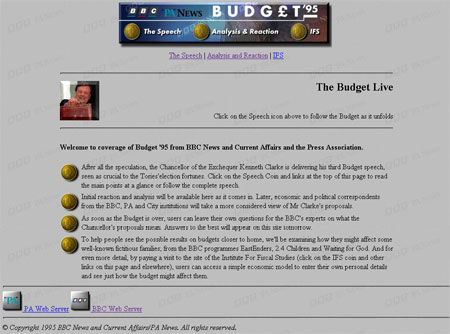 According to the timestamp on the files, the site was shunted aside to make way for Budget 96 on 14th November 1996, but the majority of the assets were last touched on November 23rd 1995. At nine-and-a-half years old, to my knowledge, these are the oldest available files on the live bbc.co.uk servers.

I was just curious to look at old BBC websites and find how they were set up, how far it had all come and when the BBC had first got involved with the web.I came across your investigation from a few years back. Unfortunately the links to Budget 1995 do not seem to work anymore. Have these pages become unobtainable since your original posting.

It is interesting to think that in the future some of these old websites will become sought after as internet nostalgia. Or perhaps not, it all moves so fast these days will anyone be interested. What other major sites will be looked at a innovators of the web?