I've tried to piece them into a narrative of the development of the site, and each day this week I've been going back in virtual time to expose some of the hidden archive gems of BBC.co.uk. I started by looking at the Budget 97 site from November 1997, and Diana Remembered from September 1997. Yesterday I looked at Politics 97. This entry looks at the BBC's first online coverage of a General Election in the UK - Election 97

The site now states that it is closed, and directs the user to BBC News Online. However, much of the content remains. In fact there are still the profiles of around 4,000 electoral candidates from 1997 stored on the BBC's live servers - although you can only access them by directly calling the individual URLs.

Of course, even if the HTML survives, there is no guarantee that the dynamic applications attached to a site will - and that is the case with the Election 97 site. Sadly Peter Snow's Swing-o-meter no longer swings. Clicking on the graphic causes the site to open up a thoroughly modern BBC 500 Internal Server error page within the frameset.

Likewise the Virtual Election '97 calculator no longer predicts the future political landscape. Written by Tom Payne of Cambridge University the application allowed the user to enter a share of the total votes for each major party. In the deluxe version users could even select the extent to which tactical voting would influence the vote for each party, and the algorithm would then predict the outcome for Britain's eagerly awaiting huddled masses. Now, whatever you enter, you get a server error.

There is a valuable lesson here in the physical possibility of archiving sites. It is relatively easy to mirror and archive the file structure of a website - but it isn't so easy to 'archive' dynamic web environments. Even if the code for the Virtual Election application was still on the live servers, there is no guarantee that 8 years down the line it would still run on the server configuration we use. In order to retain the whole user experience, not only do we need to take snapshots of the website, but we need to take snapshots of the type of equipment, the versions of languages, and server configurations.

Elsewhere on the Election 97 site there still exists a series of transcripts of online forums where users were able to email in questions for various ministers and would-be ministers. I noted Geoff Hoon, as spokesman for technology, sporting a rather nifty tache. 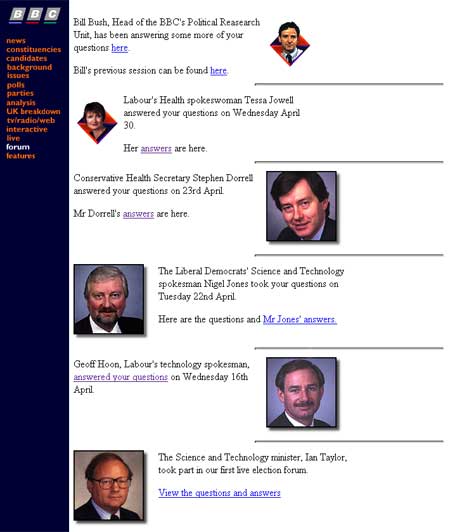 He signed off from his forum with:

Very many thanks for all of your questions which I have been very pleased to try and answer. If you would like further details about any aspect of Labour Party policy please look at our web site, which can be found at http://www.labour.org.uk. If you would like to contact me directly, please do so by emailing me on labour-party@geo2.poptel.org.uk

Look how complicated that email address is to remember - with the Labour Party not posessing its own email addresses at a domain level. Compare that to the pre-election adverts in the papers over the last few weeks from the Conservative party which make a virtue of being signed by Michael Howard above his 'personal' email address michael.howard@conservatives.com

The results page on the site must be one of the first examples of the BBC responding online to a 'breaking news' story - and it is still frozen there in time. Breaking out of the standard navigation for Election 97 at http://www.bbc.co.uk/election97/live/index.htm you can still see a complicated frameset given up-to-date totals for the parties in the left-hand nav, with a news-flash that the final result is LibDem gain Winchester, plus a mini-frame at the bottom declaring "Tony Blair is the new Prime Minister - Biggest Ever Labour Majority"

Tomorrow I'll be looking at a site which survives from 1996, and I'll be moving away from the realms of news and politics into the realms of time and space and entertainment...