The final session at news:rewired on Friday was a panel discussing the medium of live blogging, expertly hosted by Marcus Warren from the Telegraph, and featuring my colleague Guardian Blog’s Editor Matt Wells, Anna Doble of Channel 4, and Paul Gallagher of the Manchester Evening News. It was a really good session, with some good natured rivalry between the Telegraph and Guardian on display, and it really felt like the conversation has moved on from “What is live blogging and should we be doing it?” to “How can we use this new uniquely digital media to its best advantage and develop it further”.

Matt Wells on live blogging at the Guardian

Matt opened his talk by referring to the blog post “The Guardian Newsblog and the death of journalism” which I’ve written about on currybetdotnet previously.

One of the criticisms in the original Louse & Flea blog post was that the Guardian’s live coverage of the Christchurch earthquake had “no structure”. “That’s kind of the point”, said Matt. He argued that the inverted triangle format of yore tended to force journalist to pick a certain lead line out of a complex set of events, which almost always ensured that they sensationalised one aspect of the story to the detriment of other aspects. As an example, Matt quoted someone from the New York Times expressing the frustration that journalists will obsess with incrementally updating the wording of the 34th paragraph of a report, without changing the headline or letting the audience know that something had changed.

Matt thought this “artificial construct” of the inverted triangle is one reason why journalists are generally distrusted. Although, in fairness, a couple of people on Twitter chipped in that “making stuff up” and phone hacking were other reasons to distrust the press.

Matt identified three key strengths of the live blog medium, beyond the fact that it is uniquely digital. He said live blogs were:

For the Guardian, Matt said the “light-bulb moment” about live blogs was the 2010 General Election campaign in the UK, when they had the courage to lead the site with the live coverage. 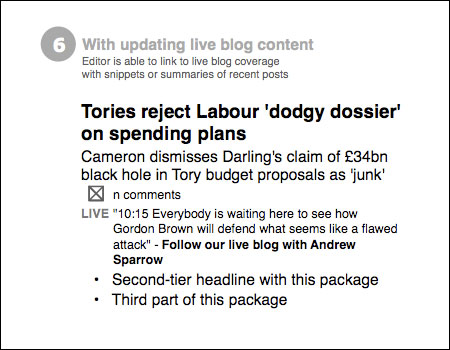 Live blogs were not without their problems, Matt said. If you come in halfway through a live blog, it can be hard as a user to fathom out the who, what, where and why of the story quickly. He thought the recently updated BBC live pages were the best at sign-posting this now. He also said that the sheer number of comments and interactions with users can overwhelm a live blogger whilst they are also trying to produce content.

You might also be interested in a couple of other things I’ve previously written about Guardian live blogs:

Paul Gallagher on live blogging at the Manchester Evening News

There has been a lot of doom and gloom around regional press coverage in recent years, and so I genuinely found Paul Gallagher’s talk about live blogging at the Manchester Evening News uplifting. Their coverage of an EDL protest in town saw them beginning to turn their digital news from a product into a service for the community, and they’ve done around 300 live blogs in the last eighteen months - including, inevitably, snow.

They’ve used the format to invigorate their coverage of local democracy. They now live blog a lot of council meetings, bringing together tweets from councillors in the chamber, activists in the viewing gallery, their journalism and comments from the community. In his talk elsewhere on the day, Lichfield blogger Philip John complained about a lack of enthusiasm from local press journalists for covering their patch, but the MEN seems to have got out of that rut. Paul Gallagher argued that their political coverage was now better than it had been for some time, if not the best it had ever been.

One interesting aspect was Paul saying that he didn’t think journalists needed specific training to live blog, and at the Manchester Evening News all of the news room is capable of doing a live blog, whilst doing their regular print-based reporting and storytelling at the same time. Paul said that they had got over the natural instinct to hold back a line or a good angle on a story for print the next day, and instead go live immediately on the web.

Everybody in the web industry loves a good anecdote about when one of our parents suddenly grasps what we actually do, but Anna Doble had one which made her realise that live blogging was working for the audience. Her mum had phoned her up during some news event or other, and told Anna that she had three tabs open in her browser. In one was the live blog from the Guardian, in another the live blog from the BBC, and in the third the live blog from Channel 4 news.

Anna thought that the Channel 4 News team had such great personalities, that it seemed a shame to just cram them into one hour in the evening. Instead they used live blogging and social media to build up an expectation around what was going to be in the evening show, and make more of their resources. They had now got used to even sharing some video packages in advance, or grabbing the reporters at their desks and getting quick bits of analysis during the day which go up online.

Although the news team at Channel 4 hadn’t taken much convincing to get involved in Twitter and live blogging, what had made a key difference, Anna said, was co-locating the live bloggers and the digital team right in amongst the news desk and TV production desk. It made for a much more integrated and successful operation.

At the end of the session, Matt Wells picked up a question on Twitter that had been asked about the technology that news organisations use for live blogging - specifically why most newspapers and the BBC seemed to favour in-house solutions, rather than using off-the-shelf or on-the-web tools. At some point over the next couple of days I’ll be blogging some thoughts about that.

Matt mentioned, "it can be hard as a user to fathom out the who, what, where and why of the story quickly". I believe this is more of a challenge of the presentation and delivery of the individual blog posts. With better technology and perhaps some user testing, this could potentially be overcome by better categorization, indicators, linking of the stream of posts, and perhaps a common "header/footer" which puts the individual posts in context with the rest of the story.

I couldn't agree more with Matt. Most newsworthy situations are far more complex than generally reported in tradional media. Live blogging seems more organic, and tends to capture the mood, and sometimes chatoic nature of the event.

i think that Twitter is actually a much better way for people to stay up to date on a live/fluid situation. The Live Blog cannot be updated as quickly as twitter. I've been a part of many live blogs before and I always leave with the same opinion: it was informative but not so easy to follow. People should LiveTweet instead of Live Blogging, in my opinion.

The commenter @Jimmy is so right, he wrote exactly my words. Matt is absolutely correct about the approach and live blogging.

By the way, really like your MINIMAL blog design. Loads at a rocket speed and usability is just perfect. Thanks.