Opening up data, and the future of IT - Krzysztof Trzewiczek & Tomasz Kopacz at the Polish IA Summit

I’ve just come back from Poland, where I was giving the opening keynote session at the Polish IA Summit, and this week I’m posting my notes from the rest of the sessions I saw in Warsaw. Yesterday I started with presentations which both looked at design processes involving children by Hubert Anyżewski and Agnieszka Szóstek. Today I’d like to focus on the talks by Krzysztof Trzewiczek and Tomasz Kopacz. 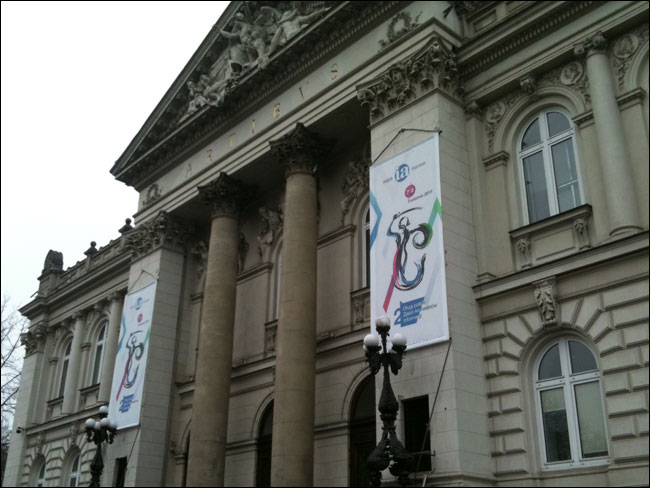 Krzysztof Trzewiczek - “The publication of the state budget”

This talk was about opening up civic data sets, specifically the Polish state budget. Krzysztof name-checked data.gov.uk and “Where does my money go?” in his talk. He put up an impressive slide full of acronyms that testified to the open approach of their project, which was all about republishing data in the easiest possible ways to re-use.

Krzysztof was adamant that the focus was not on making pretty data visualisations, but on practical applications for data. “We don’t want to focus on the data itself”, he said, “but how people work with the data”. Indeed, one of their target user groups seemed to be civil servants who find it hard to get the information and statistics they require out of the silos of a different ministry from theirs. 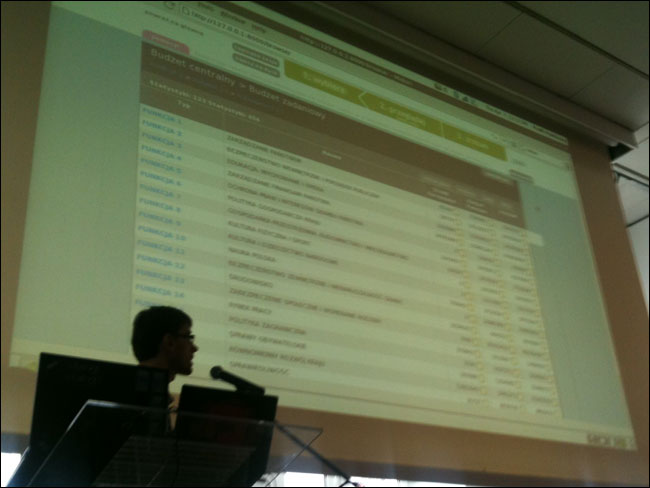 Krzysztof Trzewiczek in front of his budget data application

At the end of the talk, Krzysztof asked for feedback from the audience on the tool, saying that showing it to this audience was a “milestone” for the project. I was reminded of Adam Connor and Aaron Irizarry’s Denver IA Summit presentation on “The art of critique”. Suffice it to say that the conference room setting, with the person receiving the feedback being on stage, seems a less than ideal situation to receive criticism in, however well intentioned it was.

One point in particular stood out though, which I thought applied very much to us back in the UK as well. It was suggested that whilst the language and slang of the budget documents were obscure outside of the ministries, those were the documents they worked with and language they used. Providing a tool steeped in the language of data mining and the web may not be the way to attract that specific audience group to use the tool, given that it may seem just as obscure to those inside the ministries.

Tomasz Kopacz of Microsoft gave a wide-ranging and energetic talk that included lots of vintage computer pr0n, and a slide that showed that Microsoft had the cheek to describe the version of Paint that shipped with Windows 1.0 as “an illustrator’s studio”. 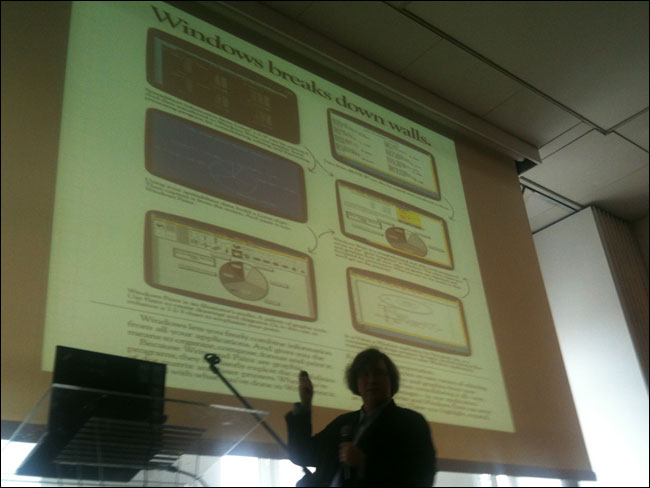 Tomasz Kopacz and images of Windows 1

His description of the evolution of business computing was rather more spot on than that claim though, particularly when he showed a chart equating the cost of computers to Volkswagen Beetles. If you’ve just bought a mainframe machine worth 45 cars, his argument ran, you are going to try really hard to find a way of monetizing that resource or driving cost savings with it.

He expressed concern that in the past, hardware development had out-paced software development, and products were launched with high hardware specs and features that people didn’t really know what to do with. This had given scope for great innovation - and because technologists and scientists were in charge, nobody really worried about this over-specification.

This, he said, is changing, as control of software design and the ubiquity of computing means that more and more people have an input into how systems and devices are built. They are now in much better positions to argue that you can save money by using lower spec components, or not including hardware features that appear to have no real use. He cited “surface computing” as an example, where they have very powerful devices, but little practical application, and seemingly little interest in investing in the necessary software development on a platform that could prove to be revolutionary.

Tomasz also painted a picture of the very near future when people begin to assess the real impact of IT use on the level of carbon emissions, and seemed to think it inevitable that computing devices would become eco-rated based on their performance.

Tomorrow I’ll have my notes from the talk that opened up the second day of the Polish IA Summit, an entertaining exploration of the field of search by Marianne Sweeny.