The two-sides of Wikipedia

It seems like sometimes Wikipedia can be its own worst enemy.

I was singing the site's praises last week. I'm trying to arrange some evening dates in August, and I wanted to make sure that I didn't miss the chance to laugh at Tottenham failing to get through the opening qualifying round of the Champions League. So I headed to UEFA.com to find out the dates for next year's competition, without success. Their website is still all about this season, and the calendar is all about matches in the past. Presumably the new dates won't appear until some co-ordinated press launch for the competition later in the summer. Wikipedia, of course, already has a page for the 2010-11 competition in place, with all of the dates for the rounds and just the information I needed.

However, today I was presented with the worst side of Wikipedia.

I was looking to put some slides together to illustrate the principle of using linked data and MusicBrainz IDs together to aggregate content. I decided to use Swedish band First Aid Kit as my example, as they have a name which is an ambiguous search term, and, in fact, they aren't even the only band called First Aid Kit. It should have been a great example of the power of the unique MusicBrainz ID.

And then I found that their Wikipedia entry has been deleted, because the article didn't 'indicate the importance or significance of the subject'.

Type 'planet endor site:en.wikipedia.org' into Google, and you'll find that Wikipedia still has plenty of room for multiple entries referencing a fictional planet in the Star Wars universe, including a 1,000 word entry on the 'Chewbacca defense' about a 15 second segment of one episode of South Park.

But First Aid Kit clocking up over a million YouTube plays of their Fleet Foxes cover version, playing festivals all over Europe, and releasing two albums doesn't qualify them for a Wikipedia entry anymore, because the person/people who wrote entry didn't pay enough attention to proving their wider significance. Bonkers.

Anyway, the strength of Wikipedia is that it is self-healing right? I can just easily correct a problem on the site, yep?

Well, not once an article has been deleted it seems.

In order to restore an article about a real-life band who sell records, are a 'YouTube sensation', and have lots of press coverage, it seems that I have to spend time entering a debate with the person who deleted the article, to try and convince them that they were wrong. Only an administrator can overturn a 'speedy deletion'. In the meantime, the fact that the article has been deleted breaks pages that rely on linked data like the First Aid Kit BBC Music page. 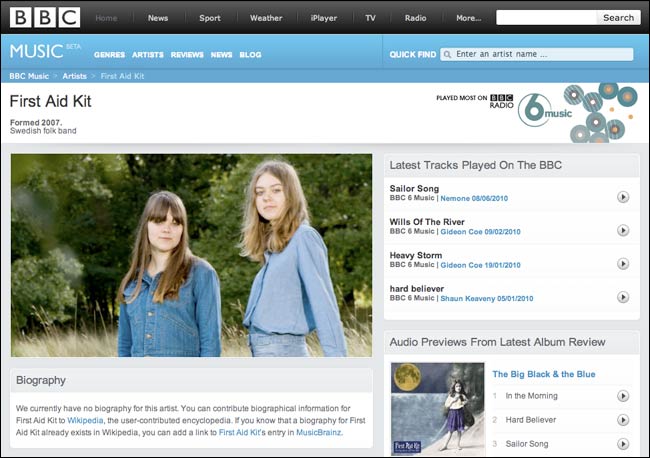 It really shows the two sides of Wikipedia. On the one hand, a wonderful resource where information gets published well ahead of the old style controlled drip-drip of embargoed sports fixture details. On the other, a site where the whims of one established Wikipedian can wreck useful resources around the web, because they delete articles based on internal Wikipedia logic, rather than on doing research.

Anyway, to cheer you up, Wikipedia entry or no Wikipedia entry, here is the beautiful 'Tiger Mountain Pleasant Song' from the band's YouTube channel.

UPDATE: A helpful Wikipedia admin saw this blogpost and restored the band's page - thank you :-)

You make a good point - but what's your proposed solution?

I did a lot of work on village entries in Mid Norfolk. General interest really - walks, local celebs, history, etc. 50% was later deleted as unencyclopedic. God forbid you should ref a related site. Gave up in the end, who gained from that debacle?

For me, this story has two parts:

- On the one hand I learned something about Wikipedia's editing procedures, which I (being only a casual contributor) was not aware of. (and yes,..somehow crazy...even if I also saw discussions, whether another party is entitled to create an entry in wikipedia))

- The much more important lesson learned here is, that we have to spend some thoughts on how we want apps to react on any kind of changes in their underlying data basis.

I compare this this with the my early MS Office lessons, where somebody told how to do a proper 'referential integrity' setup in Access: we just have to define (and implement) how a system should behave, when the data basis changes (e.g. a band is erased from history, or a product is taken out of a catalog).

Technically LinkedData provides means to be not completely dependent on one datasource only, as other datasources may still describe the band as existing. But is the right decision to keep the band anyway? Given you had an authoritative entity listing, I would expect an app to ignore this item (based on the information that the main data source says 'it is not there anymore').

For business critical applications this kind of maintained data integrity is a must: just imagine an online shop remembering deleted credit card information,(" just because of it might become relevant later on again"). (Somebody might ask you later from a compliance point of view, how you you were able to use/reference the earlier credit card information)

These challenges have already been present in the RDBMS area, and there are (technically limited) solutions out there. For LinkedData and SemWeb apps, these solutions/features still need to be created/implemented (as far as I can see the market for tools/COTS software).

A community member with a chip on his shoulder once decided to nominate one of my sites for deletion.

When I pointed out that this nomination was someone who had just been banned from the site in question, I was told that such 'personal attacks' were verboten. When I instead tried to argue the merit of the deletion, I was told that as someone involved with the subject at hand, I shouldn't even be involved in the discussion. When I (or anyone else) posted a warning from within the community drawing attention to what was happening, it was decried as 'canvassing' and used against us.

It shouldn't have been deleted in the first place, but the original was blanked after it was declared a copyright violation of another website and the person who spotted it in its near-blank stage didn't investigate.

However, it really needs some work to expand it, and I have no idea about the band (I'd never even heard of them).

Thanks for bringing it to our attention!

Unfortunately, deletionists are the scourge of Wikipedia.

Who wins? To be honest, nobody.

I've seen pages deleted on the argument "well, I've never heard of it".

That is - I thought - what an encyclopaedia is all about.

I guess this is what happens with free, user-edited encyclopedias like this. While this sort of thing happens often and is pretty much unavoidable, I think it's definately true that the good parts of Wikipedia far, far, far outweigh the bad.

it seems to be relevant at least for the German wikipedians:

I know that the different language Wikipedia installations are not legally affiliated with each other but still it's very confusing that WP EN deletes articles that WP DE credits relevant.

>you'll find that Wikipedia still has plenty of room

On Wikipedia, length does not equate with importance, space is virtually unlimited

perhaps there was a bad call in this specific case, but in general rules like this protect Wikipedia's quality

>Anyway, the strength of Wikipedia is that it is self-healing right? I can just easily correct a problem on the site, yep?

>UPDATE: A helpful Wikipedia admin saw this blogpost and restored the band's page

This was a very interesting post, most of the complaints about wikipedia are from student friends who have used it as a reference and it come back to bite them. Not as perfect as it seems eh.

I think that one of the biggest problem of Wikipedia is the copyright, but the thing you talking about is different.
Because it is an encyclopedia, Wikipedia information should be reliable, neutral, and comprehensive like every other encyclopedia. On the other hand, Wikipedia is also a form of democracy that enable and encourage people to contribute. Freedom brings good things, but occasionally take advantage of it for the worse.

I notice a deleted page every now and again. I could understand if something was spam/self promotion it should be deleted, but legit info shouldn't be tossed away.