I don't know, you take a couple of days off work to become homeless, and people start closing newspapers behind your back. My commute home will shortly face one less obstruction when I'm walking down York Way.

It was only at the end of May that doomed free newspaper thelondonpaper was advertising their free website for London - thelondonpaper.com - with a big wrap-around spread that reproduced the newly re-designed site in print. Free seems to have very much gone out of fashion at News International. 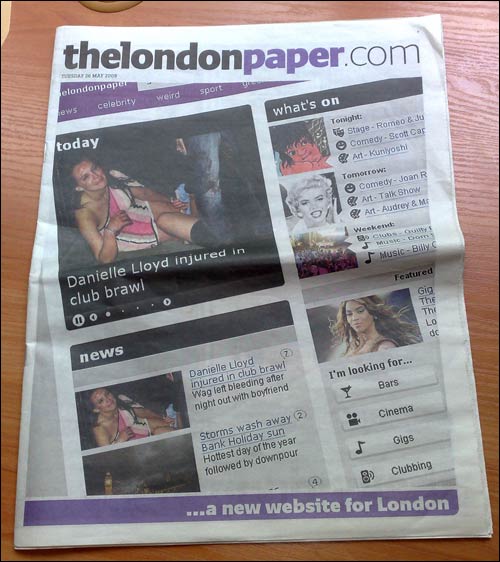 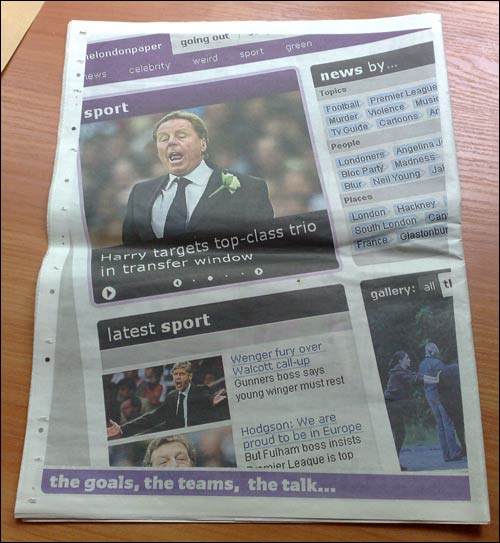 In a comment on a story about the paper's closure on The Guardian site, natts said:

"I've been a freelance web developer at thelondonpaper.com for the past two years. After fighting through a huge amount of red tape, we were finally able to relaunch the badly failing launch website in April this year and have doubled our traffic within four months. Just today we announced our private API (following in the steps of The Guardian's Open Platform), so the news came as a great shock to us."

Back in April, when the new design was launched, I filmed myself trying it out for the first time, for part of a series of video website reviews that I never got around to finishing. With the imminent demise of the paper, and the site, I've dug out the footage.

Interesting video. I find it useful seeing how other "experts" review websites but the main source of these for my sector - educheckup.com - has a habit of coming across as ever so slightly patronising! Yours is done really well so it would be great if you managed to publish others :-)

Tinkering with Anorak still - thought the London paper peaked when it released the name of Baby P's mum in the tag cloud before legally right to do so... The perils of scheduling a post...

I'm surprised that Chicago's Mayor hasn't closed down our news papers. He's the finest mayor money can buy. If you can afford the bribes, it's yours in Chicago

Thanks for posting this again Martin - didn't see it at the time.

Most of the problems/quirks you found with the site just after launch were present simply because of the rushed site build - we had originally planned to do it in 3 months, but due to delays in getting contracts signed with our various technology partners, and the print editor insisting that the relaunch could not be postponed at all, that period got reduced to just 5 weeks, hence a handful of pages that didn't get built and various corner-cutting like the Google search. The view though was that it would be better to just get something new going to replace the awful 'FatWire' CMS site we had before that, as whatever we did couldn't really be much worse than that.

With the paper closing down in 15 days now, we're now getting ready to convert the site from being a dynamically generated one (albeit running behind a CDN) into a static archive of content that can live on indefinitely, primarily so our journalists and other staff are able to use it as a showcase as and when they're looking for new work.

BTW, I did a couple of days work for The Grauniad in March (ironically in the middle of thelondonpaper.com build period), making a PHP client library for Open Platform.