If you'd been reading the headlines about BT's fibre optic trial in Muswell Hill, you'd be forgiven for thinking that the project had been completely 'halted', or that the trial was moving to Glasgow. 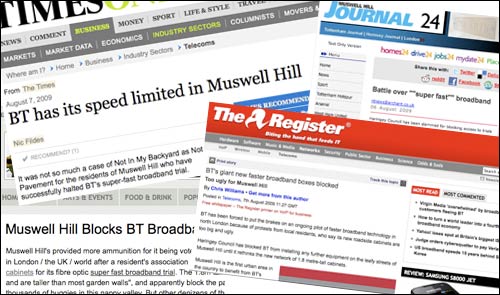 And so you'd be very surprised to see a huge amount of marketing material in the area promoting the 40Mbps trial as up and running. 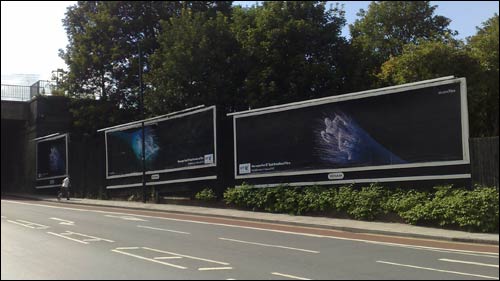 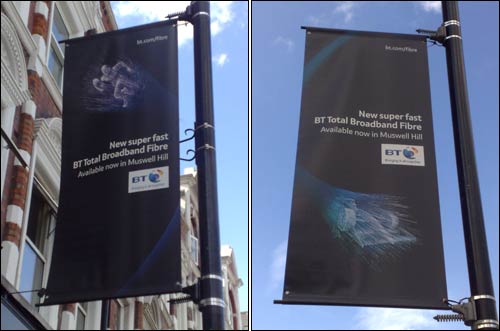 Haringey Council has intervened on behalf of some Muswell Hill residents to stop BT progressing with the installation of the equipment - increasing the reputation of the area for NIMBY-ism. The Londonist was moved to write:

"BT insist they'll be back; they may need to prepare to brave a running battle between pitchfork-and-flaming-torch wielding conservators and affronted internet nerds."

However, it doesn't mean that the whole trial has been 'halted'. BT have commenced the service in most of the area they intended - but it seems that one or two roads in the Fortis Green Conservation area are holding out.

In a piece on the Your Local London Muswell Hill blog, Vesna attempted to set the record straight, quoting John Crompton, treasurer of the Muswell Hill and Fortis Green Association. He stressed four areas of concern, including BT not seeking permission in advance of installing the new cabinets, the size of the cabinets, the location of the cabinets, and the 'cumulative effect' of having lots of cabinets. He complains about some specific locations:

I was interested to find out how intrusive these boxes were, so I went to the junction of Tetherdown to see it for myself. You can see here that the larger BT box is in the foreground, with the existing telephony equipment housed further back on the other side of the pavement. 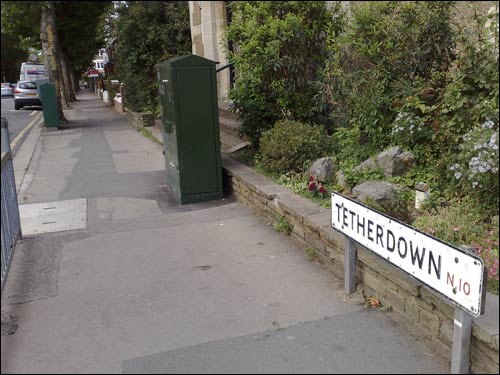 Whilst the box is undoubtedly bigger, it doesn't, in all honesty, look like it would block the pavement or cause access problems for anybody. You can judge the scale from this picture of someone having just walked past it. 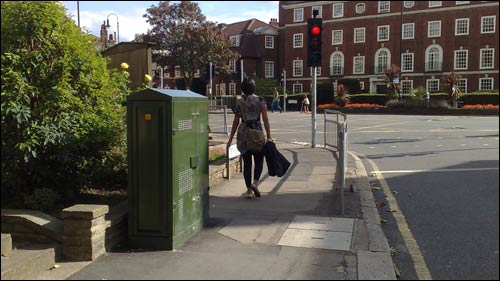 BT explain that the reason the larger boxes are necessary is because they have to be powered, to step-down the signal from the fibre-optic cable to one that can be transmitted over the copper leading to the house.

I must confess that having actually seen the boxes, I think the fuss is over the top. Whilst they are bigger than existing BT boxes, they are not particularly additionally intrusive. In terms of taking up space on the pavement, their width is about the same. The resident's association idea that perhaps they should be 'buried underground' is, frankly, laughable - having to dig up the pavement every time the equipment needed to be maintained would surely be a greater source of inconvenience.

However, where I do have some sympathy with the residents is that the impact of the trial does not seem to have been widely discussed. In the Muswell Hill Journal, John Crompton says:

"If this trial is a success does this mean every street in Britain will have these great big cabinets blocking people's paths?"

While appreciating it would push the cost up a notch or two, I wonder if BT have ever seriously considered buying/renting tiny slivers of land - specifically people's front gardens.

I am willing to bet most people would be willing to lose a negligible chunk of the wall in their front garden for a few hundred quid - although I suspect the legal paperwork might be the larger cost here.

Access from the street is preserved, and being slightly recessed away probably helps protect the box structure from knocks and bumps. Indeed, the property owners might end up keeping an protective eye on them in loco parentis.

Though these boxes are static and permanent, it's fairly clear that they have far less visual impact than parked vehicles on the street, let alone the noise impact of moving vehicles.

These cabinets do need to be sited sensitively but I can see little wrong with the design of the things themselves. Note that the "pitched roofs" of the cabinets is an "architectures of control" design element to stop people sitting or standing on them.

I think your coverage here is informative. I of course have no sympathy for any big company that seeks by what ever means to infringe on the quality of citizens lives. The boxes are such an infringement. The residents are correct to seek to block this bully taking over their space. Size does not matter here, that's not the issue. The issue is and the question you should be asking; is it ok to allow bullying of small communities by Corporate giants? Think about it.

They're not really any worse than those large ugly grey boxes you get next to every set of traffic lights (presumably out of shot in this image.) Or wheelie bins (which smell.) "Lots of cabinets" = how many? I'd presume one for every <= 500 homes?

You have admit though, they are a bit of an imposition on the street. Surely there can be some kind of alternative solution? The idea of burying them beneath the street (with access via some sort of manhole cover) might be feasible?

Alternatively, give up on the idea of providing wired fibreglass access altogether, and instead hide wi-fi antennas in streetlamps?

In many areas more cabinets on the pavement = more venues for graffiti and more collections of litter, especially stuck between them and any nearby wall. So I think the cabinets need to be judged not just be appearance when newly installed, but also by how they appear week in, week out over a few months

BT equipment boxes are now "an infringement ... on the quality of citizens lives" and/or "a bit of an imposition on the street" ?

But the prior existence of tens of thousands of almost exactly identical units all over the country for the last forty years was not?

So what changed? They're at most 12 inches taller, is the only difference I can see from the pics.

Some days there's really not much to not hate about people.

I have an odd sympathy here for the residents of Muswell Hill (I used to live there as well). I suspect that some of the objection is rooted not in the boxes themselves, but in the 'yet another bloody thing' aspect of this.

These boxes aren't the only new appearance on the street - everything seems to be slightly bigger, slightly more intrusive and slightly more un-asked for - this is just something that the locals can focus on.

The quality of dialogue on planning, co-design and the roll-out of new services is very poor - at least in part, because of a fear that all such debate is hi-jacked by NIMBYs and what consultation longbeards call 'the Hard To Avoids.'

The answer is for a combination of BT (in this case) and the local authority to be more active in finding *representative* cross-sections of citizens and being more active in local area design.

For all the talk of democratic renewal, so much of the focus seems to be on constitutional questions, and so little is focused upon the real challenge: How do we involve more people in day-to-day micro-level decisions.

I suspect that - if we did - someone would have come up with Ian's 'front garden' idea which seems a very good one to me.

You'd have to hope that they've learned from the experience of AT&T in the US though and that they don't start exploding!

As for an alternative, putting them up in the air is one but could they not also be buried below the street or in the pavement like some of those popup urinals you see in city centres?

A point that seems to have been overlooked is that the cabinets will need to be opened in all weathers.
If the FTTC cabinet is to be opened in bad weather a tent must be installed with room to open the cabinet doors as the electronics equipment must be kept dry. In your picture, if BT need to open the road pit covers at the same time you will have a total path blockage.

I've been waiting to be added to the fibre trial for nearly five months - you have no idea how much music-on-hold I have listened to. Today I finally discover that I am not eligible after all. I have grumpily blogged about it here.

I live in Muswell Hill and use a lot of bandwidth. I absolutely cannot wait for the trial in my area to start.

I have one of said street cabinets on my street. It is neither ugly nor obtrusive. It's just a green box and I hardly notice it (my dog even likes to pee on it...).

I wish a small group of people was not able to block such a great project. Britain is faaaar behind continental Europe when it comes to FTTC and the sooner VDSL is rolled out the better. I suspect that the "silent majority" couldn't care less about these cabinets and are really just annoyed by the delay.

If anyone knows how I can register my support for the project please post details.

I have no sympathy with these Troglodytes. I live in North Wales and I am lucky if I get 485KB (less than 1/2 a meg) and would dearly love one of these green boxes in my front garden. If they don't want to increase their speed from 8MB to 40MB then please ask BT to spend the money in rural areas and get us up to the 2MB we have been promised.