Every time I heard the Zager & Evans 'classic' "In The Year 2525" as a kid, I instantly imagined myself transported into the glorious future of jet-packs and hover-cars that I was so cruelly promised, and then, as an adult, denied.

Listening it to it again the other day, I began to wonder if we could yet assess how accurate Zager & Evans' predictions of the future were... 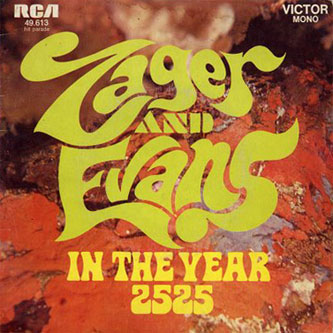 In the year 3535,
Ain't gonna need to tell the truth, tell no lies,
Everything you think, do, or say,
Is in the pill you took today"

Well, for a start the song begins with a bit of a cop-out. Although it is called 'In The Year 2525', there isn't actually a description of what will be going on then. The first assertion, of mood-controlling drugs of the future, is actually set 1010 years later, in the year 3535.

"In the year 4545,
Ain't gonna need your teeth, won't need your eyes,
You won't find a thing to do,
Nobody's gonna look at you"

It is quite difficult to interpret this as a prediction. To be honest, if you wander around London not dressed as anything special you can get the impression that nobody ever looks at you already. The fact that you don't need teeth or eyes in 4545 could be quite exciting though - it might mean that all you are going to be eating is mushy space food delivered in tubes, and that everybody lives in a sophisticated virtual hyper-reality.

Or it could just mean that everybody has gone blind like in 'Day Of The Triffids', which would be somewhat less cool. 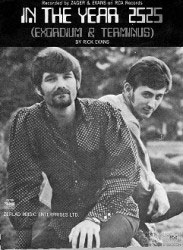 "In the year 5555,
Your arms are hanging limp at your sides,
Your legs not nothing to do,
Some machine is doing that for you"

Now, I've seen some vague functional specifications in my time - but 'some machine is doing that for you' tops the lot. This 'some machine' is going to replace all our physical functions based on a sloppy spec like that, eh?

"In the year 6565,
Ain't gonna need no husband, won't need no wife,
You'll pick your son, pick your daughter too,
From the bottom of a long black tube"

Hang on a second here chaps. You just told me that by 4545 I'm going to have no teeth or eyes, and that by 5555 I'll have no arms or legs. So how the hell am I supposed to be picking this offspring from the 'long black tube' eh? Telekinesis? Or is the 'some machine' going to do that for me? 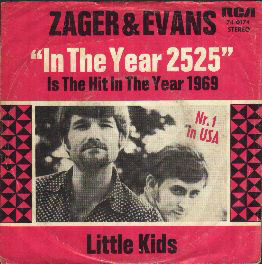 "In the year 7510,
If God's a-comin' he ought to make it by then,
Maybe he'll look around himself and say,
Guess it's time for the Judgement Day"

Woah! It has all been a con! Zager & Evans have lured me in with their futuristic sci-fi vision of 'some machines' and genetically-enhanced children, but now they are going to turn it all around to be about God and religion, the bounders!

"In the year 8510,
God's gonna shake his mighty head,
He'll either say I'm pleased where man has been,
Or tear it down and start again"

Bah! Not only is the song turning out to be about God, but it appears to be about a very slow and indecisive God. He was already thinking it was time for Judgement Day in 7510, and it is now a thousand years later, and he still hasn't gotten around to it yet.

"In the year 9595,
I'm kinda wondering if man's gonna be alive,
He's taken everything this old earth can give,
And he ain't put back nothing"

So, let's recap. In 7510 God was thinking about the Judgement Day. By 8510 he was just about getting around to shaking his mighty hand. And 9595? Zager & Evans don't actually make it clear whether God was happy or not, and instead come out with some fashionable hippie eco-claptrap.

Still, I'm on tenterhooks - what can possibly happen next in this amazing future?

"Now it's been 10,000 years,
Man has cried a billion tears,
For what he never knew,
Now man's reign is through,
But through the eternal night,
The twinkling of starlight,
So very far away,
Maybe it's only yesterday...

Noooooooooooo! It's like a Russell T. Davies episode of Doctor Who that resets itself at the end thanks to a paradox machine or a passing truck! It has all been a dream! We're straight back to 2525...

Incidentally, 'a billion tears' seems a terribly conservative estimate of how much man might cry in 10,000 years. Assuming they were using the American definition of a billion - that works out at just 100,000 tears per annum. For today's Earth population of 6+ billion, that means a quota of just a fraction of a tear per person per year...

One thing is for sure though - it seems their record company, RCA, didn't predict the 8-track stereo cassette cartridge going out of fashion. 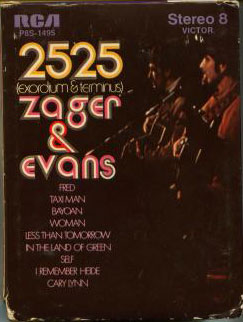 The band have the dubious distinction of being the only act in the UK to have had a #1 hit and then have none of their other records ever enter the Top 40. As a consequence, rather than being a rock star, Denny Zager makes custom guitars nowadays.

One final thing that wasn't predicted in the song - by 2008 you'd be able to watch a clip of it over the Internet thanks to YouTube.

if think it's about technology as a means to an end
about material development without spiritual development. no responsibility and morality.

not having the purpose god wanted ' having exhausted the worst roads. finding tears and after that not ever remembering. everything for vain.
man rule destroyed itself.
god grace is hope that either there is a new creation and repeating everything or the song is a vision prophecy of what might be and god's grace giving warning so man can change. (and again either "in the year 2525.." man do the same or please god).

do you know the sci fi story "That Hideous Strength" by C.S. Lewis ?

Whatever anyone says about the song 'In The Year 2525', it is a great song none the less.