England started their attempt to qualify for the 2010 South Africa World Cup at the weekend, with an away game against Andorra. Tonight, they face what is expected to be by far their toughest test in the Group 6, an away match in Zagreb, Croatia. Although I can't say I fancy the Ukraine, Belarus or Kazakhstan away matches much either.

During the course of the qualifiers, I'm going to be reviewing the websites of the FAs opposing England. However, today I'm going to make an exception. I only recently reviewed the Croatian website during Euro2008, so I thought instead I would take the opportunity to look at the English FA's site - thefa.com 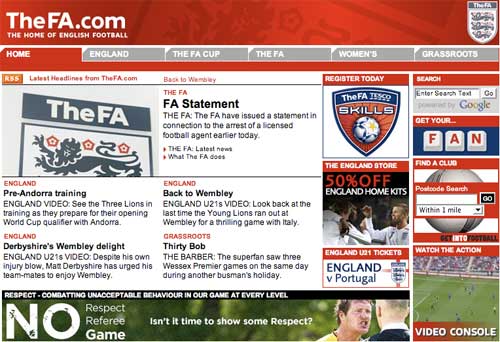 The homepage of the FA website includes news and features about the senior England team and the workings (mostly disciplinary) of the FA itself. There are panels featuring football news feeds from the BBC and the PA.

This is just as well, as some of the FA's own news features were not exactly awe-inspiring on the interest front.

"With one new face in the camp in Fulham midfielder Jimmy Bullard, the squad were led out on to the training pitch by Fabio Capello before going through their warm-up and making slight use of the ball. A few stretches followed before more ball work was done, all under the watchful eye of the manager. "

Credit to the FA though on the accessibility stakes - the page is equipped with 'read aloud' technology.

That is, of course, all after you manage to get to the homepage and the rest of the content. When you fire up thefa.com there is usually a splash screen in the way. At the time of this review, it was for England's U21 game against Portugal at Wembley. 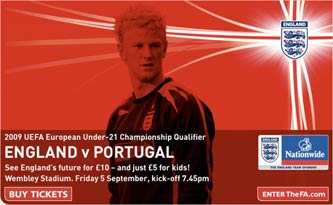 A lot of the FA news and feature content is supplied as video. It is delivered in the Windows Media Format using a pop-up console. Judging by the copyright notice, it seems the site has offered this facility since 2005. 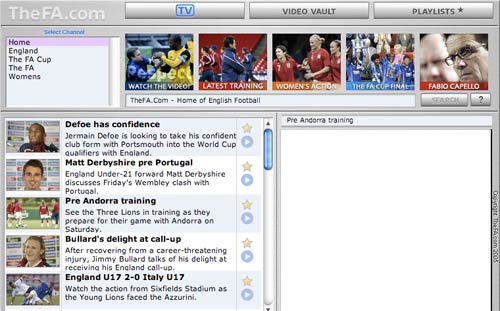 The English FA site has a couple of interactive and Web 2.0-ish features, including RSS news feeds and votes. These feeds cover both the main headlines, and a feed specifically for news about the FA Cup.

There are no social bookmarking or link sharing features on the site.

Not all of the content is being kept fresh on the site however. Under the main left-hand navigation for the senior team there is an invitation for users to vote for their favourite ever England goal.

The catch is that, according to the website, the winner is due to be announced in the programme for the England vs Croatia Euro2008 qualifier in November 2007, and we all know how that night ended. 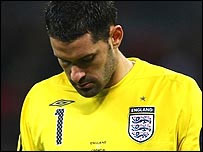 The FA website is not only still urging users to beat the October 31st 2007 deadline, but you can still open the pop-up window and appear to be able to cast a vote. 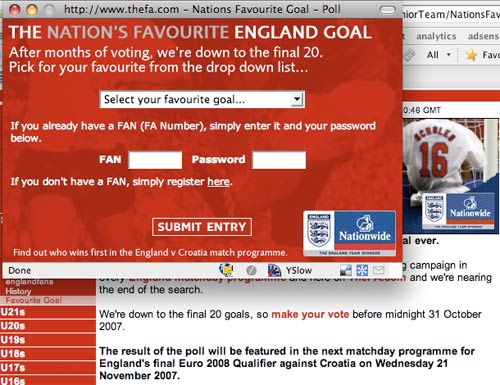 I looked after a few football related votes in my time at the BBC, but at least I made sure that when they were shut, they stayed shut. Even if the end result was a bit boring.

The FA site isn't just about the English national team. The FA also run what is either 'the greatest club cup competition in the world' or a meaningless bauble that doesn't carry Champions League qualification, depending on whether you are in the FA PR department or at a tabloid. The site has a whole section devoted to what is still known in England simply as 'the cup'. 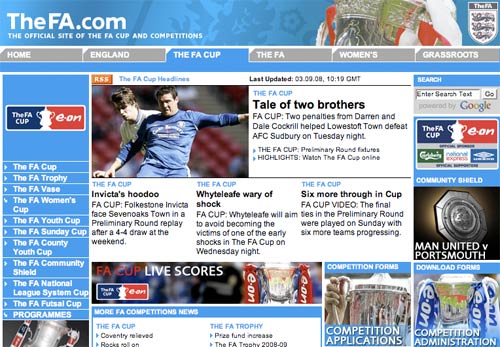 There is video content here from the early rounds of the competition, and I must say I think this is one of the better sections of the site. There is, clearly, news media overkill on the England team and Premiership, so it is nice to see some in depth coverage of the travails as teams like Lowestoft Town and AFC Sudbury bid to reach the early 'proper' stages of the FA Cup.

There is a slot for a vote on the page, but unlike the moribund 'favourite goals' vote, when there isn't something current, it defaults to a message to that effect.

The English FA website uses a Google Syndicated Search engine to provide a site search. It is interesting to note that it is quite clearly set to 'Safe search'. Also, although the FA have the results appearing on an FA branded page as an iFrame, they haven't customised the display of the Google results to fit in with the FA site branding or colour scheme. 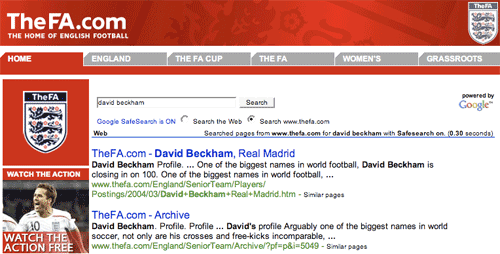 In October, England's hunt for World Cup qualification continues with matches against Kazakhstan at Wembley, and Belarus in Minsk, and I'll be carrying on this series with reviews of the Kazakh and Belarus FA websites.

IMHO the welsh fa (www.faw.org.uk my home nation and not homepage) is pretty poor.