Earlier this year I wrote a post about ways of promoting the use of comments on your blog and getting better exposure for the comments people leave. That post is now a total honeypot for comment spam, thanks to the way it ranks on Google for the phrase 'Please waste my time and fill my blog with dull and unimaginative fake comments signed by an SEO or real estate company' or some combination of words which seem to have that effect.

Nevertheless, the ideas in the post stand, and one of them was to do a periodical review of comments on your blog that had piqued your interest, required some sort of follow up, or were an up-to-date point that didn't deserve to be left languishing unread in the blog archives. So here is my second monthly round-up of that sort of thing - you can find August's here.

Is the sun still burning?

I had a comment on my round-up of newspaper Facebook applications from Xerol Oplan, the genius behind the 'Is the sun burning?' application.

This was clearly a pre-cursor to the 'Has the Large Hadron Collider destroyed the earth' website, but Xerol reckons I was under-estimating the number of users by some magnitude. My article was based on the 'active user' count available to the public on Facebook, but this was not a true reflection of the install base, which Xerol says at one point was up to 5,000.

I should note that earlier in the year Ilana Fox of The Sun (the newspaper, not the heavenly body) posted to make the same point - so apologies are due all round.

"Dude. You could simply get into a routine whereby once a day at a specific time you can simply refresh your user profile page or do a quick login/log out. Et voila, no problems at all with keeping your login active and current. I do this automatically to keep track of my user score just so I can make sure it's above an arbitrary number I've decided upon."

It sounds like quite a worthwhile aide-mémoire. I keep a big button for UK Nova on my bookmarks toolbar in Firefox, right next to the log-in for my currybetdotnet Movable Type account, and still I forget to click it, so maybe I'll try her idea.

For the record, I should add that personally I'm very excited about the Olympic and Paralympic Games being held in my home town, and hope to attend. However, I'm not convinced that the level of cost isn't inflated by too much unnecessary political glad-handing and public sector inefficiency, and I'm keen myself to keep an eye on both the positive and negative aspects of preparations for the Games. 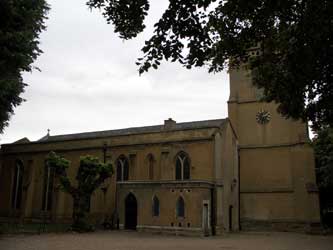 My Haunted Walthamstow & Chingford post continues to attract comments of various degrees of seriousness. The latest is from Hamza Khan, writing about High Beach. He re-tells the local tale that near an area where public hangings took place:

"if you drive half way up the hill, stop the car and turn it off, handbrake up and place your foot firmly on the footbrake, your car will continue to glide up the hill, with no sound of the tires."

He also states that:

"High beach is just off the A road that leads to Loughton. Make sure you are armed if and when you go there."

which suggests that even London's ghosts aren't safe from the teenage knife and guns menace afflicting the capital...

After my reviews of the Andorran and English FA websites as part of my 2010 World Cup qualifying series, Uncle Wilco posted to ask how I thought the other 'Home Nation' websites compared. For his part, he reckoned that the Wales site was pretty poor.

I've been looking at the international calendar between now and the World Cup to try and work out what I could fit in apart from the teams in England's group, particularly on the dates when England don't have competitive fixtures. Reviews of the Scottish, Welsh and Northern Irish websites could yet be a possibility on currybetdotnet.

Or I could just wait until 2011 and they stage the Four Associations Tournament in Dublin.

Incidentally, Uncle Wilco appears to be involved with a blog about sheds, which I initially thought was a more niche activity than writing about newspaper websites, but on reflection, I bet he's got more readers than me. I wonder if notorious garden shed man XTC's Colin Moulding subscribes?

Last month I wrote about finally getting hold of a download of Slab!'s "Music From The Iron Lung" mini-LP. Steven Dray, the band's vocalist left a comment on the post to let me know that they now have an official website at slab-uk.co.uk, and a MySpace presence at myspace.com/ukslab. He also pointed out a very lengthy thread on the Unfit For Print blog with lots of discussion about the history of the band. Paul Jarvis, one of original guitarists with Slab! also got in touch, and the band are apparently working together for the first time in the best part of two decades. The new official site claims they will be making available for download some early demo and rehearsal cassettes in the near(-ish) future. So maybe I'll end up with a copy of "Mining Town In LotusLand" after all.

In the meantime, here's the video for "People Pie", courtesy of YouTube, Ikon and the official Slab! site.

There used to be a tool on the internet that could open a uk nova account for your automatically, to save spending hours trying to get access as it was permanently full. Not sure if this still exists?? I like your idea of having it on your bookmarks toolbar - great if you've got roboform too for making the process incredibly quick.