When does it stop 'being' Kraftwerk?

The other day I bookmarked a story about the recent tour of the USA that Kraftwerk have just done, which culminated in their appearance at the Coachella festival. The set-list has changed slightly from when they were on their post 'Tour De France Soundtracks' world tour, but the biggest difference has been the absence of founding member Florian Schneider. 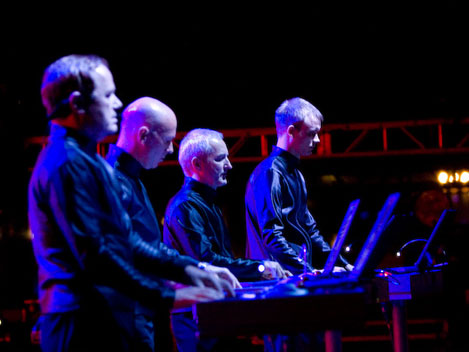 There is no official word as to why he isn't on the tour. He might be ill, he might have left the band, he might have just filled in his complicated US immigration landing card wrong - who knows?

This isn't the first time Kraftwerk have played live with temporary members. In the early 1990s Portugal's Fernando Abrantes appeared live with the band for a few months, although on the five times I've seen them live since 1991 the line-up has always been Ralf Hütter, Florian Schneider, Fritz Hilpert and Henning Schmitz. 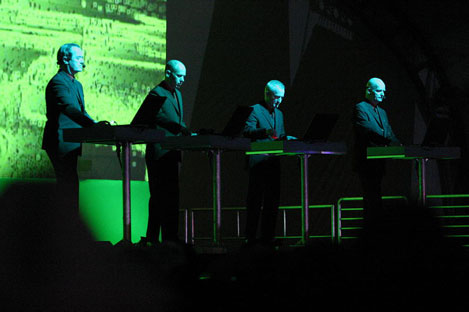 That in itself isn't the 'classic' quartet. During the late seventies and eighties when the band were at their most productive, Ralf and Florian were augmented by Wolgang Flür and Karl Bartos. 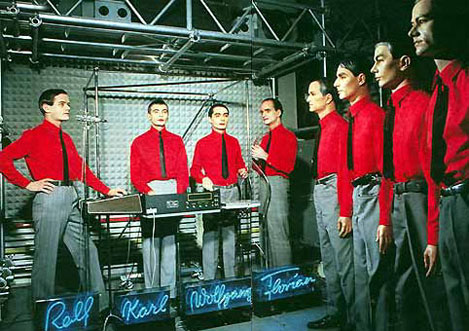 However, Florian not appearing is different - after all their second album is even called 'Ralf und Florian'. It did make me question at what point it wouldn't be Kraftwerk anymore. 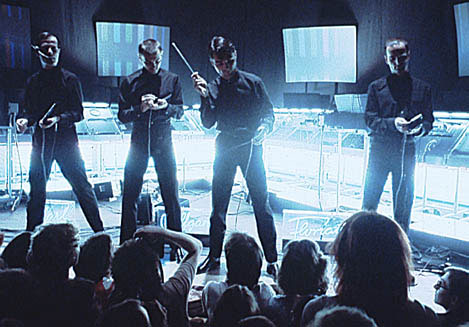 If Florian never appeared live on stage again, but Ralf Hütter was present, that is still Kraftwerk - albeit without a founding member. But what if Ralf wasn't there either?

I happily accept that when they play 'The Robots' as an encore, with nothing on stage except 4 laptops and 4 mechanical robots, that I am watching Kraftwerk. 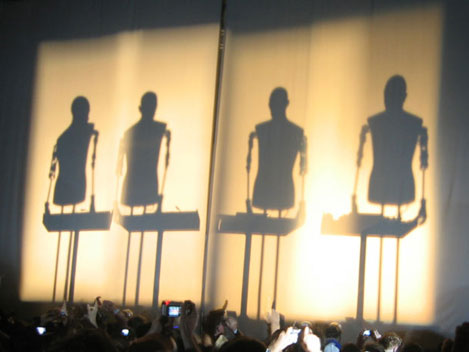 People pay good money to see 'Elvis' on video accompanied by a live band. If Kraftwerk consisted of any four people standing at laptops, playing Kraftwerk songs, would it still be Kraftwerk? Would it still be Kraftwerk if it was Fritz and Henning plus two others, playing the songs written by Hutter-Schneider-Schultz. Becuase, when you think about it, many of the 'classic' era songs were co-written with Emil Schult, and despite designing their iconic sleeves and writing the lyrics, he hasn't played with the band since 1973. 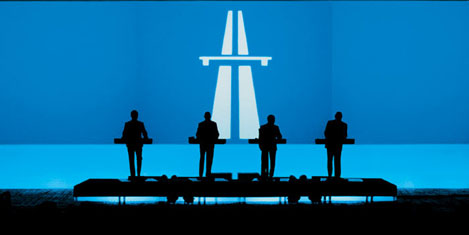 So, when does it stop 'being' Kraftwerk?

Mark Steel used a similar question - "can I really say I've seen the Four Tops" - in his programme on Aristotle.

If both Ralf and Florian are in the band, then it is Kraftwerk. If either is not, then it isn't.

Of course, Florian is still in the band; he has just retired from touring. The touring band should be renamed 'Kraftwerk Live', which would be the officially recognised (by Kraftwerk) live representation of Kraftwerk.

If both Florian and Ralf are present in Kraftwerk Live, then it is Kraftwerk - Live.

There is one plus - more concerts (Florian always did not like it).

As for any official announcement, don't hold your breath.

I like the idea of "Kraftwerk Live" and Kraftwerk - Live.

This is a very intriguing question you pose here. I'd go to a Kraftwerk concert even if the lineup didn't include Florian and I'd definitely be interested in a concert where Kraftwerk music would be performed by other musicians, if their interpretation was interesting and unique.

Today, it has been announced that Florian was leaving the band. Sad but true.

There is a troup of mimes/clowns named "tricicle" that start to be quite old, so they created a new troup "tricicle2" who play their old spectacles all around the world while thay are creating and showing their new ones. I find that quite clever and funny.

Oh, and I remember an old ITW of krafwerk at the time of the "the mix" tour in 1991 where they said that they were working on machines that could go on playing and creating "krafwerk" music even when all K members are dead.

I went to see Kraftwerk in Krakov Sept 2008.
Florian didnt play then, nor on their next tour in Australia, which had cancellations due to another band member having a heartache.
Florian will no longer be touring with Kraftwerk and apparently , this may not be true but ive heard that Ralf and him have had another big argument over cycling again which makes him not want to be in the presence of Ralf.
The line up for their tour in 2009 doesn't include Florian.
Hope this is some help.

The spooky thing is that since they are so de-personalized, it´s like the IDEA of kraftwerk performing. And there´s a rumour that Kling Klang is fitted with a sort of AI-program, making it able to in the future "auto-generate" kraftwerkian songs.

I think when the concept transcends the creator then the creator's presence no longer matters. In popular music this rarely happens, but as Kraftwerk always presented themselves in a depersonalised way this transition may have been made easier.
It may be an interesting exercise to identify other artists whose actual physical presence no longer matters provide there is some sort of visual experience to turn the music into a "show".

I think the Rolling Stones are prime candidates for robotisation, preferably this will happen before theband are are rolled out in wheelchairs and IV drips and *all* the music is actually played by hidden session musicians behind the stacked amps and speakers.