I recently gave a presentation at the Miami IA Summit about Information Architecture and user-centred design ideas for widgets, and I very often blog about newspaper websites on currybetdotnet, so it seemed like an obviously great idea to put the two together, and blog about newspaper widgets.

Well, obvious maybe, but it turned out not to be such a great idea after all. Rather than ending up with a lengthy series of posts looking at all the available widgets and gadgets for a range of newspaper, I was surprised to find how little was out there. And slightly depressed to find that the widgets and applications that are out there from the British press seem to have a very low take-up rate.

Over the next few days I'll be looking at three platforms - Yahoo! Widgets, Google Gadgets and Facebook Applications - and seeing which newspapers are providing their content in this format.

Yahoo! Widgets are based on the Konfabulator engine that the company purchased in 2005. Once a user has downloaded the widget engine to their computer, they can then download individual widgets that sit on the desktop, refreshing with information from the web. The widgets are written in XML/HTML and JavaScript, and support an increasing range of functionality as Yahoo! updates the platform. The Yahoo! Widget gallery offers over 4,500 widgets for download - some made officially by companies, and some made by enthusiasts.

Despite the wide range of widgets available from Yahoo!, from useful functions for your computer, to something idiosyncratic like a Napoleon Dynamite widget that just spouts quotes from the film, I saw only one widget using the content of a British newspaper.

The Independent has an RSS reader widget, which gives the latest headlines from the paper. It seems official, and was developed by Todd Lininger. 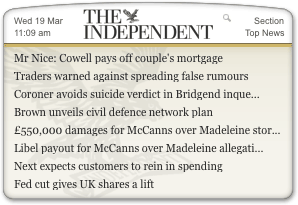 The widget is clearly modeled on a similar product he developed for the New York Times, also available from the Yahoo! Widget gallery.

This effort from The Independent seemed to be the only official or non-official newspaper based widget on the site.

In the next part of this series I'll be looking at which British newspapers have made official Google Gadgets.

nice one about china and chania - what are you doing in hania (from what i saw of your blogger profile, this is where you live)

When I'm not working in London, I live in Chania.

Martin - I need some direction as to how I should approach creating a new widget.
I would like to create a widget to help syndicate my news content to other websites, and need some pointers to get started. Do you have any advice as to what type of widget/gadget you recommend and why.
Also, where can I find the follow up to this article - part 2 and 3??
Thanks for your help!