Yesterday I was looking at how I got a job in the mail order department at Reckless Records during the early nineties, and how the working month revolved around the sending out of the mail shot.

The other big deadline each month was getting the copy finalised for the two, three and sometimes four page advert that Reckless Records used to take out in the Record Collector magazine. 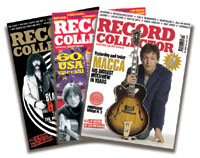 Although several other publications tried to move into the same market, Record Collector was the definitive monthly magazine for both vinyl enthusiasts, and for the people trying to sell vinyl to the aforementioned enthusiasts.

If you've got an interest in music and music marketing, and have never read a copy, then you should grab one and have a look. Each month the magazine features in-depth articles and discographies of a range or artists from the fifties to (in my day) the nineties. There are a huge number of bands and artists that I know a wealth of information about because they were featured in Record Collector during my tenure at Reckless.

They often used freelance writers who were real specialists on one band or artist through being chairperson of the fan club or an ex-manager or something like that. I used to hope that one day I would get to write the definitive Record Collector article about one of my more obscure favourites, like Slab! or Globo or Tot or The Wolfgang Press or Clan of Xymox, but sadly that call never came.

And it is funny how you always seem to remember crushing blows to your ego many years later.

Every month my boss used to go to the offices of the Record Collector magazine to personally deliver the floppy disk with the PageMaker files for our lucrative advert.

One month he was unavoidably on holiday on the due date for the copy, and so instead I was entrusted with the task of shutting the downstairs mail order department for the afternoon, and physically travelling to West London to deliver the precious binary file.

My visit was unlike everything I had heard about his visits to the publishing house.

He got offered drinks, and invited in to chat to the editor, and to check the layout of the material and generally chew-the-fat with the Record Collector crew, who I was very excited to be finally meeting. And hoping to pitch my obscure articles to.

So, with trepidation, I announced myself at the reception desk...

...and the receptionist simply took the envelope with the computer disks from me and said "Thanks"!

As well as being the definitive magazine for record collectors around the world, the publishers of Record Collector had a huge say in how much things sold for secondhand. Every two years they published the Record Collector Rare Record Price Guide.

This was the bible of second-hand record shops.

It told you, if you should suddenly encounter the rare cover variations of David Bowie's 'Man Who Sold The World' album, exactly what should be there in terms of inner sleeves, and inserts, and how much you could expect to sell it for second-hand.

It was only a rough guide though, and once you really got to know your customer base, it became apparent that if you had original vinyl albums in mint or unplayed condition, you could sell even the most mediocre of seventies albums to people mail order for £8-£10.

Sixties stuff was much rarer, and much, much harder to find in the kind of condition that was good enough for re-sale. Especially via post, where people couldn't get to assess the condition of the vinyl themselves before purchase, and so you had to be more careful about the kind of state the record was in.

We used to get our stuff from all sorts of places. We bought a huge quantity of rare sixties acetates from the son of a legendary 1960s record producer who had fallen on hard times, we acquired massive collections belonging to journalists and radio producers, and I once bought a very complete set of material from the 4AD label only to realise at the end of the transaction that the guy was one of the in-house engineers who had worked on most of the records I'd just brought.

Although we had an almost encyclopedic knowledge of the prices of the second-hand market between us in the mail order department, you would occasionally make mistakes and drastically under-price something.

You couldn't feel too bad about it - after all we were making a healthy margin on most items.

However, if an under-priced item got into print in either the mail shot or the Record Collector advert, then the phone would be jumping off the hook for weeks, all with people asking about the same thing that we had under-sold ages ago.

I especially remember getting in some pristine copies of a couple of early EPs on the Tamla Motown label.

We priced them at a little over their 'book' price, at £60 and £70 or so each, and they flew off the shelves within minutes. By then, however, they had already been sent to press as the star items in the text of our next Record Collector advert, and we spent much of the following month simply answering the phone:

In the next part of this series I'll be writing about what it was like to work on Upper Street in Islington, the source of Nick Hornby's inspiration for 'High Fidelity'.