I'm a bit of a sucker for being a cult fanboy to be honest. Regular readers wil have noted this blog has a 'Doctor Who' category, and I'm also guilty of being into other fringe interests like Greg The Bunny, Buffy and Angel, The Magnetic Fields, David Sylvian, the latter years of Talk Talk, and so on.

One cult that I adopted by osmosis was that of Tintin. I'm not a huge fan of graphic novels, but I have a really great friend who has an unhealthy Tintin obsession, and I've come to share it. To the extent of even sitting with her and watching the 1961 French live action movie Tintin and the Golden Fleece in French without subtitles, and between us trying to figure out what the hell is going on. 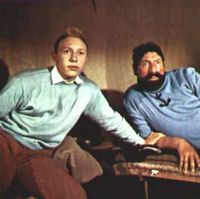 So I've been watching the row about the CRE and 'Tintin In The Congo' develop in the UK with interest. Pete Ashton has a good overview of the furore here, and I've particularly been interested in the comments about the issue appearing on newspaper websites.

"I find it absolutely absurd that a book that was written a long time ago (80 years, I think) should be at risk of being banned in these days of rap artists talking about drug use, guns,and referring to women as 'bitches' - are these things okay to be said to a wider audience than the Tintin books receive?" - Craig huxley, Thessaloniki, Greece on The Times

"Get real. Are these idiots paid to point out things and take them totally out of context?! Are we running out of career options in this country? It's this sort of behaviour that causes racism in the first place. She has basically said that black people are monkeys and imbeciles when the book probably doesn't even imply this at all. If that's the way she sees it then she is the real racist not the author of Tintin or the people who buy it. It has been severly taken out of context." - Cheryl, Shropshire on The Daily Mail

"Can a White person be involved in anything in todays day and age without being accused of any type of racism or prejudice?" - Phil, Norfolk, VA, USA on The Times

"Some people just aren't happy unless they have something to moan about. If black people are offended they don't have to read these books, surely?" - Pat Sweeney, Lanark on The Daily Mail

It seems to me that most of the people commenting are doing so through the rose-tinted spectacles of having read Hergé's later racism-free works. The loving and detailed depictions of Tibet and South America, or the detailed creation of Syldavia, could only be done by someone who understood cultural differences, and the way they make the world a brighter more vibrant place.

However, 'Tintin in the Congo' is not one of those books. 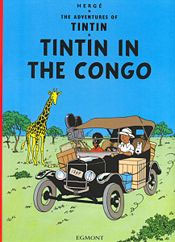 I've always been ambivalent to the accusations that Hergé was anti-Semitic.

1942's 'The Shooting Star' is generally cited as the evidence for this brand of racism. Produced during the occupation of Belgium by the Nazis, it is under suspicion because the multi-national scientific team investigating the mysterious meteor is composed entirely of representatives from neutral and Axis countries, and because the enemy looks to be a caricature of an American Jew.

But then I have always felt that since Tintin's nemesis was called Rastapopoulos, that they had has much claim to be offended in Athens as in Tel Aviv.

And, when people talk about racism in the works of Hergé, they should also remember that during the 1940s and 1950s, it was the American publisher of the books that insisted that black characters be whited out, as they didn't think it was appropriate to show black and white navy sailors working together in a book for children.

However, even as a fan, I have to say that 'Tintin in the Congo' is, without a shadow of a doubt, racist.

It is a product of its time, for sure, but the portrayal of the native Africans is a crude colonial stereotype. This is typical of the first couple of adventures in the series. 'Tintin in the Land of The Soviets' is Boy's Own style anti-Bolshevik propaganda from the 1930s, and 'Tintin in America' is a string of adventures evoking every known stereotype about old fashioned Wild West frontier folk and their In'jun enemies.

That doesn't mean that I agree with the CRE that the book should be 'banned', but I would agree that the facsimile editions of the earliest Tintin adventures shouldn't be racked alongside The Castafiore Emerald or King Ottaker's Sceptre.

The funniest thing for me though, is seeing that the book, unloved by Tintin fans or Hergé himself, is now in the top ten of the Amazon best sellers list in the UK. I'm fairly sure that these new found Tintin aficionadoes are going to be disappointed with their purchase - the plot is simplistic to say the least, and the fact that it was originally written in 4 panel strip format really shows when you read it in the long-form version.

And, more importantly, what are these doyens of the freedom to be offensive going to say when they realise that apart from being beastly to the natives, in another throwback to the colonial years of the early 20th century, in the original version of the book Tintin blows up an endangered Rhino by drilling dynamite into its' hide? 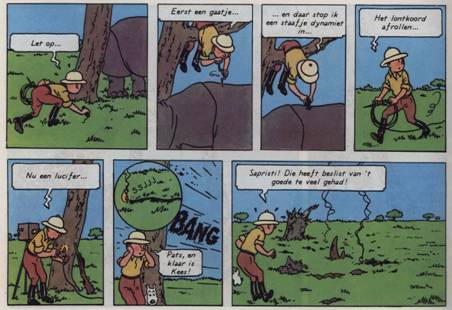 I'd call this early Herge story more naive than racist.