Since the announcement that the BBC's iPlayer would contain elements of Microsoft's DRM, and that any forthcoming versions for the Apple or Linux OS would also need to incoporate some type of DRM, a debate has been raging on the backstage.bbc.co.uk mailing list.

There are those who understand that in order to facilitate any kind of on demand service, the BBC needs to protect the interests of the rights-owners involved in making programmes. These creative people expect to be able to make a living from their work, and want the opportunity to make money from DVD sales, repeat transmissions and overseas broadcasts. Whilst no DRM solution will remain un-hacked, the BBC has a duty to protect the secondary (or is that now tertiary?) rights of these people, and DRM provides a level of protection that is deemed acceptable by the industry. At the moment, with no DRM in place, there would be no on demand content to download.

And then on the other side of the debate are a few people who seem to believe that they are entitled to download other people's creative work for free, in perpetuity. This appears to be on the basis that since they once uploaded something to Sourcefourge, and they are prepared to work on software for nothing in their spare time, then why shouldn't the people who write scripts, supply background music, or appear in television programmes give their work away as well? And, as I understand it, the main thrust of their argument additionally appears to be that Linux pwns Micro$oft. 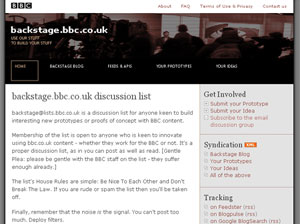 I joined in the debate last week by reporting a conversation I'd had with my wife about DRM-restricted content.

"On a related DRM tip, I just thought I'd chip in with some comments my wife made last night. We download podcasts from the BBC, and from Virgin Radio (thanks Mr Cridland!), but obviously it is all talk related, not full track music content.

My wife asked me "Are there any podcasts from XFM or something like that, where they just play you the new cool tunes?"

and then she said the immortal words that no anti-DRM zealot ever wants to hear...

So there you go, you have to keep in mind that the people on this list are not representative of the public in general, whether it is about clicking web adverts, or avoiding DRM like the plague.

As a consumer my wife is savvy enough to understand the concept of DRM - and she just doesn't *care* that it restricts her use and re-use of downloaded material. She's just interested in downloading time-shifed radio programmes with full music tracks in it, and being able to listen to it once."

Perhaps I could have been clearer that my wife meant that on this type of podcast product she wouldn't care about the DRM, rather than that being her view on DRM in general. However, I was taken aback by the ferocity of some of the responses my email generated.

"Well then, I perceive this as there being a difference between the way you and she consume your music. Certainly, it's not how I want to consume my music - I want it to be more than muzak, I want my music to be memorable, to associate it with good times, to have a long-lasting impression on me. DRMed content doesn't really lend itself to 'anytime, anywhere, anyhow' playback now on any device I can get my hands on, does it?

If she wants to treat her downloaded music in the same way she'd treat her local Gcap network radio station (on in the background at work, churning out playlisted top 40 tracks all day long) then that's a fair application for DRM, because the content loses its appeal and stales rapidly. Not so for 'music' music, music people want to keep over a long period of time."

"Separating fools from their freedom is wrong. The fact that the fools participate voluntarily does not excuse it."

Now, I may not be best placed to judge how foolish my wife can be, after all, she did marry me, but as she has worked in CD stores for years, gone to hundreds of gigs and countless festivals with me, and was the driving force behind our decision to go to a gig in every country we visited last year, I can assure you she isn't a muzak fan.

I put some of the points made to my wife, and she was naturally infuriated. First of all she saw it as yet another example of a situation where some men simply don't seem to be able to take seriously the idea that women can be as passionate about something like sport, computers or music.

She currently has no internet access where we are living, and so the only "new" web-enabled content that she can listen to is streaming radio when she is in an internet cafe, or any podcasts that I download. She was pretty unequivocal in her response to the replies to my original email on the list:

"It is selfish and ignorant for people to think that everyone has a broadband connection and can get everything at the click of the mouse."

One of the planks of the anti-DRM argument is that no consumer ever buys something for the value that a DRM regime adds. However, there are certain types of content not currently available that could be enabled by an appropriate use of DRM technology. The idea of a new releases podcast from a radio station featuring full tracks is without doubt one of them.

My wife is not asking or expecting that XFM (or 6Music or Virgin Radio or whoever) give her for free an mp3 file of the top ten new releases each week that she can then keep for ever without rewarding the artists. What she wants is the opportunity to time-shift that recording once, so that she can listen to it offline, at the time of her choosing.

As she put it, if her choice is between:

then the DRM-enabled podcast that allows her to listen to a song once and then have the option to buy it is the choice for her. Still, those for whom all DRM solutions are wrong would seem to rather that as a consumer she doesn't get the opportunity to have that choice at all.

In our conversation she also said:

The biggest loser in all of this, however, is without a doubt the BBC's backstage.bbc.co.uk mailing list itself.

In the space of the last few weeks it has stopped being a pleasant place to discuss mash-ups, swap interesting links, and point out upcoming events. Instead it has rapidly become an unpleasant echo chamber, constantly reverberating to the shrill voices of a couple of anti-DRM zealots, who insist on hijacking every thread with their blind faith mantra that digital distribution should render creative work worthless.

It has become a very depressing daily read indeed.

It has become a very depressing daily read indeed.

I agree completely. I'm still subscribed to the list, but I've been largely ignoring the DRM discussions. Which doesn't leave much to read at all.

I finally snapped myself the other day and started filtering. And that might help kill off some of the arguments given I must have been fueling the fires a few times.

It's ironic actually that a few weeks before I'd been having a conversation with someone who passionately believe that in the future we won't buy music, we'll merely rent it for as long as we want it. The Napster model.

I also have to say, I like the idea of a one-off play podcast of certain radio shows. I always wanted to be able to download a copy of (say) Radio 1's The Blue Room (may it rest in peace) and listen to it on my way to work.

Alas, like many people, I access the internet through a corporate network and a locked-down computer, so I can't play open format Ogg files. I'm afraid it is strictly closed formats like mp3, wma and atrac for my Sony machine.