There has been a bit of a buzz around the announcement of a service called Slacker in the USA, which will be a device which plays personalised radio stations to the user on the go. Matt Marshall at VentureBeat even touted it as a potential "iPod killer". 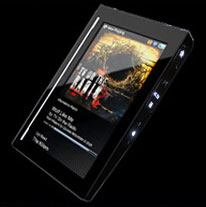 As I read through the promised feature-set, I started to get a little nagging voice in my head, saying "Hang on, isn't....this....what...I..do?"

Because for the last few months I've been working on Sony NetService's StreamMan product - which, cue deja vu, plays personalised radio stations to the user on the go.

The principle difference between our project and the Slacker proposition is that StreamMan goes to 3G mobile phone devices, rather than being dependent on marketing a specific receiving device.

Oh, plus the small matter of ours already being on the market.

The Streamman service has been available in Europe for some time, badged as Vodafone RadioDJ via the Vodafone Live! 3G portal. Users are able to create their own channel based on a combination of decade, mood and genre. The music is selected using a vast array of metadata attached to each track, for things like whether there are harmonies, whether the vocalist is male or female, the tempo and the instrumentation used, and even down to subtle details like whether the lyrics are political or not. 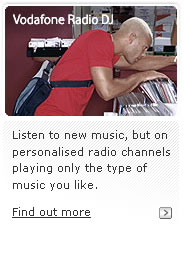 As users vote that they either love or hate a song, the channel becomes more tuned to their taste. New releases are continuously added into the pool of music available for streaming, and users can add tracks to a wishlist for later purchase, or instantly download them via both their phone and their PC using Vodafone's music store.

The service is available to Vodafone subscribers in quite a few territories in Europe, including the UK, Germany, Greece and France - provided they have a compatible handset. In the UK, for example, the Nokia 6630, 6680, N70, N80, N91 and N73, Samsung ZV40, Sony Ericsson V630i and K610i handsets are all able to use the service. You have to be a Vodafone 3G customer, and the cost is a monthly subscription fee or on a daily pay-as-you-go basis.

One feature advantage that Slacker does looks to promise over Streamman is the fact that rather than streaming directly to the pocket device, it caches the music, so if you go out of WiFi or satellite range your music doesn't stop. Currently for the Vodafone RadioDJ service if you go out of Vodafone's 3G network coverage you lose the stream - although there is a lightweight WAP-based version which works on less than 3G coverage in some territories.

The principle weakness of Slacker though, to my mind, is the fact that it still requires carrying around a separate music-only device on top of the one that you probably already have in your pocket to make phone-calls. I can't really see it killing the iPod, and I certainly can't see it killing a product you might have heard of that is also arriving in the USA later this year - the small matter of Apple's iPhone.