My 'biased' view of the Biased BBC blog - part two

Yesterday I wrote about my visits to the Biased BBC blog, and why I think it is a useful and enjoyable place to spend a few minutes on the web each day. I also pointed out a couple of the success stories the site has had in getting the BBC to make changes to online content.

I find though, that there is a real difference between what is written on the blog "proper", and what is posted on the regular open comments thread. Biased BBC usually operates an "Open comments thread" near, or at the top, of the homepage, which is refreshed every few days. These threads can often run into hundreds of inter-twining comments which can be quite difficult to pick through.

The site has the following disclaimer for the open thread comments:

Please use this thread for off-topic, but preferably BBC related, comments. Please keep comments on other threads to the topic at hand. N.B. this is not an invitation for general off-topic comments - our aim is to maintain order and clarity on the topic-specific threads. This post will remain at or near the top of the blog. Please scroll down to find new topic-specific posts.

I can't help but wonder whether the site would be better off replacing that mechanism with more of a forum format, which made it easier for people to pick their topics to comment on and to follow some of the interesting conversations and debates that develop.

Despite the good intentions of the open thread, often, it seems to me, the content of some of the comments undermines the credibility of the site as a whole. This is a real shame, as I've mentioned that I believe the editorial content can raise interesting and useful points about BBC output, which I'll be coming to later in this series of posts.

Recurrent themes in the comments that I don't find to be particularly credible, though, include:

It is quite common for users to pick up on something like a Yahoo! News "story", which is two paragraphs of copy from Reuters or AP, and huff and puff that the BBC isn't covering this story since it deosn't fit into the leftist BBC worldview or some such accusation.

This conveniently ignores the fact the BBC News online, unlike services like Yahoo!, is not simply a service for reproducing the newswires, and doesn't generally cover anything except the biggest breaking news stories until it has a fully fledged article on the topic, or has at least verified further the story being carried on the wires.

After all, as Chris Paterson observed in his 2006 paper on "News Agency Dominance in International News on the Internet" the BBC is one of only four major international news gathering organisation left on the web:

It isn't just agency stories that provoke this response. Yesterday, for example, someone was complaining that the BBC wasn't covering the Blue Peter quiz story - even though it had featured in the breaking news ticker online, was story #3 on the UK BBC News homepage and story #1 in the Entertainment section. Which doesn't count the coverage on the Blue Peter site's own front page. Or the fact that it was the main BBC press release of the day. 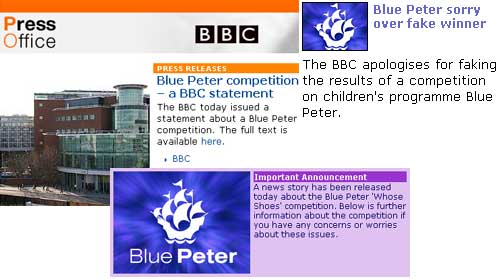 Another regular occurence is the assertion that the BBC has made a factual error (examples of accusations in the last few months have included crediting a carol on Songs of Praise as "The First Nowell" or the BBC stating that Gerald Ford was America's only unelected President), only for the commentator to have not fact-checked it properly themselves, and for it to be shown that they were the one who was incorrect.

I must credit the Biased BBC comment site owners with allowing both the original accusation and the correction to remain published. In fact, on the site, the moderation is very slight and light-handed, and only posts that are excessively sweary or offensive get zapped. Calling Yasmin Alibhai-Brown a mad leftist loud-mouth would be acceptable, but calling her a "bitch" isn't, which seems to be a good example of pro-acive moderation that doesn't inhibit free expression. Even when people disagree on the site, out-and-out flame wars and trolling are very rare.

3) Searching Google for something "proves" that the BBC is biased

The only thing that searching Google proves is that if you execute a particular search query on Google on a specific date, you get a set of results from whichever datacentre your query reaches, once Google has adjusted the results for whereabouts you are searching from, what your personal settings are, and according to whatever they have in their index at the time.

Which doesn't imply a great deal of accuracy in determining what has historically been published on the internet, when it was published, or by whom.

This does not stop people using the raw numbers Google puts up at the top of the page (which like most search engine mechanisms are quickly calculatedguesstimates) to conclude that the BBC has published x% more articles about this, or y less articles with the word "Castro" and "dictator" in then than with the words "Pinochet" and "dictator".

You can't, though, rely on Google's figures or rankings being an accurate measure of the content of the BBC News site.

Take this example - at the time of writing, a search on Google for the words "nazi tiger" and restricting the results to the BBC News site brings up this story from February 23rd 2007 at #4 - Tiger kills girl at Chinese zoo

The word "nazi" does not appear in the text of the article at all - so why does Google rank it so highly for that search term?

Well, looking at the cached copy reveals that the story was last indexed on March 9th, when at the number one spot in the "Most Read" stories section was "Living hell of Norway's 'Nazi' children"

Anyone using this kind of Google 'evidence' is failing to take into account what was in the the right-hand menu at the time a piece was indexed (not published) for any given story. That includes not just the headlines of what was the most emailed or read story on the BBC that day, but also the top stories from the same index section, the titles of related internet links and the headlines of any previous story linked to that story ID by the journalist. All of which provide ample scope to combine words that do not actually appear together in the main body text of the article, which renders Google's figures virtually meaningless.

In the next post in this series I'll be looking at another three ways that the commentators on the Biased BBC site regularly try to demonstrate BBC bias and, to my mind, regularly miss the mark, before turning my attention to some areas where the Biased BBC site does raise interesting questions about the BBC.

they did the same non-mention last year too.

Estimates of people with Irish ancestry currently living in Britain are between 6 million and 10 million people. (i'm including folks with Irish grandparents, but parents born in Britain).. so its a not insubtantial proportion of the UK population, even if 3rd or 4th generation Irish support England in the footie and see themselves as British.

but they're also the people that turn up at the local Irish centre on Paddys day for a pint or two.

its just a small point - but i'm always perplexed at why the BBC main news headline dont even give a slight nod to this - a simple 5 second mention would suffice.

Contrast for example with the extensive Hajj & Meccah coverage.

I think we had to agree to disagree about this at the time ;-)

You say that the BBC did not cover St Patricks Day on the news and therefore is biased.

But what you are saying is that the BBC didn't cover St Patricks day the way you would like it to which is not the same thing at all.

As I pointed out to you at the time, St Patricks Day was the main promotion on the BBC's homepage. Radio 1Xtra had a St Patricks day party. BBC Four had TV programming dedicated to St Patricks Day.

Here are St Patrick's days recipes from the BBC:

If you'd left your email address, I could even have sent you a St Patrick's Day eCard from the BBC - admittedly from 2002 but I'm sure you can still send them today

i was merely referring to the 6 o clock and 10 o clock news. the main bulletins of the day.
that is all.

yes. but they were tucked away and NOT on the main news page.

no. i didnt say that at all.
a brief nod,or acknowledgement - no more than 5 seconds or even less, would have sufficed

the question you have to ask is - why was it bumped off those main tv news bulletins in favour of something else?

the next question you have to ask is - when Hajj is on , does that get a mention on the 6 o clock news?

so why one, and not the other?

its an editorial stance that i find quite perplexing to be honest. if you can get an reasonable answer on that one, then great.

in a similar tone, over at B-BBC we've been having a "passover watch", looking for references to Passover on the main BBC news site.

we cant find any.

rather than an accusation of "bias", this was more an inquiry into bbc "groupthink" on the main TV news bulletins of the day.

A kind of "bbc groupthink" Rorsharch test so to speak,rather than a complaint on my part. (i have no complaints as i can get all the news on this from RTE Online anyway)

The lack of coverage could well be a genuine oversight on the part of major news bulletins editorial teams.

The question then is - if "groupthink" is excluding stories like that, what else is being overlooked?

Thats kind of where i'm coming from.

As a Rorschach test about somebody's agenda, it works both ways of course ;-)

Looking at the balance of coverage between Hajj and Passover or Easter or Christmas might be appropriate.

But the Hajj vs St Patrick's Day?

One is the climax of the most sacred period of the year for all threads of a religion with 1 billion plus followers on earth.

The other is one Saint's Day out of a firmament of saints - my Dictionary of Saints lists 1,400+ and doesn't cover the Orthodox Church in any great depth - which is celebrated in particular by one branch of the Christian Church. On one island. And mostly exported as a marketing opportunity for Guinness, rather than anything with any kind of serious religious meaning.

Of course, the omission of a mention of St Patrick's day on the news is perplexing for one reason - since on the other 354 days of the year the majority of people on B-BBC seem to generally labour under the impression that the BBC is pro-Irish Catholic Republican in everything it does, to the disadvantage of Unionism.

It is because I recognized the need for a forum to better preserve and relocate individual themes and posts that I started the Biased BBC - The Forum website. I actually offered it to BBC Bias Blog but Natalie declined it, so I've carried on with it ever since.