My 'biased' view of the Biased BBC blog - part three

This week I've been writing about the Biased BBC blog site, about why I visit, some of the small successes it has had in influencing BBC output, and the ways in which some regular complaints made against the BBC don't bear up to much scrutiny. Today I wanted to look at three more accusations of BBC bias that regularly appear in the comments threads on the Biased BBC blog - and explain why I don't think they demonstrate bias at all.

4) Using 'Tories' rather than 'Conservatives' in headlines.

The frequent complaint here is that "Tories" or "Tory" is used in a deliberate way by the BBC as a perjorative term against the Conservative party. I've always found this a little odd, although I'm willing to be corrected on it, because I've never understood the idea that 'Tories' is perjorative. It is the standard shorthand for the Conservative party throughout the print and online press in the UK, whether commercial or non-commercial. It might have been perjorative in the 1700s and 1800s when the term was first coined about politicians, but the original sense seems to have been obfuscated through meaning several different political groupings through British political history, that pre-date the modern Conservative party.

I've never heard anyone (inside or outside the BBC) use it invectively as abuse, only as the short hand. It seems self-evident to me that the consistent use of "Tory" and "Tories" in web headlines and on-screen captions on BBC News 24 (and for that matter ITV and Sky) is all about caption and headline writing sub-editors saving 7 or 8 on-screen characters, in the same way that the Liberal Democrats are routinely abbreviated to Lib Dems.

And it isn't as if it isn't used elsewhere in the British press - of whatever political persuasion. 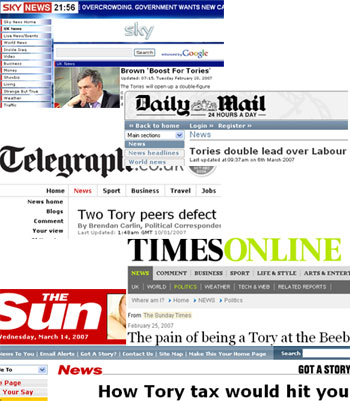 In recent months there was a debate about whether the BBC should have carried an interview with a spokesman for the Taleban in Afghanistan, which I think is a perfectly valid debate, and one which should be had. Many comparisons were made with whether the BBC would have carried an interview with leading members of the Third Reich during the course of the Second World War.

Whilst I understand making the comparison, for me, the situation is markedly different. Firstly the Second World War did not take place in the media landscape we have today, and secondly, Britain is neither formally at war with the state of Afghanistan, nor is the Taleban formally the government of an "enemy power". That, though, is splitting hairs.

What is evident, though, from the comments on the Biased BBC site, is that a large number of contibutors feel that by quoting sources the BBC is endorsing or expressing them itself.

To take a not-so-serious example from a recent thread, one commentator recently complained about the BBC's attempt to re-write the history of 2000AD as a tool of anti-Thatcherism.

Well BBC seeing as I bought and read 200AD for at least the first 10 years of its life I’m somewhat surprised at how you say that Thag [sic] was really Maggie. You see BBC as much as you can try and reinvent the past in which to shout out “Maggies fault” There is a slight problem with your TARDIS. 2000AD came to life on the 26th of Feb 1977. Maggie came to power on the 4th of May 1979. A good two years after Thag [sic] brought 2000 to the masses.

Sadly, there was also 'a slight problem' with this line of argument. The comments about Thatcher came from direct quotes from the likes of Pat Mills and Alan Grant - not any re-invention by the BBC:

"Many of the stories we wrote were taken from the headlines of the newspapers. We just put a futuristic spin on them.

There were genuine social problems, particularly from the Thatcher days. It was obvious to us that Britain and the whole world was turning into a right-wing society."

Likewise, in the last few days in the Biased BBC comments, the BBC has been accused of 'spinning' the story of the July 21st attempted terrorist attack in London to put a good light on the people on trial at the moment:

Apparently the bomber went to all the trouble of making high explosives and travelling down to London, just to waste his time, just to scare people with harmless backpacks of inert material.

Of course, what fails to be noted is that the report in question is coverage of the trial, and is reporting what the defence team have been saying in court. Not only isn't it the opinion of the BBC, the statements are clearly marked as direct quotations, and the BBC is under obligation by law to report the men as 'accused' until the trial verdict is reached.

6) Reading opposing "bias" into the same set of articles

The comments on the site are not exempt from proving that sometimes the type of 'bias' can be very much in the eyes of the beholder. The coverage of the release of David Irving from an Austrian jail was a case in point. Some people leaving comments on the Biased BBC blog accused the BBC of the "reinvention of a Nazi as some sort of Martyr" because of freely quoting David Irving, and of still describing him as a 'historian' when court judgements against him have shredded his academic reputation.

Yet on the very same thread other BIased BBC contributors claimed that the reports were demonstrating a clear bias against Irving, and were demonising him as a far right stooge by, for example, publishing a page only asking Jewish groups for their reaction to his release - "How can anybody not see through this classic example of good old bias reporting?" asked one person.

What I find a shame about all this is that I think that the mainstream body of the site, the actual posts written by the editors and named contributors, sometimes raise points that the BBC should be aware of, and seek to address within both the online journalistic and broadcast operations of the corporation.

Next week I'll be continuing this series of posts about the Biased BBC blog, and looking specifically at a couple of areas where I believe the site has asked legitimate questions of the BBC's recent output, particularly on the web.

There was a largely, if not sympathetic, then tolerant interview with Jean Marie Le Pen on the Today programme this morning. I'm surprised that Biased BBC hasn't mentioned it.

You seem to be basing a lot on what people post in the comments sections of B-BBC. Isn't that a little unfair?

The real problem with BBBC is that the real examples of bias they and those who comment there find get lost in a sea of nonsense claims.

Hi Ralph, I have specifically been looking at some of the frivolous and easily dismissed claims from the comments site in the last couple of posts, but in the next few posts I will also be looking at some examples turned up by BBBC which are hard for the BBC to dismiss. Hopefully at the end of the series you will think I have done as reasonable and fair job as you could expect from an ex-member of BBC staff.

The BBC is biased against anything it disapproved of and therefore bigoted.

I have posted polite and genuine comments but because some muppet in the BBC disagrees with my comments they don't get displayed.

This therefore is not freedom of expression if snooty tissues in the BBC have to agree before you can have your say.

Therefore public opinion is not reflected if not all can have their view which satisfies publishing standards as rejection is just an excise to invalidate the opinions of some of us.

In my opinion the BBC are narrow-minded and I don't care what others think.