Over the last week or so I've been writing about the Biased BBC blog, which claims to hold the BBC to account for the biased coverage it broadcasts over the airwaves and online. So far I've looked at why I visit the site in the first place, some of the successes the site has had in altering BBC output, and also several reasons why I dismiss some of the complaints. Earlier this week I started looking at one of the areas of BBC coverage where Biased BBC raises interesting questions of BBC output, the debate (or lack of) over global warming. Today I want to look at an even more contentious area.

The coverage of the conflict between Israel and the Palestinians is probably the most challenging area the BBC faces in balancing news coverage, and I'm certainly not one of those peope who believes that the BBC gets it spot on in every report on every output medium. It should also be pointed out that a few minutes on Google will turn up plenty of people arguing that the BBC offers a pro-Israeli slant on the news. However, the general consensus of opinion on the Biased BBC blog is that the BBC is blatently and repeatedly biased against Israel in their coverage of the situation.

An independent study commissioned by the old BBC Board of Governors didn't find that to be the case, in fact it slightly erred on the side that the BBC didn't put across fully the disparity between the two sides, and thus was doing a disservice to the Palestinians. Previous to that, the contents of the 2004 Balen Report are not fully known, thanks to the BBC's attempts to prevent it being released into the public domain, but this is thought to be more critical of the coverage in the other direction.

Some commentators on the Biased BBC blog are not arguing that the BBC should take a neutral stance on the issue, they believe the corporation should 'grow a backbone' and stand up for what they say is right. And frequently on the site commentators leave references to the "Pretendistinians", which serves to make their own particualar bias on the issue quite clear.

And some of the claims on the Biased BBC blog are a clear nonsense. In the last few days, following an incident, the Israeli's recalled their ambassador to El Salvador in disgrace. In the comments thread of Biased BBC this was more clear evidence of anti-Israeli reporting by the BBC

"The BBC will scour the earth to sling mud at Israel. When is the last time you have heard any news from El Salvador?"

It didn't seem to matter to them that in the UK the story also appeared in The Times. And The Guardian. And The Sun. And in the 'weird' section of The Metro. And the Daily Mail. I could go on...

However, the Biased BBC site has been able to point, over the last few weeks, to a disturbing series of errors, ommissions, or as they see it, systematic anti-Israeli and anti-Semitic bias on the BBC's website. As a "Beedoid apologist", as I've been called a couple of times on the site, it has not been pretty to watch.

Take this version of the "Middle East Crisis" in-depth navigation panel that adorns every story about the Israeli-Palestinian conflict. This was live on the BBC News site towards the end of last year.

Now, look carefully at the section in the bottom - "Voices" - which offers "Palestinian viewpoints" and "Lebanese viewpoints". I don't know about you, but I'm pretty sure there is another nation in the region that might have some people equally entitled to express their viewpoints on the topic as well.

The case argued by some at Biased BBC is that anti-Israel feeling within the BBC is so virulent and infectious that it manifests itself as broader anti-Semitism.

Take this blunder with the Today programme trying to recruit people for their listener's panel. Look at the form perspective contributors had to fill in. 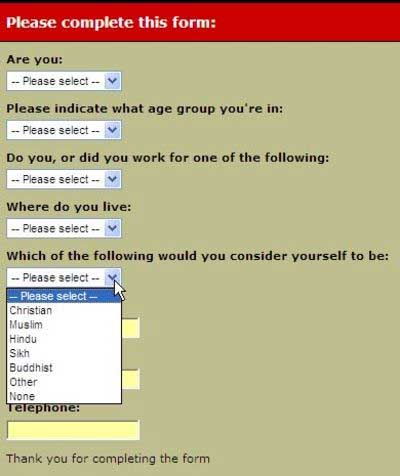 Now there are six major religious groups recorded in the UK's census. Can you guess which one was missed off the Today programme's list, provoking the ire of the Biased BBC crowd?

Jewish was only added to the list after the BBC was prompted by complaints.

Innocent mistake or not, it seems astonishingly careless to make this kind of error when specifically recruiting a panel where religious preference is going to be a major factor on how some of the most pressing issues of the day are debated, whether it is domestic terrorism, multicultural integration, Iran's nuclear programme, or conflict in the Middle East.

Now, given the choice between explaining things with conspiracy or cock-up, I'd suspect the latter every time. However, this doesn't stop people with an agenda to prove that the BBC is institutionally anti-Semitic being able to seize on these kind of details to try to demonstrate a pattern of behaviour by the corporation.

In the next part of this series of posts I want to go on to look at a very serious incident that took place last month on one of the BBC's blogs, where due to a comprehensive failure of the moderation and complaints procedure, racist anti-Semitic material was left published on the BBC site for 24 hours.

The current home page for BBC's Israel and the Palestinians home page does now include Israeli voices in the right hand nav:

It would be useful to see the full page in the example you use.

I don't have a full-page capture of it, but it was on this story - Israel to resume militant strikes - from December 27th

As an aside it kind of has a weird headline anyway - because it isn't clear whether Israel is striking at 'militants' the noun, or whether 'militant' is an adjective describing the type of action Israel is taking

Headline writing is quite difficult. My hunch is that the voices in the right hand nav are the same for whatever story is up there.

>> Headline writing is quite difficult.

I know - I got sent by the BBC on a training course as a sub-editor once upon a time. Not that you would know it from the spelling and punctuation on here, mind you!

Biased BBC believes that the BBC is pro Palestinian despite any evidence to the contrary because, as you've previously identified, they are right wing loons who believe that Thatcher was a bit soft. Whenever an Israeli spokesman comes on, they're never questioned as to why they claim to be more peaceful than Iran, despite attacking all their neighbours pretty regularly, or why, despite this, they should be allowed nuclear weapons and Iran shouldn't. Obviously, by criticising Israel, I am a dreadful nazi anti-semite, but so be it.

Have you considered the BBC's stance on Zimbabwe? I posted, in my usual considered way, on the editors blog, the opinion that while the methods might not be pleasant, one ought to question exactly how it came to be that in an African country, the overwhelming majority of the land is owned by whites. Did they buy the land at a fair price on the free market? Strangely, unlike your pro-BBC comment, it wasn't published.

Sorry. That went on a bit.

>>As a "Beedoid apologist", as I've been called a couple of timeshttp://james.cridland.net/blog/2007/03/08/fantasists-and-lazy-journalists/ - not even bothering with a minute's Googling. You're welcome to act as the BBC's unpaid apologist for this; or, alternatively, try to leave your emotional ties to the BBC and concentrate on something more fulfilling.

>> they're well-argued and well-written

A good point, it is quite difficult to convey that often within 'the BBC' bit of the BBC there was an "us v. them" attitude towards the Governors - particularly, for me, when they sometimes handed down ludicrous edicts about new media.

True, but then at least it has kept me out of trouble, and I haven't been using the time to just write this rather long set of posts - they're just the first fruits of my near month-long solitude in Salzburg to be published. If fruits is the right word?

I would also say that if it had been possible, and the work culture here had permitted it, I would have spent the last six months writing about the interesting bits of the work I've been doing at Sony - but sadly I can't, so I haven't.

Which has been quite a weird and alien experience for me.

Normal service resumes next week I promise - you know - random moaning about British newspapers I've only read online or, good god, have these people ever used their own software - that sort of thing...

"they are right wing loons"

I'm afraid that this is the kind of argument that does not hold any ground. I think you will find that there are quite a few "left wing loons" that post on the blog and have the same opinion of the bias in the Middle East reporting. This type of "labeling" pops up all the time to stifle debate. First of all you label someone a "denier", "sexist" "rascist" or a "right wing loon" and then you do not have to listen or debate the essence of the point said. This PC type of "debate" stifles real debate.

your post seems to give some credence to the BBC is anti-semitic argument. If you really think so, a quick review of the Board of Directors should reveal that the BBC are doing a spectacularly bad job of it...

I take your point Andy, but what I think I am showing is not that I believe it, but that the BBC is unwittingly providing enough 'evidence' to allow people to support their view, if they do believe that the BBC is anti-semitic

Excellent site, Martin, thanks very much.

I do not see why the BBC should be pro- or anti-Israeli as such. However, if one considers Israel as virtually a military outpost of the US in the region and takes into account the US-UK alliance in occupation of neighbouring Iraq and Afghanistan, then it is easy to see a reason why the BBC might fail to address the bigger picture in the region and instead concentrate on the petty politics and individual incidents.

I would like to see some BBC reporting on what is happening to Iraqi oil and what benefits the Iraqi people are seeing from this huge natural resource; also, as to what happened to the huge sum ($18 billion, I seem to recall) which the US supposedly set aside to expend in reconstruction of the country after the invasion.