BBC Jam closes today - how far will the repercussions be felt?

Today sees the suspension, pending review, of BBC Jam, the BBC's digital curriculum service, which was announced last week by the BBC Trust.

Last week I littered my initial reaction liberally around various comment boxes on the web, but having had a bit of time to gather my thoughts on the subject, four points stand out for me

1) The loss of business to the independent web sector
The complaints portray the BBC as a massive well-funded elephant that has just walked into the eductaion market and plonked itself down.

However, the conditions of the approval of the BBC Jam service stipulated that 50% of the work had to be externally commissioned. Which means that of the much touted £150 million budget for the service, around £45 million of it was being ploughed not into some bottomless pit of BBC content creation, but into small to medium web companies in the UK.

PACT have complained about the impact on the businesses they represent, and whilst the BBC is in a cash-flow rich position where it can afford to have staff spend time to draw up a new strategy for the service, and propose what the future will be for it, smaller businesses can't. The impact of the suspension goes well beyond the 200 or so jobs at the BBC that might be at risk.

2) How could the regulatory framework have gone so wrong?
The regulatory path to the BBC even getting approval to do the digital curriculum project was torturous. How can it have been got so wrong?

Either the government have failed to put the right regulation framework in properly, or the BBC have broken their commitments to the areas that BBC Jam would be involved in.

Between the BBC's application to start the service and the DCMS giving approval were eight months of industry consultation. It is outrageous that you could spend the time, taxpayers money, and effort, on the intial consultations and reviews, and still end up with this result.

At the time of approval, Tessa Jowell announced:

I've listened to the concerns of commercial providers of digital learning resources about the impact of Digital Curriculum will have on the market. The industry is a rapidly expanding one. There is room for everyone. These conditions will prevent the BBC from dominating this market, but it's right that it should play an important role in a competitive and growing market for digital learning resources.

3) The internet landscape has changed tremendously since the project was approved
The project itself may have fallen foul to some extent to the pace of technological change, compared to the inevitable slow rate of development at a behemoth like the BBC.

When I worked at the BBC and the digital curriculum idea was first being mooted in the early 2000s, the idea of delivering virtual learning environments and video over an internet connection to schools seemed cutting edge, and something that only the investment power and broadcast expertise of the BBC could bring to the table.

Nowadays, the biggest issue facing schools about internet video content delivery is whether the pupils are uploading happy-slapping, gansta taunts and amateur under-age pr0n videos to YouTube themselves.

Meanwhile, the legitimate use of new media in the classroom has gone well beyond what was imagined in the early BBC Jam vision, thanks to the innovation of teachers across the world using tools like Flickr and cheap digital video-making to enhance their lessons.

4) Who is looking out for the taxpayer here?
What annoys me about the situation more than anything though is the sheer waste of public money involved.

The BBC has spent the last few years using Licence Fee payers money to develop and commission educational content that is free at the point of delivery for the UK's education system. Some commercial companies have complained that it encroaches on their turf, and stops them making money by delivering similar content to the same market at a cost. And so the BBC Trust suspends the project.

But it is the public purse picking up the cost at both ends of this equation.

It is Licence Fee payers money that has been squandered on building content that will not now see the light of day in its current form. And it is taxpayers money that will instead now be funding the purchase of commercial educational material.

The EU's regulations on state subsidies in commercial markets are looking after the interests of Britain's leading commercial educational publishers.

But who is looking after the interest of the taxpayer here?

How does the suspension of the service fit in with the remit of the BBC Trust to ensure the Licence Fee represents good value for everybody in the UK?

On a lighter note though, the suspension of the service will at least help out in one field - search.

I used to use the word 'jam' in my presentations as an example of a simple word where the person using it knew exactly what they meant, but the computer would not understand the difference between a traffic jam, fruit preserves, or Paul Weller's old band. And then the BBC Jam brand added yet another fly into that particular search engine results ointment... 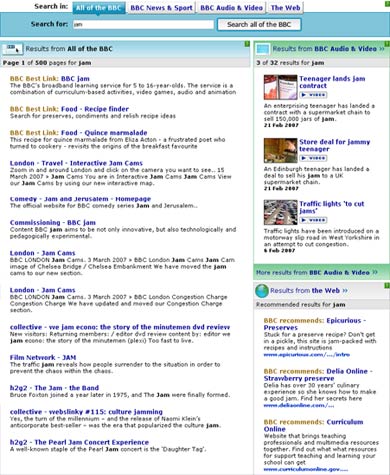 "The EU's regulations on state subsidies in commercial markets are looking after the interests of Britain's leading commercial educational publishers. "

The commercial educational ICT providers, by 2008, will have been effectively subsidised by the UK govt to the tune of over half a billion pounds in e-learning credits. That's money given to schools, ring-fenced, to be spent in this sector.