With his open letter to the music industry, Steve Jobs has done an excellent job of shifting the attention away from Apple's iPod/iTunes DRM based lock-in, and onto the music industry that supplies the content driving the sales of Apple's hardware. I think my favourite quote amongst the responses I stumbled upon on the web was:

"The greatest trick Apple pulled was to build a market where lock-in is mandated, but convince the world that this was something they did reluctantly, at the behest of the villainous recording industry."

That quote was actually from a few months back before Steve Job's DRM appeal. Well, I've just found myself at the sharp end of Apple's restrictive DRM regime - which seems to be part of a really bad run of luck with DRM controlled content I'm having at the moment.

Since I came back from my last trip to the UK at the end of January, I've found that my iPod will no longer play any of the music that I purchased from the iTunes music store. The files appear to be on the machine, since I can find the tracks in playlists, and by searching for them directly. However, when I go to play one, the title, artist, album title and artwork appear fleetingly on the screen, and then my iPod skips onto the next track without uttering so much as a squeak of the music I've paid for. 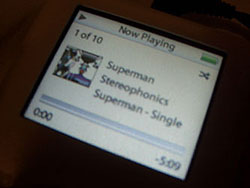 Now, being technically minded, when something goes wrong with my computer-driven electronic gadgets, I always want to try and de-bug it. Given that I could play the content before I visited the UK, I assume the problem occured the last time I synched my iPod with my computer.

I should say straight out that I have two computers with iTunes installed, my main PC which is stored back in the UK, and my laptop which is here with me in Salzburg. I have purchased tracks from iTunes on both the PC, and also on the laptop as well, when using it in both Austria and Greece.

(And if you want to know why I purchased music from iTunes when I know I could have stolen it for nothing, you should see my "scientific" formula for when people decide to purchase rather than steal).

Both machines are (or at least were) authorised to play purchased tracks from the same iTunes account, which in theory should let you authorise 5 different machines. Previously I have been cautious and copied my iTunes purchases from the laptop to the master library on the PC by burning them to CD and re-ripping them. I've got no problems playing those tracks on my iPod.

The last time I updated the music on the PC though, I made a DVD of mp3 files of all the new music on my laptop that I wanted to transfer. On that DVD I included one iTunes DRMed file which I purchased on the 14th January 2007. I'm guessing this is the file that has caused the problem, as otherwise I did not edit, move, or adjust any other DRMed file on either machine. And the PC in the UK has not been online since December 2005, which rules out the possibility of some web based event affecting the tracks I bought before then. Well, unless a computer automatically gets deauthorised if it hasn't phoned home to Apple iTunes HQ after a certain period of time, which would be 14 months in this case.

The problem for me is what to do now, which really highlights how DRM works against the consumer. I'm well aware that currently having several bases in Europe makes me an edge case, but the computer that holds my iPod's master iTunes library is swathed in bubble-wrap in a spare room in East London with no internet connection. And my iPod with the unplayable tracks is in Austria.

The two may possibly meet in early March when I can re-synch them and see what happens. However, I don't hold out much hope for that being a solution. If Apple's DRM regime has decided it needs to phone home for help, I'm stuck - the PC is in a room without a phoneline, and the broadband connection into the house where it is staying isn't one I can hook that particular machine into as it is locked down to one machine.

So it looks like I've lost my puchased music until I get the PC shipped over to Greece and get an internet connection installed in our house there and can have a good fiddle around. Thanks Steve.

The thing is, as I say, I'm a tech-savvy person, and I'm pretty philosophical about it - I know I should have already ripped all this DRM stuff off the tracks by burning and re-importing them. However, I do feel that the music industry and the companies like Apple serving up DRM restricted content are storing up a world of customer relationship pain for themselves in the future. As iPods and Macs and PCs and mobile phone handsets die, and consumers realise they are unable to recover the items they have paid for, they are not going to be best pleased.

And the biggest irony in my situation?

Before Christmas I illegaly downloaded via BitTorrent a new release album by a major artist. I enjoyed the album, and a couple of tracks from it in particular. In the torrent I downloaded my favourite track on the album had a couple of glitches in it. So I purchased that one individual track from iTunes in order to get a copy of it at a higher effective bitrate, and without the couple of skips in it. And so now, thanks to Apple's DRM malfunction, when I play the album on my iPod, I can listen to all of the tracks from the album - except for the one track that I actually paid for.

Very interesting. I am also frustrated about something similar. I purchased tracks from various high profile music websites, ie, yahoo music, rhapsody, itunes, emusic, and musicmatch. However, one (or several of them) have now locked up my purchased tracks. And I notices at times when I hooked up my device to the various sites, some of the music on my player mysteriously disappears. Since the purchased tunes on my hardrive are LOCKED I cant redownload them to my player! What a rip off!