Search across photo-sharing sites from Kodak, Shutterfly, Snapfish and PictureTrail

I've been surveying search across some of the most popular photosharing sites on the web, chiefly to find out whether the tagged 'folksonomy' of Flickr that everybody raves about is really very helpful in trying to find different types of pictures using search.

What I didn't realise when I set out on this little study, was how few of the top photo sharing sites actually allow any kind of public sharing.

A site like the Kodak EasyShare Gallery seems more focussed on getting the user to purchase prints of their uploaded digital pictures, and sharing them with specifically named friends, than producing any kind of all-encompassing digital picture gallery - despite that being implied in the thrust of their recent branding advertising campaign.

Shutterfly also mainly focussed on selling the additional printing of photographs and trinkets, rather than the web hosting of images being an end in itself.

PictureTrail boasts of having picture sharing and social networking, but here again rather than acting as one central clearing house where everybody can see everybody else's photos, they define sharing as putting your photos into whizzy graphics that can then be embedded onto other sites. Whilst that is a great little service in itself, it doesn't require any kind of search on the PictureTrail site to facilitate it.

One site I looked at seemed to embody two major trends in internet e-commerce development over the last few years. Firstly a business like Hewlett Packard has been able to move into the online photography space not because they have a history of manufacturing cameras or printing photographs, but because they have a heritage of making computer peripherals. Secondly, they then called it something stupid rather than "The Hewlett Packard Online Photo Printing Service dot com" - in this case Snapfish. I fully expect to see in fifteen years time Paul Morley or Stuart Maconie waxing lyrical about how ridiculous internet branding was during the first decade of the 21st century in an "I Love 2006" special. Unless 'Time Trumpet' has already done that skit, of course. In any case, Snapfish didn't have a way of searching across stranger's photographs. 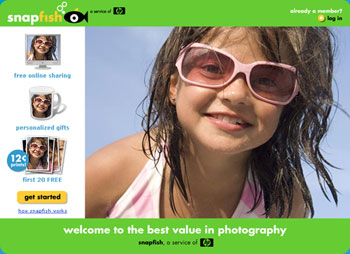 In fact in the top ten photo sharing and image hosting sites, I found that only Photobucket, Slide and Flickr had the kind of search facility that I wanted to evaluate. I've already looked at the first two, and in the next couple of days I'll be writing up my thoughts on the search facility on Flickr.