There are lots of reasons why you might want to do localisation or internationalisation. Here are some examples that I've picked out:

The UK's Home Office, when giving information on immigration to the UK, might consider that it wants to present different sections of that information more prominently if someone is already inside the UK, compared to someone outside the UK. By dividing your audience in that fashion you provide a service that is potentially more tailored to their individual needs.

Another example might be the site for a global event like the 2006 World Cup in Germany. Here you want to allow people to customise their information along the lines the language, and divide your content into different territories in that way.

The Visit London site is another great example. Whilst it doesn't narrow down to the level of whether you are already in London or not, it does at least ask you whereabouts you are coming from, and remembers that setting for you and adjusts the information provided accordingly. 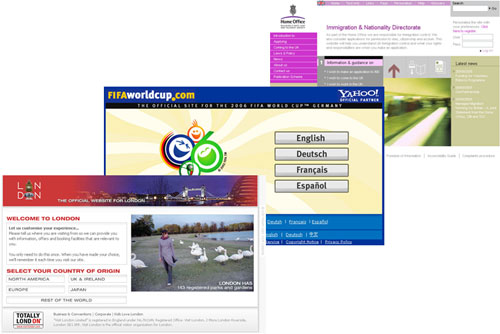 So these are all different ways of catering for diverse global audience needs, and it is something that the BBC has become increasingly aware of. User testing has shown that visitors outside the UK see the BBC site as primarily a destination for News, whereas in the UK the focus is much more on the breadth of the BBC's offering. For that reason the BBC launched a new international facing homepage back in December 2005, which focussed more tightly on the news, TV and radio services available from the BBC internationally. 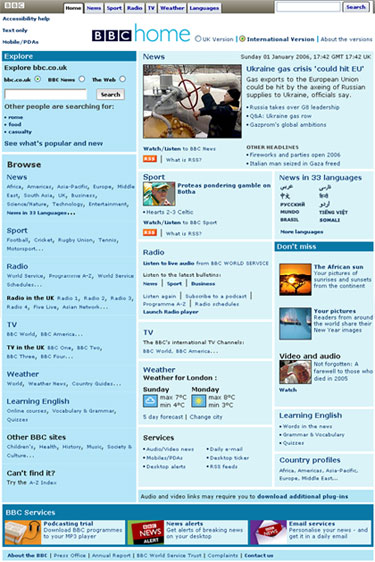 The BBC has the additional funding issue that the UK services are funded by the Licence Fee, whereas international services like the BBC World Service are funded by grants directly from the UK government, and services shouldn't be cross-subsidised. Dividing the audience along the same lines as the funding makes sense for the BBC's financial accountability.

One additional thing to consider is that you can actually do damage to your brand if you don't localise properly. In 2005 the BBC did a special homepage to coincide with the climax of the first series of Doctor Who. This saw the regular homepage replaced with a new design, dominated by a massive picture of a Dalek from the series. 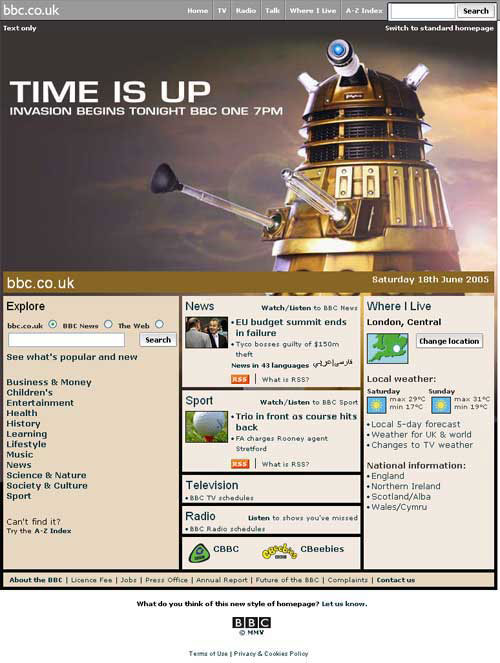 The homepage also set out to collect feedback from users, and one of the emails received back came from a visitor to the site from Singapore, who wrote to ask "Does the BBC really believe that the most important thing in the world today is what is on the television in the UK this evening?"

Now, as a fully paid-up member of the geek fraternity, my answer would of course be yes, it was by far the most important thing. More seriously however, the comment stuck with me, and really demonstrated the way in which decisions taken editorially as suitable for the UK focus of the homepage, were inappropriate for the global audience that made up around a third of the visitors.

So, if we think back to the first part of this article, when I talked about the different business needs and audiences needs that your web presence should be addressing, you additionally need to consider the international dimension. Are the business and audience needs outside of your domestic territory so different from your international users that they require a different strategic solution on the web?

This article continues by looking at the increasingly blurred lines between intranet, extranet and internet in large organisations, and at how to decide whether you require personalisation features on your website.

This article is based on Martin Belam's presentation "Understanding The Portal Concept Within A Federated Organisation" at the Ark Group's Gaining Online Advantage conference in London, October 2005