The Cybus Corporation on the web

That is the warning you get exploring the navigation of a new website from the Cybus Corporation. 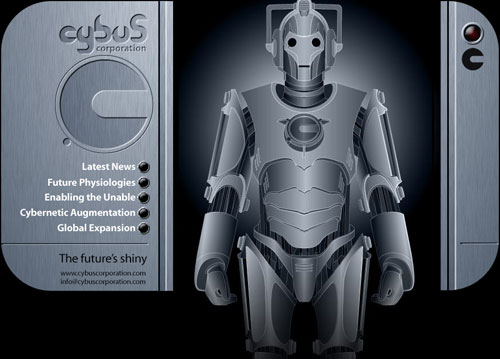 I can't believe the stuff on the web for the second series of Doctor Who is appearing so soon, in fact I don't even know how long this has been live. The Cybus Corporation site has a couple of pictures that haven't been available on the official site yet, include a group cyberman shot, and a cyberconversion. 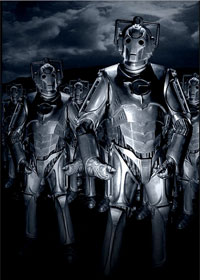 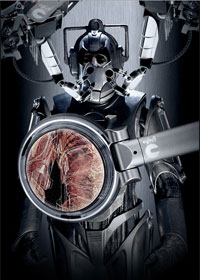 The text has also been done with a very faithful nod to continuity, referencing the locations for the 1988 story 'Silver Nemesis' and 1966 story 'The Tenth Planet'.

Cybus's greatest advances in the realm of bio-technology came in 1989, thanks in part to discoveries made at their aerospace division outside Windsor in the previous year, and at the corporation's Antarctic research station in 1986.

This whole Doctor Who revival thing is still putting a massive grin on my face.

If you check the smallprint, it seems this is nothing official...

"The creators of this website have no links or affiliations with the Doctor Who production team or the BBC. This is a fan-made website and any information contained herein is purely speculation or completely fictional."

Although they are doing it very well - they've already replied to my request for more information...

"Thank you Martin,
Unfortunately information about our Antarctic research station is restricted to level 1 personnel"

Cybermen dont' seem to be very good at working out what to do with apostrophe's. There very pretty and otherwhy's brilliant websight is a bit ilitrate in this res'pect. Maybe this vulnrabililility will become an important part of the fight back of the human's.

WHY DOESN'T ANYONE PROOFREAD ANYTHING ANY MORE, EVER? AAAAAAARGGGHHHHH.

I did wonder why some pages were being served off www.cacheinternational.com - which appears to be some magazine in Spain (cue initial wondering whether that was some interlinked part of the plotline - I decided it was too clever).

I really don't know why people like daleks when we have this lot...

The Cybus is a fan site. The images are all variations of the official BBC image, just photoshoped...

THIS IS NOT A REAL BBC SITE AND ALL THE INFO IS MADE UP BY A FAN!

Nice to see that there is so much public interest in the activities of the Cybus Corporation, please keep visiting the website to check on updates or sign our guestbook

I reccon there should be a recycling bin in your zeplins!

CYBERMEN ARE SUPOSED TO BE IN THIS YEARS CHRISTMAS SPECIAL 2007

Gaaaah! It isn't enough that I am about five weeks behind the current series and scared to turn on the interweb for fear of spoilers - now I have badly capitalised potential Xmas spoilers in my blog comment inbox.