It is a little difficult to convey to people outside the BBC the frenzy of activity that surrounds Children in Need every year. This year in particular my department have been very active, and we have had regular cake sales, a quiz night, people dying their hair, shaving their hair, or having their hair waxed off them for charity.

We've also put a lot of effort into covering the event on the BBC homepage.

Last year we did a one-off special of the page in Pudsey colours [above] - but the treatments we have used this time around have used the whole arsenal of variations at the editorial team's disposal, plus a new one.

Since the 9th of November the homepage has featured one of our semi-permanent panels supporting the Children in Need appeal, with links through to how people can get involved in fund-raising, donate, or even download a breakdancing Terry Wogan desktop applicaton. The mind boggles. 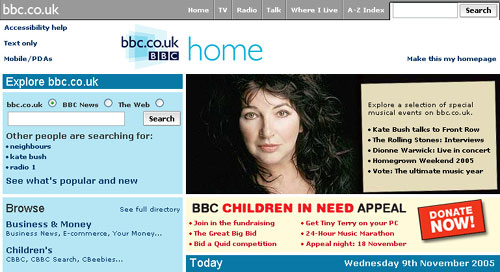 For today the page used the 'jumbo' promo format we have previously used to cover The Ashes and to commemorate victims of the July 7th London bombings.

And finally around 4pm today the page was refreshed to feature an updating totaliser of the total amount pledged to Children in Need so far, which will be updated during the night by our colleagues making the bbc.co.uk/pudsey site itself.

In all the 5 years I've been at the BBC, every year someone says "Why don't we have the running total on the homepage", and it has always faltered. It used to be that you couldn't get it into the promo space, or there was nobody to update it during the night, or we didn't have enough time to get it ready because somebody only asked for it two days in advance. I'm really pleased that my current homepage team line-up have finally delivered it.

Once again in Scotland we are subjected to the unprofessional rubbish for Children in Need. If we got a decent show I am sure lots more money would be raised. Instead everyone changing to other stations.