12 years ago in 1993 was the first time Doctor Who got involved in a Children in Need mini-episode. Eager anticipation of the first new television story for 4 years - "Dimensions in Time" - soon turned to horrified despair as it emerged it would involve the cast of EastEnders, a phone-in vote, and a second instalment broadcast during Noel's House Party the following day. 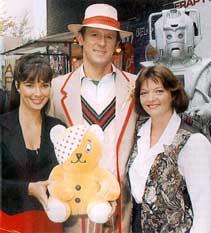 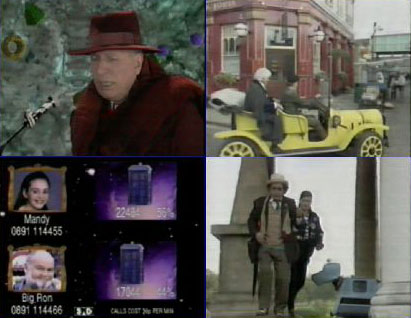 Even two years ago Doctor Who on Children in Need meant a spoof, as the Dead Ringers team, K9, Colin Baker and Sylvester McCoy, and various monsters took part in a Weakest Link skit. Slyv fluffed his lines, K9 didn't work, and the entire thing was devised to show off Culshaw's unerringly accurate bonkers fourth Doctor. At the time the BBC's press release said:

Doctor Who, the Cybermen and the Daleks are brought back to life by the Dead Ringers team, who find themselves on The Weakest Link in the ultimate evil showdown.

Ironically, in real Doctor Who of course, the Doctor's companion Rose found herself in a nightmare-ish version of The Weakest Link from the future during the episode Bad Wolf. A case of the real thing imitating spoof perhaps.

This time around one of the main attractions of Children in Need night was a Doctor Who scene, featuring Bille Piper and David Tennant. It was billed as 'proper' Doctor Who, written by Russell T. Davies, bridging the gap between 'The Parting of the Ways' and 'The Christmas Invasion', Tennant's debut proper. The scene was been trailled on the bbc.co.uk site using an image of K9 suitably attired with Children in Need novelty charity wristbands.

So tonight, as one of the BBC's hottest television properties, Children in Need Doctor Who aired as a 'serious' island of drama in a sea of light entertainment fluff. What a refreshing contrast to twelve years ago, or even two years ago.

Not that I'm a nerd or anything, but you're forgetting that The Five Doctors originally aired "within" Children In Need, as a 90-min drama during the charity telethon. Straight afterwards, Peter Davidson and the TARDIS "materialised" within the Children In Need studio in order to donate some props towards the good cause.

Tonight's little mini-drama was a real humdinger. Gave nothing away, but was fantastic nevertheless. What mobile webisodes ought to be like ;-)

Oh really? I don't remember that. I remember being very excited about The Five Doctors, as before video I had only read about the first three and not seen them until the 'Five Faces of Doctor Who' repeats in 81

Other programmes slotted into Children in Need back in 1983 included a non-special episode of Knots Landing and a James Last concert from the Liverpool Empire.

hides Radio Times back on shelf

I remember watching this from Ian Jackson's sitting room. What I don't remember is that there was any CIN either side of it. I think that kind of telly seemed like it was more for grown-ups.

i want to see the new doctor who series with martha