To work at the BBC you have to be gay, black AND/OR a woman 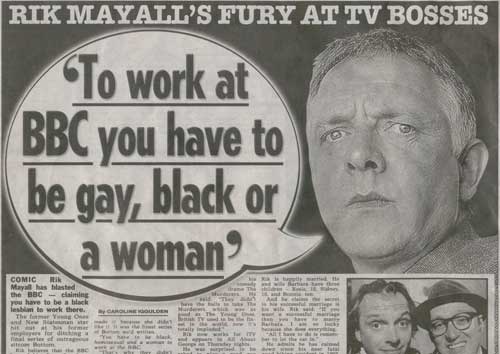 And thus with one quote in The Sun Rik Mayall finally disabuses me of the notion that I was going to somehow leap from my current new media world into the murky world of TV. *Sigh*.

Just one thing though - the quote in the article is "You have to be black, homosexual and a woman to work at the BBC" yet the headline is "To work at BBC you have to be gay, black or a woman". Maybe it is just the advanced search nerd in me, but surely the difference between AND/OR in those sentences changes the meaning considerably?

I wonder how Rik managed to work on more than one show for the BBC for all those years, being none of the above? The Young Ones, Filthy Rich and Catflap, Bottom, Jackanory, Blackadder, Shoebox Zoo to name but a very few. And I wonder how much his comments against the BBC are due to his new (and rather pants) ITV show?

Maybe the thought of there being women who were not only black but gay as well was considered rather too much for Sun headline readers.

I COULDNT AGREE MORE! Well said rick bout time someone said something about these left wing no good pencil pushers who are nothing but ANTI ENGLISH!!!!

Um, 'X', straight white men are the wealthiest, socially dominant and politically powerful social group in the UK.
So no, everybody isn't equal yet.
These evil blacks, gays and women are still disadvantaged.
And I'm sure you're terribly sorry to hear that.

To 'Anonymous', are you saying that black people, gay people and women aren't English? What England are /you/ living in?

I love Rik.
If he wasn't around, I wouldn't be around either.
He was just angry, thats all.
He didn't mean this any harm, I don't think.