Eric Villemin started by explaining that Apple had built an impressive machine for monetising apps and music. They hadn’t been so helpful in monetisation for publishers. The 30% “Apple tax” and the fact that the relationship with the user is owned by Apple rather than the publisher were disincentives for investment, and had made many publishers think twice about throwing their lot in with Apple. He then went on to outline three different approaches that publishers had made.

The first cases study he outlined was Future’s magazine business. They had decided to put their magazines into Apple’s NewsStand, and have enjoyed some success. They put 50 titles into the shop, and in the first four days they had sold as many copies as they would expect to sell physically in a month. A year on and 40% of their customers through NewsStand have subscriptions — they are “captured”. In cash terms it has meant an uplift in sales of around £500,000 for the business, although I wasn’t sure whether that was gross sales or after Apple have taken their pound of virtual publishing flesh. Significantly they had been able to grow their market for specialist magazines outside of the UK. Eric said that Future had essentially gone from having a declining print business in the UK, to having an expanding international market. He wondered what French publishers could do to tap into the ability to sell titles overseas.

Next up was a case study of the Financial Times story — one I’ve blogged about before. The Financial Times decided that the direct relationship with their subscribers was more important than the marketing presence of being in the app store, and so terminated their iOS app and replaced it with a pure HTML5 web app. It has been a great success for them, although other publishers thinking of going down that route need to bear in mind that the FT’s unique premise of giving their subscribers information that will help them make money is difficult to replicate. Eric noted that this technology was deemed so important to the FT that they ended up acquiring the development company that had built it for them.

The last story that Eric told is perhaps the one most unfamiliar to British shores. It was only a few weeks ago that I was in Frankfurt at the World Publishing Expo watching Philippe Jannet talk about ePresse. This is a concerted effort by French publishers to produce their own viable alternative to Apple and Amazon, with a standalone cross-platform sales channel for newspapers and magazines.

Eric was talking about the next stage in the story — that they have released an ePresse app for iOS. It might seem an odd step, and certainly he suggested that ePresse hadn’t been sure at all that Apple would approve the app, since it ran counter to their usual business practices with publishers. Eric said that readers are no longer faithful to one newspaper or magazine, and ePresse reflects that by offering bundles, allowing users to dip into a range of related titles at discount prices.

Eric Villemin, who is a digital media consultant, was speaking as part of an overall WAN-IFRA event called “Les Victoires de la Presse”. The evening gala saw ePresse win a special jury prize, and other French and Francophone media organisations win prizes for things like technical and editorial innovation, and scoop of the year — a story about abortions in Morocco. In the case of La Gazette from Senegal, there was an award which made for a sobering reminder of the battle for press freedom in many parts of Africa.

The dinner took place in Paul Bocuse’s famous circus-themed L’Abbaye de Collonges restaurant, which was quite an experience as the only native English-speaker in the audience. It really was a great honour to be invited and involved, and I’d like to extend thanks to all the lovely people who invited me over and helped me in Lyon, especially David Sallinen of WAN-IFRA, and Emmanuelle Sysoyev of Only Lyon. 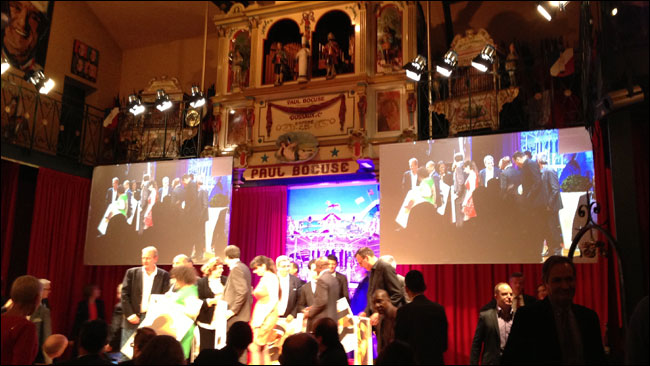 Winners on stage at the end of the award ceremony

Interesting, as was your blog talk from this event. But where is Friday roundup? Are you not doing it anymore? I'm not in news or usability but I'm interested in both and I find your weekly edit usually contains at least a couple of articles I want to read. So I miss it when it's not in my inbox.

Hi Kylie, I stopped doing the Friday Reading post in the run-up to Xmas as part of winding down. I’ll start it again, or something like it, in the New Year.