The ups and down of Facebook Social Reader traffic

There has been quite some hoo-ha on the web suggesting that Facebook “Social Reader” apps are dying, based on a piece written by BuzzFeed’s John Herrman - “Facebook social readers are all collapsing”

It starred this rather dramatic looking graph of Daily Active Users to the Guardian’s Facebook app over the last thirty days: 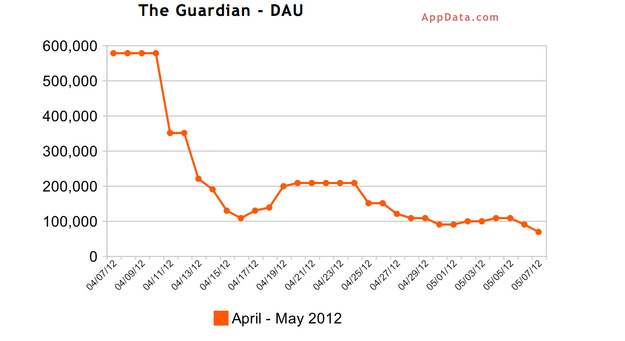 Daily Active Users to the Guardian Facebook app, as shown on BuzzFeed

TechCrunch have a different angle, and of all the outlets who have subsequently written the story up they seem to have done the most actual journalism to stand the story up: “Decline of reader apps likely due to news feed changes, shows Facebook controls the traffic faucet”

Notably they looked a bit to the left of that dramatic graph, which gives a slightly different picture

Daily Active Users to the Guardian Facebook app, as shown on TechCrunch

It isn’t that the BuzzFeed graph isn’t true - we certainly do have less users at the moment than we did in April. It is just that in April we’d seen an abnormally high number from a massive spike, a context which isn’t reflected if you only look back thirty days.

The BuzzFeed story played happily into a narrative where a lot of tech commentators have criticised the social reader apps, which seems to have blinded some of them to actually digging a bit further into the numbers behind this particularly story. One of the charts BuzzFeed published showed Angry Birds and Draw Something also lost huge numbers of users, but nobody today is writing off “social gaming”.

Brittany Darwell has also written about the data for Inside Facebook - “Data shows social readers have mixed results, but aren’t ‘collapsing’”. She states:

“We looked at 12 media sites and apps that integrate Open Graph to allow users to automatically share their reading and viewing activity with friends, and have concluded there is no single trend affecting these apps the same way.
...
It is also worth noting that the dramatic changes in some apps’ numbers around April 10 are related to the fact that Facebook did not return MAU data for a period of five days leading up to that date. As such, the growth or decline appears more suddenly than if the graphs included growth for those five days prior.”

The fact is that if there is one thing I’ve learned from looking at Facebook traffic data, it is that it swings wildly. I mentioned in my talk about the app at news:rewired back in February that Facebook traffic simply doesn’t seem to follow the normal “news curve” that publishers are used to. In the way we have currently implemented our app it is almost entirely driven by peer-to-peer action within Facebook, and the viral distribution of Open Graph content works a bit like compound interest. Any break in the viral loop sparks a decline that takes a while to recover from, whereas any really popular individual story gaining viral traction can send the graphs soaring. And on those occasions we’ve even seen referral traffic from Facebook momentarily eclipse referral traffic from Google.

Finally, if you can bear to read one more thing about Facebook today, Patrick Smith has written an excellent piece on a related topic - “Facebook as editorial opportunity and commercial threat to publishers”

Disclaimer: This is my personal blog. The views expressed are my own, and do not reflect the views of Guardian News and Media Limited, or any current or former employers or clients. Read my blogging principles.

Read other recent posts about: Facebook, Social media, The Guardian

Perhaps not written off entirely, but the decline of social gaming was certainly picked up on by Wired