In September last year the Guardian launched our Facebook app as one of the media partners working on new features announced at the company’s f8 conference. The app uses the Open Graph to implement “frictionless sharing”, where the act of reading an article automatically pushes it as an action into Facebook’s database.

Several of us at the Guardian - including colleagues Meg Pickard and Dan Catt - had thought for some time about what a “social news experience” might be like, but when we came to build the app we concentrated on shifting one particular metric. We knew that 77% of visits to the Guardian from facebook.com only lasted for one page. A good hypothesis for this was that leaving the confines of Facebook to visit another site was an interruption to a Facebook session, rather than a decision to go off and browse another site. We began to wonder what it would be like if you could visit the Guardian whilst still within Facebook, signed in, chatting and sharing with your friends. Within that environment could we show users a selection of other content that would appeal to them, and tempt them to stay with our content a little bit longer, even if they weren’t on our domain.

When we launched the app, some people were quizzical about the approach.

Christine Burns said in two tweets: “The Guardian are going the right way to kill off normal social exchange of references to their articles. Almost as bad as Times paywall. The Guardian has been pretty sure footed with social media until now, but their Facebook integration is a fundamentally illiberal mistake”

Jason Cartwright tweeted: “The whole thing is weird - why would you cede control of the distribution to FB? Feels like old AOL walled garden model”

And @Playwert got straight to the point...

A new audience for our journalism

One of the reasons we did the app was the relative audience sizes. The Guardian reaches 60m people digitally, and Facebook reaches 800m people. Which means there are at least 740m on there who could be reading our journalism but aren’t. That is a massive opportunity.

So far nearly 6 million people have signed up and installed the app, and one of the most exciting things is the demographic profile of those users. Over 54% of them are 24 and under, and 15% of them are between the ages of 13 and 17.

Demographic make-up of users of the Guardian’s Facebook app

This is a demographic that it is incredibly difficult for news organisations to reach. The app is putting our reporting and features in front of the grown-up audience of the future. Ken Doctor described Facebook as “a potential hothouse of new, younger customers.”

The younger demographic means that content that appeals to them become popular in the app. Some of the most read stories have been about the X-Factor, and I’ve seen some tweets suggesting that represents a “dumbing down” of the Guardian. To my mind, if we are producing that content anyway - which we do - then why wouldn’t we want it to reach as wide an audience as possible. We’ve also noted that stories about students or stories about Facebook prove to be very popular amongst students using Facebook.

How does the app work?

Our Facebook app is an opt-in alternative way to read our content. We don’t specifically edit it or choose which articles appear. It is entirely driven by user actions, and we were able to build it because of the Guardian’s Open Platform API. Any article, video, photo gallery, podcast or audio clip available in the API can appear in the app. Any link to the Guardian that appears within Facebook is a gateway into the app, whether posted on one of our on Facebook pages, or organically shared by someone pressing the Facebook share button on our site.

When a user clicks on a link to guardian.co.uk, we offer them the chance to try the app. This is in much the same way as when we detect the referral has come from a mobile device we redirect the user to m.guardian.co.uk. If the user declines the app, we take them through to guardian.co.uk as normal, and set a cookie so as to try not to ask them again. If they say yes, they read the article in the app environment, and that action is shared with their friends.

This has proved to be a divisive, and there has been some strong criticism of the social reading apps from people like Molly Wood - “How Facebook is ruining sharing” - and Kevin Anderson, who wrote “Why Facebook’s new reading apps are so darned annoying.”

We knew that this was going to be the case, as my colleague Karen Loasby user tested a prototype in advance. Half of those tested recoiled in horror at the very idea, and said that basically they never installed any apps on Facebook. The other half seemed completely unfazed, and even sometimes a little perplexed when she was suggesting to them that just maybe they should be a little more concerned about their privacy settings on Facebook.

One effect of this has been that old content has resurfaced by the app, and gained a whole new lease of life. Someone shares an old article with their friends, some of their friends either already use or install the app, and the viral effect begins to take hold. A piece from 2009 headlined “Too fat to be a model? The picture that caused a storm in the fashion world” about reaction to a picture of Lizzie Miller in an edition of Glamour has been viewed over 650,000 times in the app. It has generated over 1,000 new comments on Facebook, and some of those comments themselves have generated nearly 1,500 “Likes”.

This article has been a phenomenal success in the app

I’m comfortable with stories like that getting audience attention. The story itself might be from 2009, but it isn’t as if the debate about the size of the models used by the fashion industry was done and dusted a couple of years ago. Our archive content, presented in a social environment, has sparked a contemporary conversation. And if you’ve got a brilliant feature about the Rolling Stones discussing fifty years of their career, it will always be a brilliant feature about them at this stage of their lives, whether you read it in two weeks, two months, or twenty years time.

We’ve got over 1.3 million articles live on the website, so that is a lot of content to be discovered, and the app means that suddenly any page, languishing unloved in our database, can become a new landing page. When an article becomes popular in the app, we sometimes package it with content. Because we know the attention has come at a specific time from a specific place, we can add related links that are appropriate to the audience rather than to the original content.

For example, a piece about Derren Brown spread virally because of the headline just around Halloween. We packaged it with other spooky and paranormal pieces that had been popular in the app around that time. It looks a little incongruous now, this 400 word 2003 piece that everybody had forgotten we ever published, splashed with content about Halloween from 2011, but when you’ve got the audience there, you need to optimise for them. 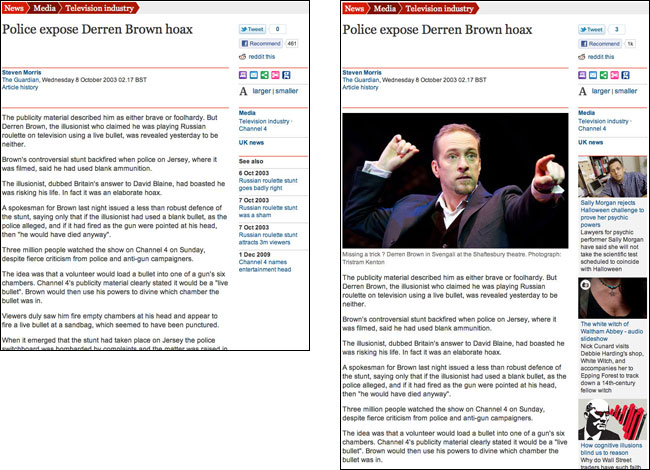 This 2003 article has been repackaged now it is a landing page on guardian.co.uk

We’ve made continuous changes to the design. Some tweaks are small - for example pulling the dateline up above the headline to try and make it clearer for users when they are reading archive material. And in the last few weeks we have added photo galleries, video and audio into the app. We’ve just revamped the homepage to showcase these new types of content.

And it isn’t all old stories or X-Factor gossip that is getting read and shared. A Jonathan Jones piece “The meaning of 9/11’s most controversial photo” has had more than three-quarter of a million views in the app, and other immensely popular pieces from the last few months have included Naomi Wolf writing about Occupy, a piece about twins with different skin colour and the arrest of a woman accused of a racist outburst on a South London tram. 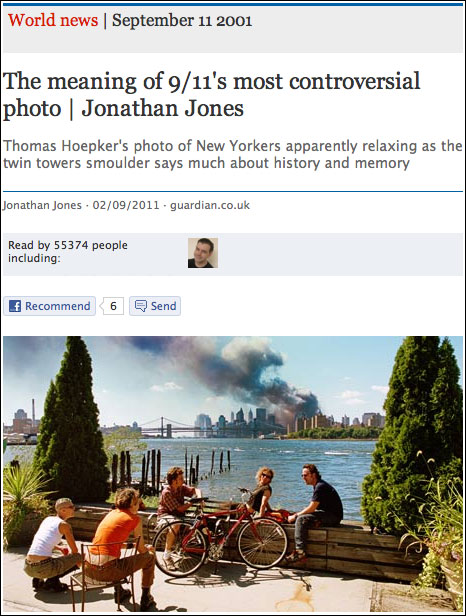 The Guardian Facebook app is a canvas app. That means the bulk of the page is served by us within an iFrame on the Facebook domain. All the revenue from advertising served in that area of the page is ours, and for launch we engaged a sponsor to take the full inventory across the app. Facebook earn the revenue from advertising placed around the edges of the page. The app is growing us audience in a new space, and as those people use the app, they also promote our content to all of their friends, who, even if they decline to try the app, often still end up on our website.

Facebook have invested heavily on the Open Graph and their new timeline feature. They see this as the future of their platform.

In effect, once we push an action into the Open Graph, we hand the responsibility for the UI and presence of our content within that environment over to them. One of the criticism’s of the new “frictionless sharing” has been that a few companies are dominating people’s news feeds. As more and more apps start to use the feature, this effect will diminish.

The “frictionless share” comes in at the bottom of a hierarchy of activity, where a “Like” and a “Comment” are still much stronger signals of activity. The Guardian actions of reading, watching and listening are pretty conservative - I’m sure that in time you will see that friends playing games will be frictionlessly sharing that they just harvested a crop, or assassinated a mugwump. For Facebook to succeed, they will need to keep their users happy that this level of information is manageable and interesting.

For the Guardian’s part, the app will continue to iterate. We are constantly looking at ways that we can improve the social side of the app. The key to success will be surfacing the right content for the right users.