The release of 60 new apps that employ Facebook’s “frictionless sharing” has sparked another round of internet debate about the value of the functionality, and the shift to getting users activated on the site’s new Timeline design.

A poll by Sophos suggests many users are unhappy with Timeline and Philip Landau posed the question on the Guardian’s work blog: What if Facebook Timeline was read instead of your CV?.

Nick Bradbury blogged about how actually more friction is added to the sharing process, but that doesn’t seem to have stopped 5 billion song plays being shared. Whatever that means.

Predictably, Charlie Brooker’s rant about “frictionless sharing” - “I’m all for sharing, but why the online obsession with revealing every detail of your life?” - has performed very well within the Guardian’s Facebook app (which I worked on), as his content always does. Any why wouldn’t it? The “frictionless sharing” effect amplifies articles that have become popular, driving even more users to read them, and share them.

Away from the app, in the space of 24 hours, over 1,000 people have voluntarily clicked the “Recommend” button on the article when viewed on guardian.co.uk, sharing Charlie’s woes about over-sharing with their friends. And nearly four hundred people have shared their feeling in the comments about it. 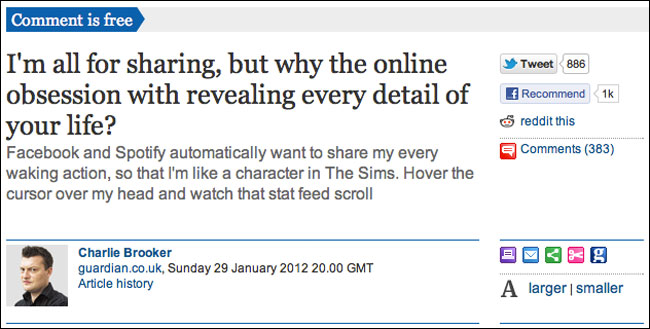 Paul Sutton wrote on Future Comms that the system represents “the Gruesome death of choice” as Facebook introduce “60 new Timeline apps that work BY DEFAULT UNLESS WE TURN THEM OFF.” His Caps Lock, not mine.

My colleague, Meg Pickard, by contrast, has written a post explaining some of the clear options around “frictionless sharing”, not least of which being that installing them is an act of choice itself - “Meg Pickard just published a blog post about frictionless sharing and Facebook.”

One issue that keeps coming up is that the presence of “frictionless shares” diminishes the value of things that have been deliberately shared. These apps push an “action” into Facebook’s data centres, and the UI of presenting that back to users is up to them. You can see that Timeline displays the two very differently. I don’t think the aim is to replace the active share, but it is to add another set of actions into Facebook’s graph - of much less value than a comment, less value than a “Like”, but of interest nevertheless.

If you are interested in finding out more about the Guardian’s Facebook app, I’ll be talking about it on Friday at news:rewired, as part of a panel session on “Social Media Optimisation” alongside Wired’s Nate Lanxon, the BBC’s Chris Hamilton, Kevin Anderson and MSN’s Darren Waters. I’ll be publishing the notes from my talk on this website on Friday.

And, talking of Facebook, I’m experimenting with a page to bring together all of my writing output from sources like this site, FUMSI and TheMediaBriefing. You can find it - and hopefully “Like” it - at facebook.com/currybet.

This is Martin Belam’s personal blog. The views expressed are my own, and do not reflect the views of Guardian News and Media Limited, or any current or former employers or clients. Read my blogging principles.

Kind of relevant to your article - I just clicked on the link in your tweet from about 6 hours ago "I think I preferred it when all my colleagues were discussing the sex problems on Twitter at the weekend http://bit.ly/zrVl5F" (very entertaining)! But then I panicked and wondered if my read of it had popped up in my Facebook feed, as while I'm liberated and all that I don't particularly want my best friends Mum seeing that I read that particular article. :P It hadn't popped up, I guess because I didn't access it via Facebook - I'm still working how all this stuff works, but the point is I could've clicked on someone elses link from their feed out of curiosity. Another liability of these frictionless shares is it requires one to have to go back and edit your world sometimes.