I’ve just come back from Poland, where I was giving the opening keynote session at the Polish IA Summit. I’ve published a list of links to the things I mentioned, an essay version of the conclusion - “Five lessons from an Information Architecture career” - and uploaded the slides. Over the course of the week I’ll be posting my notes from the rest of the sessions I saw in Warsaw.

Hubert’s talk was about the testing and development process of a game experience called TalentGame due to be distributed to schools in Poland later this year. It acts as a diagnostic tool for the aptitude of children for different types of careers. He said it would be a useful alternative to much of the careers guidance available in the country at the moment, where people are more like fortune tellers than professional careers advisors - their chief concern being to tell the parents something that they want to hear.

Their first attempts at developing the game fell completely flat when shown to children in testing sessions. They had, he said, made too many assumptions about children being childish and easily amused. Instead, research showed that even young children identified with characters like Hannah Montana and Ben 10. The game was accordingly recast away from the initial fairytale world it had been set in, and the avatars assumed by the children made more mature and aspirational. Doing user testing with 7 year olds isn’t without issues - after about 15 minutes of the session, most of the kids were bored and playing games under the table rather than paying attention to what was being asked of them.

The main learning they had was that you should always test your assumptions. Even when dealing with an audience that you know to be different from your own preferences - children - you still have to verify what you think you know about them.

Agnieszka Szóstek - “The value of collaborative design with users: a case study”

Agnieszka Szóstek’s talk was one of my favourites from the event. She was also talking about the process of building a tool to find out about the development of children, but this time using co-design. They had taken a very collaborative approach, and really thought about all the groups of users. Even though it was the children using the service, it was parents who were going to be most interested in the results, and so they included some design sessions with them.

Agnieskza and her team had thought long and hard about the problem of getting parents to open up. Of course they wanted to find out about their child’s development, but were unlikely to want to openly say “I want to find out x about my child”, as it touched deeply on their own fears and insecurities as parents. Their solution was to get them to play a variation on the folding paper “consequences” game. This allowed them to answer the question “What would you like to find out about your child’s development?” in a way that was totally anonymous even within a small focus group. Agnieskza said they had a very full discussion of the issues in the session, but not one person ever said “I wrote that”.

The reason this turned out to be so important for the project was that the requirements from the parents were quite at odds with what psychologists consider to be the important markers of child development. Parents were much more concerned about the emotional well-being and social aptitude of their children, whereas psychologists wanted a system that measured cognitive abilities. Parents even got to draw some templates of how they’d like the reports delivered to them. By taking this very collaborative approach the project was able to design based on the parental need for information they felt was important, rather than rely on what academics thought was important for them to know. 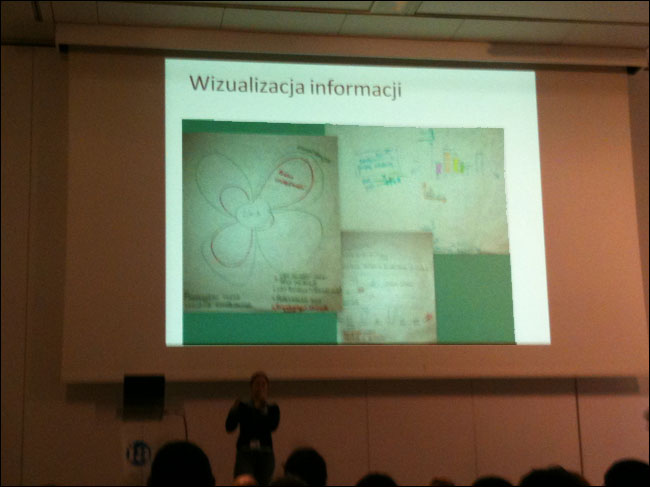 Tomorrow I’ll have my notes from the presentations by Krzysztof Trzewiczek on opening up Polish state budget data on the web, and from Tomasz Kopacz talking about how he sees the future of IT.