One of the interesting things about being back at the BBC for a couple of months contracting is seeing the exhibitions and information that is put on within BBC buildings for both visitors and staff. I got to see some technology demos which included some astonishing 3D television, and go to a session about the Doctor Who related multi-media content.

Also at Television Centre at the moment, there is a cabinet full of fascinating 'war gifts' given to the Corporation after the conclusion of World War II

The BBC enjoys a testy relationship with Britain's Armed Forces. Only a few months back a 'bad phrase' appeared to be asking people in Iraq to report on British troop movements, which some people responding to Vicky Taylor's Editors Blog on the topic considered to be High Treason.

"You are traitors. That is all." by Steve Canyon

"Treasonous or grosly incompetent? You choose, Vicky, because a little mistake it certainly aint." by towcestarian

Many people have also never forgiven the BBC for their reporting during British attacks on Goose Green, which it is claimed cost British lives during the Falklands War.

This isn't a new phenomena with the BBC. Some BBC critics claim that the Corporation was sympathetic to Hitler and the policy of appeasement in the run up to the Second World War, and that it failed to give airtime to those who were arguing for war.

As a Historian by academic trade, it is an area I am really interested in, and something I'd love to have more time to research.

It always strikes me that hindsight is a powerful thing, and I can't really conceive of a situation where the official British Government line was containment and appeasement of a foreign threat, but where the BBC would be simultaneously all out for war.

The exhibits on display in Television Centre at the moment tell a different story, a story of people in Occupied Europe who were grateful for the transmissions that the BBC played out across the continent.

Exhibits include a letter of thanks from General Dwight D Eisenhower, and a picture of General Sir Bernard Law Montgomery. The accompanying note explains the role the BBC played in the run-up to D-Day.

"In 1942, the BBC issued an appeal for postcards and photographs of the coast of Europe to the Pyrenees. Millions were sent to the War Office and, together with the aid of the French Resistance and air reconnaissance, Normandy was chosen as the target for the D-Day landings." 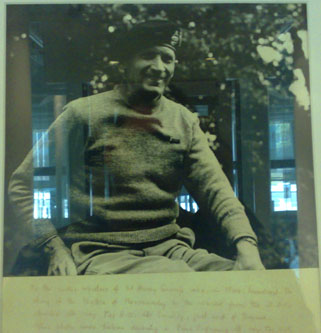 Another exhibit is a plate sent to the BBC from Holland, marked: 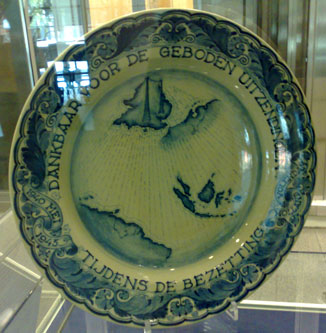 Another gift from Northern Europe on display is a vase from Denmark. It was designed by Thorkild Olsen and presented to the BBC by the state Danish broadcaster. 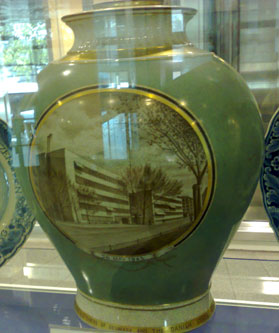 The notice on the exhibit in Television Centre claims:

"A newspaper report in the Evening Standard of December 15 1945 recorded that the vase was moulded five times and that once it was declared perfect, the original moulds were destroyed."

Proving the adage that war always profits somebody, the introductory panel to the exhibits states that:

"When war broke out in September 1939 the BBC was transmitting in seven languages. At the end of the war there were more than 40 services, and the BBC's staff had more than doubled."

It goes on to explain how the British Governement drove the expansion in key European languages. I recently read a fantastic book called "Edo Londino, Kalispera Sas" by George Angeloglou about how the Greek language service developed during this period. 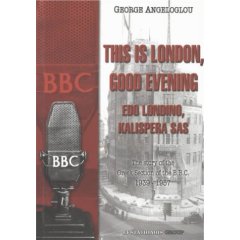 The BBC's information panel does at least acknowledge some of the perceived problems with their early coverage of World War II:

"Early in the war, the BBC's 'bland offerings' were criticised, and its impartiality questioned. However as the war progressed people on the home front and occupied countries saw the BBC as a lifeline of information. Even Hitler's high command are said to have turned to the BBC, so misleading did they find their own news broadcasts."

Thinking back to the Falklands War, at the time there was also controversy because the BBC always referred to 'British' troops, rather than 'our' troops. Those kind of semantics with language are even more complicated for the Corporation now. The worldwide nature of the internet means that what looks odd for the UK (e.g. constantly referring to 'British Prime Minister Gordon Brown', rather than just 'the PM') is essential to give context for an international audience being served exactly the same internet news content - albeit perhaps with adverts on it in the future.

One other thing that is also interesting looking back, is thinking how it wouldn't be possible for the BBC to carry out that kind of 'war footing' broadcasting anymore. The BBC has lost the ability to broadcast using directly BBC-owned transmitters, and much of the World Service relies on being relayed by willing FM partners in the territories the Foreign Office is trying to reach, rather than chucking out powerful short wave transmissions from the UK.

Deep in the bowels of Bush house is a deeply moving memorial and tribute to the BBC from the Dutch government. well worth seeking out.