The Daily Express Inheritance Tax 'Crusade' re-writes British politics. And massages the numbers in the process.

When I touched down in the UK in the early hours of this morning, I didn't realise that I had walked into a land in the grips of a political revolution.

I mean, I know there is a new PM here, and there has been some to-and-fro over the merits of a November election, but I had missed the seismic change in British politics that happened with Alistair Darling's pre-Budget announcements earlier in the week.

Fortunately, the humble Daily Express was able to set me straight this morning.

Chancellor Alistair Darling announced an immediate doubling of the threshold for the death duty to £600,000.

He also promised in future to "take both house prices and inflation into account when setting inheritance tax thresholds".

His surprise move represents a huge climbdown by Gordon Brown in the face of massive pressure from Daily Express readers.

This newspaper's crusade against the death tax – backed by more than 350,000 people – is widely seen to have transformed Britain's political landscape.

Now, both The Sun and The Telegraph have recently been campaigning for a referendum on the currently proposed EU charter / treaty / constitution / assault on British liberty [delete according to political belief]. They have at least had the decency to conduct their own petitions. 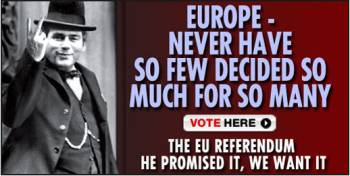 All the Daily Express seemed to do in their campaign was set up a petition on the 10 Downing Street website, and slap a logo on any article about tax. 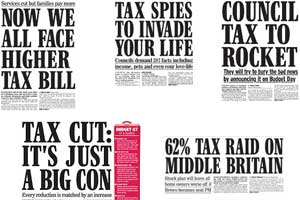 And then triumph a few months after the 2007 Budget that the Government announcing they would let couples combine their allowance was a success for their 'crusade' to abolish the hated death tax. [1]

We the undersigned petition the Prime Minister to ensure that inheritance tax is scrapped in this year's Budget. Submitted by Macer Hall of Daily Express

Does anybody, apart from the Daily Express leader writers, believe that they have just witnessed, and I quote, something that has "transformed Britain's political landscape"?

In their article today the Express claimed the 'crusade' was backed by "more than 350,000 people".

Of course, one of the things about not hosting the campaign yourself is that you can't control the publishing of the numbers yourself.

So you might think it more than a little embarrassing that the petition about Inheritance Tax that they used for this 'crusade' states that it only attracted 128,619 signatures, not the 350,000 plus that the Express claimed on today's front page.

[1] As ever, I also have to go on to personally quibble with the fact that in the 21st century the Express still seems to think 'crusade' is an appropriate word for this kind of campaigning. It is such an unpleasantly loaded term - and it isn't just the obvious Islamic groups in society who can find it uncomfortable.

The Jewish population in the Holy Land didn't do so well out of the Crusades either, and the Fourth Crusade led to the sack of the seat of Orthodox Christianity. It also led to my adopted homeland of Crete - and everybody on it - being sold into a Venetian occupation that lasted hundreds of bitterly contested years. [Return to article]