One of the biggest changes for me in shifting from the Guardian to working for my own consultancy has been in how much I can write about my work on here. The Guardian (and indeed the BBC many years before that) were mostly happy with me blogging about what I was up to there, and often actively encouraged me to write about products. With Emblem though, my work is often done under tight NDAs, and blogging about what I do feels much more like “giving away the secret sauce recipe” for free, rather than trying to publicise something I’ve worked on. One project has been very different to that, however, which is a Guardian-related project called Contributoria.

Contributoria is “a peer-based collaboration platform for storytellers”, which has been funded by the International Press Institute. Matt McAlister, Daniel Levitt and Sarah Hartley, the core team behind n0tice, are the people behind it, and in July I joined them for a week to work on some early sketches and wireframes of how the service might be realised.

The project is open source, and so we decided to open source the design process too. Last week on the Contributoria blog we published seven sets of notes from my work on the project, looking at how my thinking, sketches and deliverables developed across the week.

I am used to posting images of some of my deliverables on this blog when I’m writing about projects I’m working on - but not normally in advance of them being built, so it was a novel exercise for me. I probably spent more time wandering around and thinking about the challenges and problems than I did actual drawing. To be honest, by the time I’d finished on that phase of the project, although I’d established some broad interaction patterns and a good idea of the site architecture, I hadn’t got as far as I’d hoped. I also ended up having an amazing discussion with Matt on the last afternoon I was working on it, where we basically tore down the whole premise and came up with a completely different distributed vision of how the service might work. I’ll be very interested to see how the project subsequently shapes up.

These links come with a health warning then - this isn’t the most coherent set of writing or the most complete set of deliverables I’ve ever produced, but it does give some insight into my early stage thinking on the project. And, since it is open source, if you are interested in participating, please get in touch with the team. 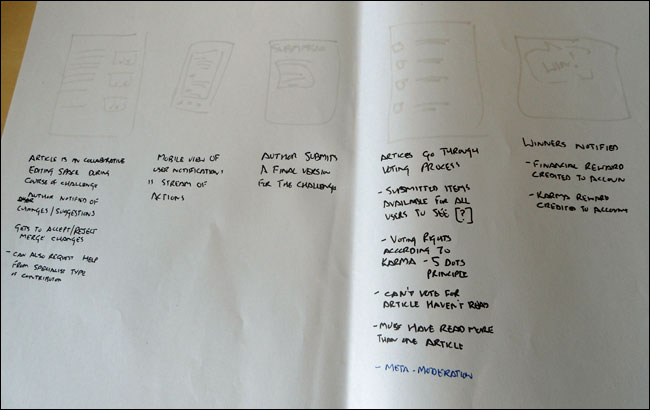 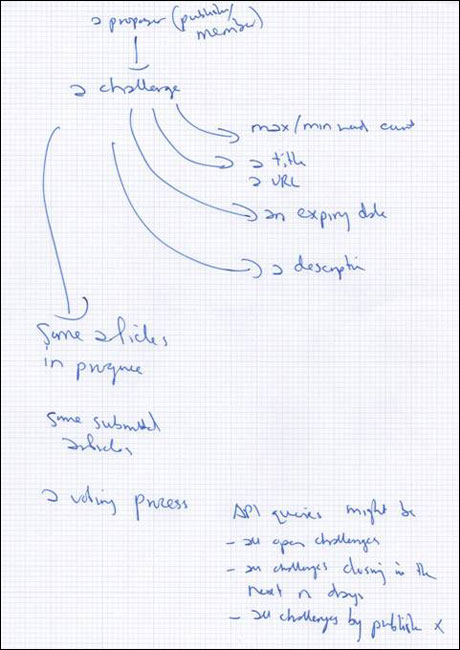 Some of my sketches from the Contributoria project