The main reason for going over to Denver for the IA Summit was that Matthew Solle, Eric Reiss, Joe Sokohl and I were doing a panel session on “UX communities: Starting from the beginning”. Matthew has blogged his round-up of the main points. 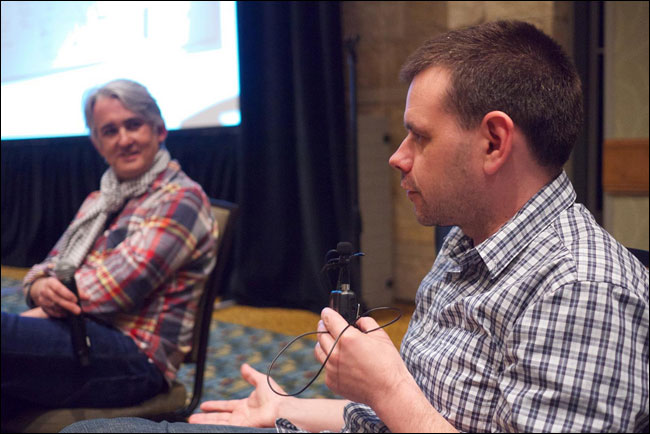 I hope that it made a nice change of pace from the rest of the programme, and one thing that we were desperate to avoid was the cliche of four white men sitting behind microphones at a table on a stage. Instead, we got off the stage and set the chairs in a circle so that we had an audience of around forty people, in something that I hope was much closer to a conversation than a series of set-piece speeches.

A show of hands from the audience suggested that the majority of people were already involved in local UX communities to some extent, and we were really pleased to see that at the end of the session, most people seemed to break into little huddles to talk, rather than breaking out of the room to go and do something else. Hopefully we got some good conversations started and helped people make connections.

I did worry that maybe we hadn’t been clear enough about giving some concrete positive steps that you can take to help improve community. If I’d been going to put bullet points up on a screen, I’d have said:

There were some good points from the audience. One was about whether, after you grow to a certain size, actually it is better to affiliate and become a chapter of an existing organisation. It isn’t something that I could see us doing with London IA, but I can see how it would have certain advantages, especially if you only have a small set of volunteers running the group and little support.

Another, perhaps slightly US-centric suggestion, was that the Florida group having trouble getting people to talk should approach guest speakers from New Hampshire during the winter. If they are freelance, it would give them the chance to grab some sun, and write the trip off for tax as well :-)

And we had our own learnings for running a session in that format. In the future I think I would: 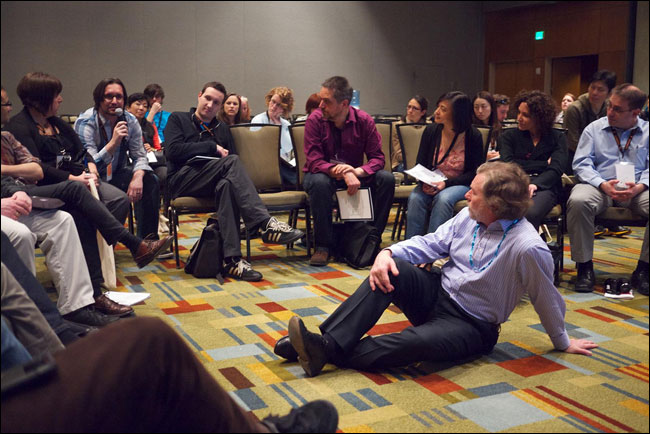 If you want to find out more about the background to the session, then Matthew and I wrote a series of blog posts as a conversation between us as our preparation. There were seven in all, starting with Matthew, and they take in some of the themes we mentioned in Denver, like “outsiders”, professional development, scarcity, job networks and no rules.

This is one of a series of blog posts debating “UX Communities: Starting from the beginning” in the run-up to a panel session of the same name at the 2011 IA Summit in Denver.

Thanks for the write-up Martin, I was keen to see some of the comments come out of this session. 'Community' and the need for it was a sub-thread running through IAS11. Indeed in the discussion about the Summit's future, several people thought that the community aspect was the main draw of that conference itself; to put it perhaps unkindly, they came for the group hugs.

I've yet to be sold on the merit of this. Admittedly, I'm an outsider and a relative newcomer to raising my head over the parapet. I'm also not a natural joiner (that's why you'll always find me in the kitchen at parties) so I struggle to see the inherent benefit of feeling part of a community. It's the same trouble I have with professional bodies like the IAI; I'm happily getting on with my job, largely oblivious of their existence, so what's the point? What value are they adding?

Perhaps the simple answer is that it's not for me. But like Mulder, I want to believe. Maybe I'm alone in needing this, but I'd like to be sold on the merits of being part of a community at all, and then having grokked the point of it, be enticed by the regular infusion of substance.

Am I overthinking it? Are they really just booze-fuelled bitchfests? :)