A few people recently have asked me “the secret” of my prolific blogging output, which includes not just currybetdotnet but the occasional foray into guest commentary for sites like journalism.co.uk and The Media Briefing, as well as regular contributions to the Inside Guardian.co.uk and Guardian Developer blogs. Indeed, Cennydd Bowles and Matthew Solle were taunting me about it while they were at the recent UX writing retreat.

"Two blog posts in one morning - a new record!" "Nah, I bet @currybet has done four..."less than a minute ago via Twitter for Mac


Part of this is just due to the fact that I’ve always written quickly, and years of practice now mean that I can get my thoughts out very fast. I’ve also got adept at writing up notes when I’m at talks or events that can rapidly be re-purposed into a blog post.

I used to be quite meticulous about having a publishing schedule in a spreadsheet with monthly topics and themes decided in advance. Blogging is much more ad hoc for me now, although it turns out that I am in such a rhythm that I still seem to publish daily without having to plan for it.

In recent months this has partly been due to the transformational impact of the iPad and the iA Writer app.

Although a lot of people have argued that the iPad is a “lean back” consumption device, I've found that this particular app on that particular device has increased my productivity considerably. Balanced on my knees on my daily commute I find that I can easily hammer out 750 words in 20 minutes, which goes a long way towards keeping the blog ticking over. 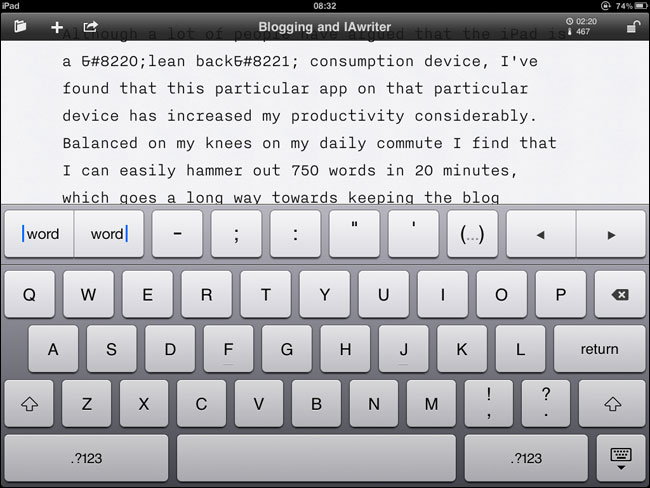 iA Writer essentially turns nearly the whole iPad screen into a giant typewriter, and is nearly perfect. Mindful of Oliver's recent tweet about people asking for features in a low-cost app, I'd have to say that I'd happily pay for an upgrade that just made it slightly easier to add a tiny bit of mark-up into a document. Not much, just the odd <em>, <strong>, <blockquote>, and I’d rather not have had to learn how to put curly quotes into a document via obscure entities like &#8220; and &#8221;.

"I've seen your app on the web. If you change this&this&this I'll spend the 0.99 it costs." - "Yeah, we're working in shifts to please you."less than a minute ago via Twitter for iPhone


Or maybe I just need to learn Markdown.

Combining Writer with Dropbox means that I have a synched up version of what I’ve been writing underground on my laptop. It means I can usually take what I’ve written on the tube and have it live on currybetdotnet within about 5 minutes of arriving at Kings Place.

I would worry that this has diminished my down-time away from a screen, but prior to that I was addicted to Angry Birds, so it wasn’t exactly like I was resting my retinas anyway!

Probably worth reiterating the disclaimer at this point: I'm Lead User Experience & Information Architect at The Guardian, but the views expressed on currybetdotnet are my own, and do not reflect the views of Guardian News and Media Limited, or any current or former employers or clients. Find out about me and my personal blogging principles.

I was typing away on a Psion 5 a decade ago when commuting to write up web content and would then download it over a cable the next day when back at work.

Due to the small keypad, I became very adept at typing with the tips of my fingernails, and still do that on my qwerty based mobile phones.

Ironically, that finger tip typing is fairly incompatible with the way touchscreens like to work, so I am having a nightmare of a time trying to get used to their preference for a flat finger tap.

Markdown is great. I don’t know of iA Writer lets you type the necessary characters (stars or underscore, square brackets), though. Regarding curly quotes, iA writes: “We disabled smart quotes to keep you focused on what you say and not how you type. The suggestion to get rid of smart quotes is not a nerd’s wish, it came from a grandmaster of type, Erik Spiekermann.” I suggest you type straight quotes and use a filter such as SmartyPants later on.

Very happy writer is working out so well for you. As for formatting options: Big changes are coming in a couple of weeks after we launched Writer for OSX (mostly adaptions of the desktop version back to iPad. But I can't go into the specifics without ruining the aha-(or as I hope wow-)effect. ;-)

You'd be surprised that you already know Markdown. That is part of what is good about it. Just using it for bold and italic and hyperlinks is golden. You can also use blocks of HTML within Markdown.

There are PHP Markdown and Smartypants libraries. Smartypants will fix the primes you're using instead of apostrophes also.

The lack of curly quotes is my least favorite iA Writer feature. I think they should have asked a writer about it instead of a typographer. Why have brackets in that case? Why not just use a pipe to open and close parentheses and fix them later? The primes and double primes are bugs, pure and simple.

I use lsquo, ldquo, rsquo and rdquo for curly left and right single and quotes respectively..

What a very nice article. I know this is not much, but as a musician with a “struggling wannabe a writer” attitude, Ipad is one of the best to write your ideas on the fly. I have just included a “garageband” app on my Ipad and was looking for another app that can accommodate my “writing” needs. Well I got a quick review from your post. Thanks!