When did the word "weblog" first appear in The Guardian?

Over the last couple of days I’ve been posting my notes from a couple of sessions at The Guardian where Matt Wells and Andrew Sparrow were talking about how we do blogging on the site. There was some debate about unearthing the first live blogs, where the Edinburgh G8 summit, the 7/7 London bombings, and the fate of Shambo were touted as candidates. Matt also pointed to Leo Hickman’s claim to have been the first blogger on Guardian Unlimited. Neil McIntosh has subsequently directed me to minute-by-minute coverage of Inter vs Manchester United in March 1999. It all prompted me to delve into our digital archive to find the first reference to “weblogs” in print in either The Guardian or The Observer.

It looks like the first mention of the format was in a column called “The search engine” in October 1998. Billed as “The Guardian New Media Department’s web picks”, a write-up of John Barger’s “Robot wisdom” site mentions that:

“The real gem is the weblog, a daily account of John’s travels around the web. Watch a highly observant and thoughtful surfer at work” 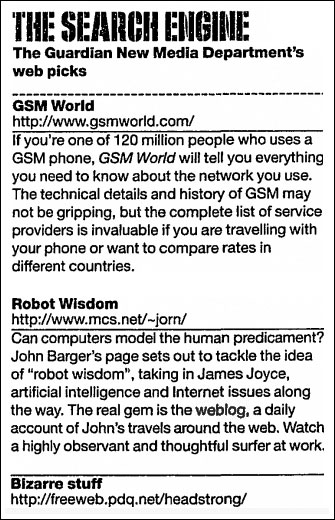 The first mention of “weblog” that I can find in The Guardian & Observer’s digital archive.

It was a few months before the word “weblog” appeared again, in a piece puntastically headlined “Easy as falling off a weblog” in June 1999. 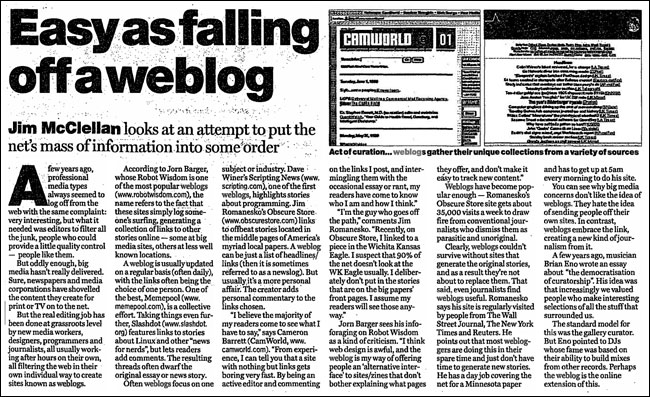 Jim McClelland writes about weblogs in The Guardian in June 1999.

Jim McClellan’s article is great to look at nearly eleven years on, not least because it seems to encapsulate all of the arguments about bloggers vs mainstream news media that some people seem to still be having today. Namechecking Robot Wisdom, Dave Winer’s Scripting News, Slashdot, Memepool, Romanesko’s Obscure Store and Cameron Barrett’s CamWorld, the article mentions resentment from journalists that these types of sites are parasites on their content and don’t generate their own stories. Interestingly, Jim Romanesko seemed at pains to point out to McClellan that the blog was something very distinct from his full-time job of covering the web for a Minnesota paper, and which he got up at 5am to do in his own spare time.

At this point in time, as old as my blog is, my first currybetdotnet post was still three years away, but a third mention of “weblogs” crept into the paper in December 1999, in a small piece authored by Jack Schofield. Amongst a list of useful resources under the heading “Web working” he suggested Groksoup as a DIY weblog platform. Other things making the list in 1999 included MSN Messenger, proto-RSS-reader/scraper software Spyonit.com, and an obscure new search engine with a silly name that could be found at google.com. 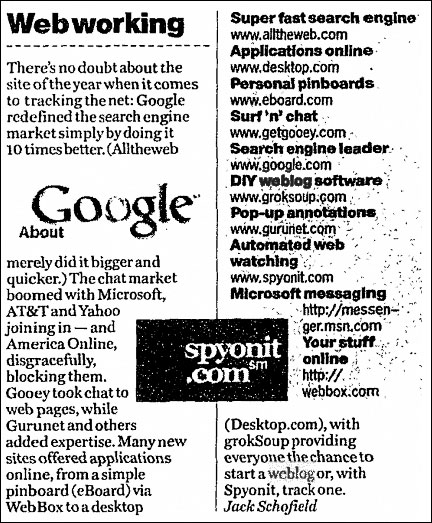 Read other recent posts about: Blogging, The Guardian

Nice bit of web archaeology there. Actually, liveblogging at Guardian goes much further back than the 2005 G8 or London bombings. As your piece, and Neil McIntosh's Twitter feed, said, it was an invention on the Sportsdesk, initially labeled as a "minute by minute."

But on the politics desk (I was political correspondent at GU 2001-2007) we liveblogged election night 2001 - you can see it here:

Okay, it looks pretty basic now - but this was 10 years ago. I remember Rusbridger swinging by the top floor of Ray Street at about 2am and being quite impressed with it.

We then liveblogged all PMQs from 2001 onwards (albeit the technology wasn't up to much, so we had to insert our own "timestamps"), plus all Blair's monthly press conferences, and even the marathon select committee grillings of the PM, twice a year.
What we didn't do, which happens now, is treat the whole day as one rolling liveblog.

I reported on the European Social Forum in Paris as a blog in 2003 - as there were few concrete stories coming out of it, this seemed the best way of covering a diffuse event. Not sure if that was the first proper day-long/event-long "liveblog" but it was certainly pioneering at the time.
http://www.guardian.co.uk/politics/2003/nov/17/greenpolitics.uk

By the time of the 2005 general election, we were basically trying to invent Twitter before most places even had wifi - I remember liveblogging each morning the pre-dawn press conferences of the LibDems, Labour and Tories, with a laptop, plus bluetooth, plus brick-sized mobile phone - with frequent cutouts. Nobody else but the Guardian was doing liveblogging politics at this point - not even the BBC.

Hope that helps. It all seems steam-age now, yet it's only five or six years ago. Twitter was really the breakthrough, I think, which went mainstream just after I left unfortunately.