No more 'us and them': Part 2 - Participatory journalism

This is part two of a series of blog posts based on a presentation I gave at the UK UPA's World Usability Day event in London in November 2010. The theme of World Usability Day was 'communication', and so I took the opportunity to look at how digital communication in the last twenty years has transformed the relationship between media companies and their audience. You can start at part one, view the original slides, or download the whole series as a printable PDF.

In yesterday's part one of this series, I finished by quoting Clay Shirky, talking about how 'the shock of inclusion' means that:

"the former audience is becoming increasingly intertwined with all aspects of news, as sources who can go public on their own, as groups that can both create and comb through data in ways the professionals can't, as disseminators and syndicators and users of the news. This shock of inclusion is coming from the outside in." - Clay Shirky: "The Shock of Inclusion and New Roles for News in the Fabric of Society"

However at the Guardian we have been demonstrating how this change doesn't have to be driven from the outside, but can be championed in a way that 'mutualises' our journalism.

For example, 'The Blair Mystery' was an attempt to unravel the byzantine financial affairs of the British ex-Prime Minister. Within the building we knew we didn't have the forensic accounting skills required to unpick the finer details, but we also knew that somebody in our audience would have the expertise and motivation to attempt it, if we published the documents. 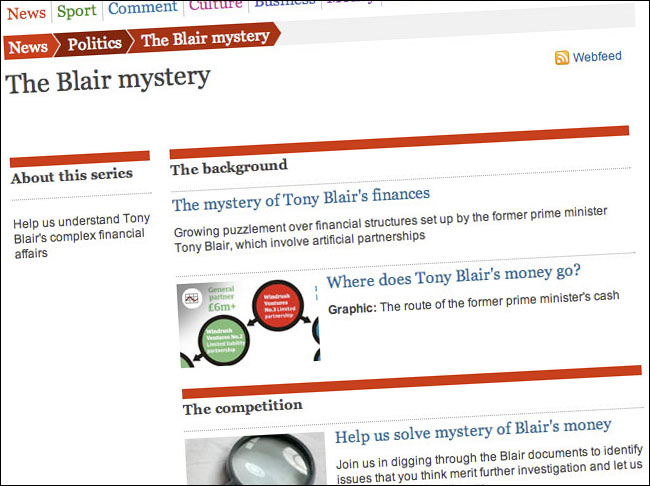 Similarly we used our audience to scrutinise the documents about MPs Expenses that were released to the public. They covered the ground much faster than our journalists could alone. In a second iteration we included more 'game-like' features, breaking the documents down into smaller tasks. This meant that the readers participating could really see the progress they were making in getting the task done. 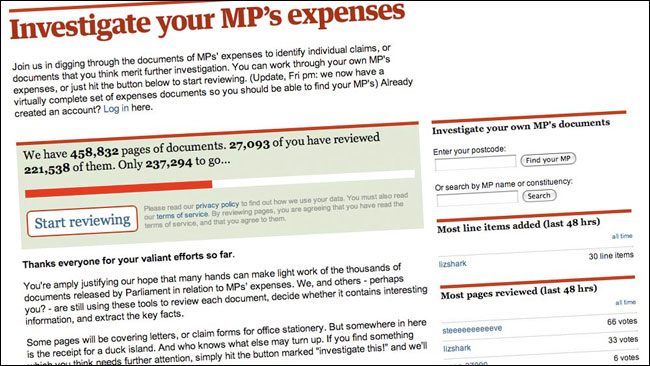 The Guardian's MPs Expenses crowd-sourced scrutiny of the documents

In another exercise, we also 'crowd-sourced' solutions to the ecological disaster caused by the BP oil spill in the Gulf of Mexico. That isn't as glib as it at first sounds. A vast majority of the submissions came from people who were experienced in drilling or in the oil industry, and it gave our team a real insight into how fellow professionals felt BP were handling the crisis.

One of the obvious manifestations of this new communications landscape is the appearance of comments from readers underneath articles on a wide range of news sites. It was once the case that to reply to a newspaper article you had to put pen to paper, and post your missive off to the paper's office. Then you might be picked out of the post bag to appear in the 'Letters to the editor' page, where your response would not only be divorced from the article it was about, but from the entire edition that the original had appeared in.

I have to be honest, and say that your mileage may vary with comments underneath newspaper articles. There isn't much added to a news article by having "I can't believe you get paid to write this" underneath it, and Marina Hyde once artfully put down those users who post comments professing the subject of an article is of no interest to them:

"As for those 'never heard of him' comments, I must say I do always rather wonder after the point of people who regard that type of statement as any kind of comment at all. Thank heavens it never happens on the Sportblog - we could probably all live without people logging in to post comments like 'Kaka - never heard of him' or 'who is Arsene Wenger?' in the mistaken belief that they're being arch."

Several organisations have wrestled with how to improve the quality of news discourse. In the States, the Sun Chronicle started charging people a dollar for the privilege of leaving a comment. The Independent moved to insisting users stick to real identities from other social services, and Sky News have given up on their message boards all together.

But I think user comments add something special to news sites, and I miss them when they are not there.

And they can help develop a story. Paul Bradshaw noted that with data-driven stories, contributions in the comments can improve the way that statistics are interpreted and the numbers visualised. At a recent Guardian event about datajournalism, David McCandless said that a legion of 'angry people on the internet' keep him honest.

And they can add powerful anecdotes that help an argument to resonate.

Whenever people tell me that debate on news sites would be improved if people were forced to use real names, I direct them to this comment:

"I was raped by someone with a rich powerful politically connected relative and I was terrified to report for fear of it getting into the papers and being accused of slandering the family. It took 3 months to pluck up the courage to do so, by which time the forensic evidence was gone. Despite my attacker confessing multiple attacks to me, he wasn't even formally questioned and remains free to attack at will, no doubt bolstered by the feeling of 'having got away with it'. If I had been confident that the details wouldn't have got into the press, I would have reported immediately and who knows? He might have been punished and I would have been saved some of the extra stress and fear I suffered."

Gherkingirl added powerful personal testimony to the debate on anonymity around rape accusations in a way that would never have happened if we'd insisted on linking it to her Facebook account.

The discussions underneath news articles can sometimes not be for the faint-hearted. In the next part of this series I'll look at how the Guardian has openly discussed moderation, and has public policies for journalists engaging in replying to comments and publishing 'social media'.

I love taking part in online debates through comments on media sites; in most cases you get a much better feel for the story than what the journalist intended, it also makes me feel much more connected to the story; taking the comments too seriously though can be a danger since I doubt those commenting actually represent a broad spectrum of the population.

We strongly believe that the future of journalism is different from what it is now.
There will be a higher percentage of citizen journalism that covers events and affairs that are not mainstream.
As important as the old newspapers and news organizations are, it is always somehow "censored" this way.
We @ the Big City Informer cover local news from the big cities and metro areas all over the world and hope (of course) that the local news gets much stronger and readers are more interested to read AND write about the things that happen in their backyard and on their street.

That's really interesting, I haven't seen any news sites really involve the readers like that before. On News Media websites I think that there is this increasing sense of equality & mutuality between readers & journalists (and the sense that we're all on the same side). There's a sense today that the average journalist is not much different from the average-Joe-blogger.

@Loca Loskowski - it's good to hear that you get the people involve in your news coverage. I find it more interesting when "real" people do the reporting themselves, no more big words that regular people like us do not understand. No offense to the journalists who use them. I especially like our local channel using regular Joes to deliver news from their own towns. It's fun and it's more believable that way.

Overall this article makes some good points but you really shouldn’t make such sweeping generalisations about people that post in comments sections. There are many different kinds of people from many different backgrounds who post comments. Comments sections are filled with people who want to express their opinions (government, campaign group and other organised or vested interest posters aside)just as you would hear people talking about any topic in a bar. So can you expect the quality of comments to be any higher. Journalists are mainly just expressing their opinions (propaganda aside)too but they have already been filtered by their employers and have to ensure certain standards for their editors and readers.

People posting in comments sections don’t have to worry about such things as quality. I think it is a good idea to improve the quality of comments through editing so long as it doesn’t slide down the slippery slope into unnecessary censorship (necessary censorship would be removing hate speech and profanity).

I am European living in Middle East and I know life and people here and in Europe. It is always tough for me to read comments under Middle East news section. In fact it upsets me so much that I avoid scrolling down the page. I realize that improving the quality of comments would be an extremely challenging task, but sometimes I think if moderating comments is so hard then it would be better without them for now!