It is that time of year again when I feel compelled to moan about the way that the media reports A-Level results. You know, how all the pictures are of photogenic teen girls, coupled with editorials bemoaning that boys don’t seem to have any academic success role models. And then we all write hundreds of column inches about how worthless the qualifications are, as if this generation of pupils exiting 13-odd years stuck in the education system had any sort of say over what they were taught and how they were tested.

I have spotted one article departing from that theme this year - in today’s G2, Viv Groskop discusses taking English Literature A-Level, 20 years on from when she first sat her exams. It is an interesting piece, perhaps reminding some of us that producing lengthy essays and writing non-stop for a couple of hours in controlled conditions isn’t the barrel of laughs most coverage of today’s exams makes it out to be.

(Also on an education theme in The Guardian today, Charles Arthur has a piece about the use of computers in schools, which has generated a really interesting discussion in the comments thread.)

Anyway, tradition dictates that instead of writing a whole fresh new moan - I just, in best Blue Peter style, link to a couple I’ve prepared previously... 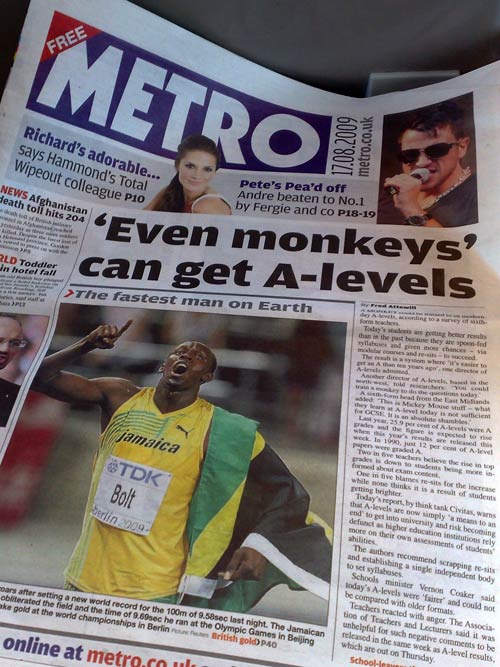 Read other recent posts about: Children and Teenagers, Media, Newspapers

The photos are always of teen girls because teen girls are the only ones who show actual emotions upon receiving their results.

A-levels are the most difficult exams on the planet, my daughter is doing hers in Hong Kong and she is having a rought time.

Clearly we think alike on the exam photos! You're welcome to enter my £50 for charity challenge on this score.

Hmm, let me see, now I have access to the guardian.co.uk production CMS... [Hatches evil 'photo-swapping when the news desk isn't looking' plan to win the £50]