Do boys even take A-Levels these days?

Time for my annual A-Level joust with the British media. There was a shot across the bows last week, but over the last couple of days I’ve been keeping a watchful eye on the way the press portrays the results process. Across print and the web it was pretty much the same old, same old - lots of pictures of very successful girls, and not a hint that boys can achieve academic success.

The Guardian, The Daily Telegraph, The Daily Express and Daily Star, and BBC News all went with images of female success without a boy pupil in sight.

Eyedropper and the team at the bbc.co.uk homepage bucked the trend with a promo picture featuring boys on the day the results came out - as did the Daily Mail. Bizarrely, though, they both used the same photograph. 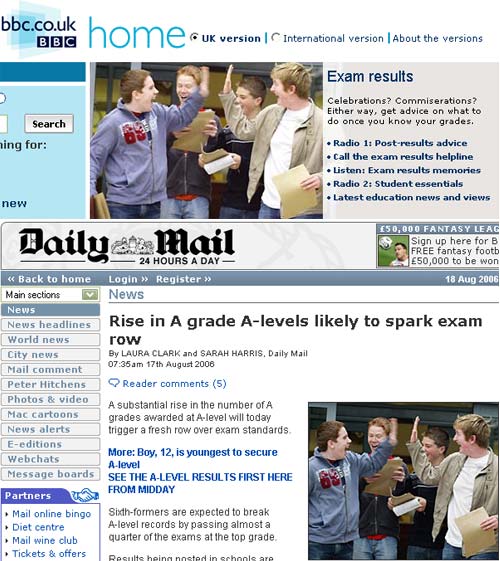 This time around there also appears to be a new twist - the D-list celebrity A-Level passing female - witness “football girlfriend” Melanie Slade on the front cover of the Metro this morning, and the near universal coverage of Lily Cole’s exam results. The Metro featured pictures of four students, besides the aforementioned Melanie and Lily there was someone called Emma and one boy - 12 year old Terence Linnell, who also was the only boy pictured in The Guardian's online coverage of the results.

The Times went one better than the Metro - its front page had five pictures of successful A-Level candidates. Three were pictures of teenage girls (including Lily Cole again), one was a picture of a female who was the oldest to pass an exam, and the sole male representative was, come on, you know the answer already, ubiquitous 12 year old maths protege Terence Linnell. 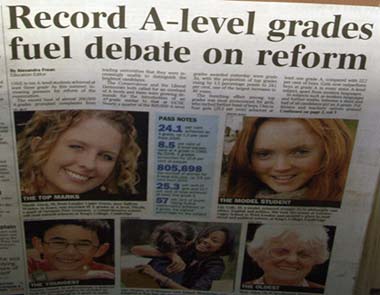 Reading the papers you’d begin to think that no teenage boys even take A-Levels, let alone pass them.

Of course, the Evening Standard sees no irony in condemning the rising pass rate driven by what they claim is a ratings culture and "everyone must win" mentality, yet simultaneously using a front page promo trying to boost sales on the basis that the paper is publishing A-Level School League Tables. The tables are not even the official ones. It is "The Evening Standard's survey of exam performance in the region, based on information supplied by hundreds of state schools", and cautions "This table is not comprehensive".

Any rise in the pass rate is naturally seen a "dumbing down". As the stupendously named Major James Buffy-Maun (Rtd) writes in the Metro today:

Doubtless the usual suspects will trot out the well-worn excuses about better teaching and brighter pupils. Let us then settle the matter by forcing a class to sit a 1980s A-level and see how they do. Not so well, I strongly suspect.

Well, this usual suspect took his exams in the 1980s, and well remembers at the time they were, guess what, easier than ever before, not a patch on what we used to learn at school in the 1960s etc etc, although it turns out my academic qualifications now suddenly seem to be hailed by all and sundry as some kind of educational golden age.

In the face of this unrelenting negative publicity, four of the exam boards felt forced to take out a full page advert in The Guardian with excerpts from this years papers to defend the achievments of the pupils.

xn+1=¼(2-sin4xn), x0=0.3 - just the kind of question that I'm sure the journalists carping on about falling academic standards do in their sleep all the time.

I think you've got this one spot on - I got my A Level results this year, and I was amazed to see that the media still keeps bringing out the old "everything's getting easier these days" argument every year without fail.

It's ironic that not one person who comes out to criticise exams for being too easy has actually sat one himself in the past 30 years. How would he know if they were getting easier?

Oh, and on the subject of only girls taking A Levels these days, maybe boys aren't half as interesting on results day :)

exams are getting easier

i'v just finished mine and its pretty obvious that if your prepared to put the effort and time in you'l do well.

theres no skill needed, you dont have to be "clever", you just have to put the work in.

A-Levels are a Joke

Oh yes because A levels are so easy that obviously all the people who struggle with them must be retards.

I don't think the A levels get easier I think maybe the subject choices are a little easier that isn't to say sociology etc. aren't difficult it's just that more people seem to be adept at those subjects.

I probably won't pass my chemistry a level not because i don't try but because i'm out of my depth. You might say maybe you were just never good at it. I was it's just a level was perhaphs a step too far.