Last week I blogged about The Guardian's "Wall of World Cup" archive display, where the information and library team had put together print outs of Manchester Guardian and Guardian coverage of World Cup finals from 1950 up to 2006. 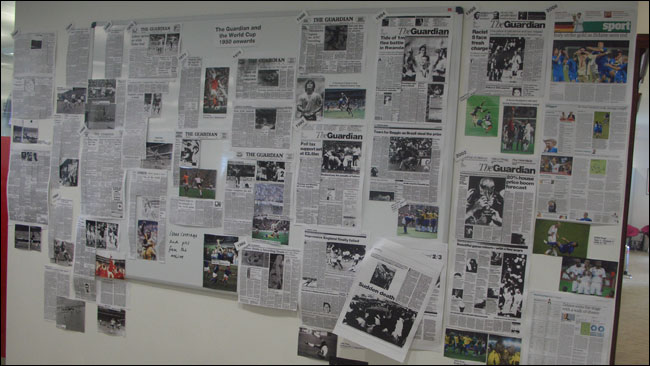 It made me wonder how easily you could do the same thing with our digital output.

You can still get a feel for what The Guardian World Cup site looked like last time around in 2006, through pages like this. 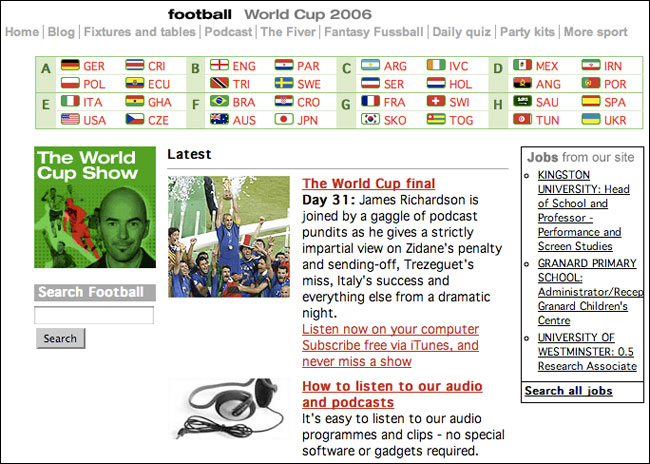 It is only a fragmentary glimpse though, as the pages generated by our old 'R1' CMS are framed in the global navigation generated by our 'R2' platform - albeit with some incorrect migration tagging that makes the system think World Cup 2006 belongs with the Champions League. 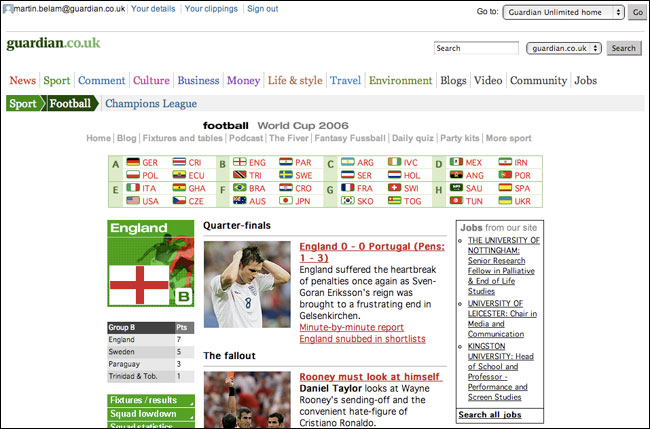 This is a marked contrast to how the print archive works. The print archive preserves the paper exactly as it is printed. Digital archives are rather more malleable than that. Since the introduction of CSS, the mantra of keeping presentation separate from content online means that it is possible to present 'old' content in 'new' templates.

It isn't just the content, but the advertising as well.

A print edition from 2006 carries advertisements from 2006, one from 1950 carries ads from 1950, complete with bad fashion and out-dated sales pitches. But, if you think about it, when you look at a web page from 4 years ago, you don't generally see ad inventory from 4 years ago. From a commercial point of view - having the ability to resell the same space on a page 4 years later - this is great news. From the point of view of a historian or archivist, this sucks.

As well as the front page of the special site, some of the World Cup blogs have been preserved (mostly) in their original format. Here is Richard Williams' "Zidane exits the stage with a walk of shame" article as it appeared online and in print. 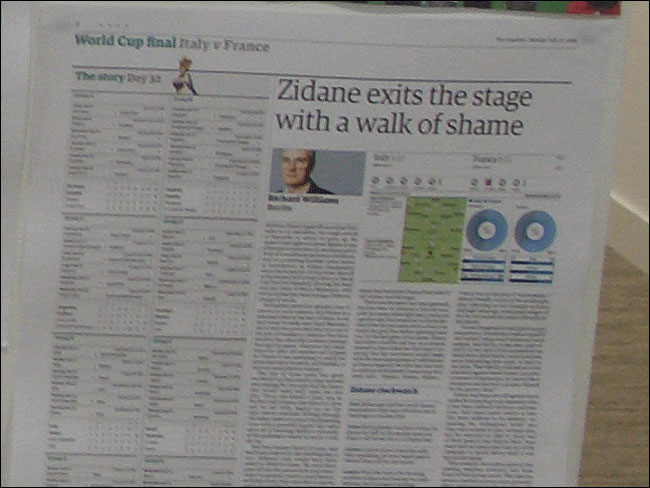 And how did we forget, in the middle of all the furore this year about Paul the Psychic Octopus, that in 2006 The Guardian had Der Kaiser, the betting fish?

"Der Kaiser had the tournament of his short life to teach mankind a thing or two about the world of gambling. Starting with a kitty of £250, he made a series of inspired punts to end up with £368.83 to spend on fish flakes and one of those little treasure chests that go in aquariums. His greatest World Cup moment came when he predicted Italy and Germany would be 0-0 after 90 minutes and won himself £55." 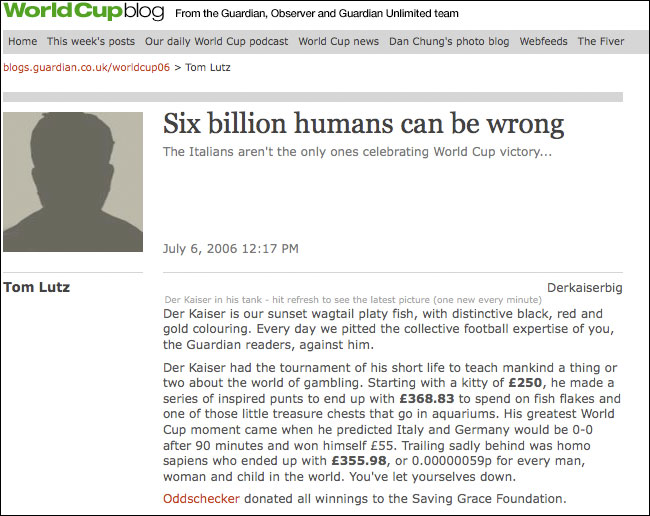 The Guardian has digital versions of their coverage of Euro2004, the 2002 World Cup and Euro2000 preserved online. 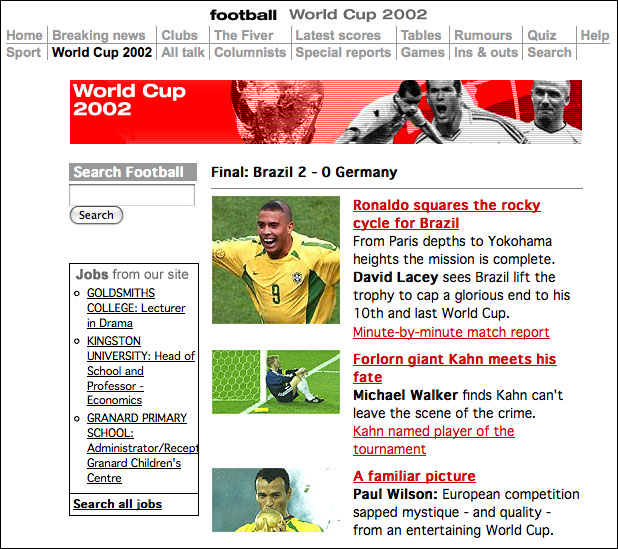 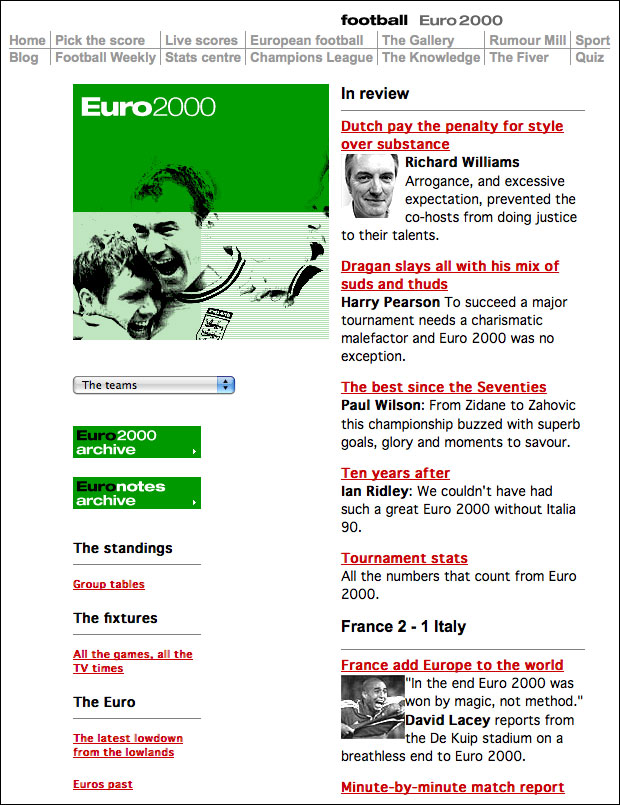 These only give the illusion of being 'preserved' though. If you click on one of the match reports from Euro2000, for example the semi-final between hosts The Netherlands and Italy, you'll find that whilst the front page retains a look and feel from 2000, the individual articles and match reports have been migrated into the current templates. 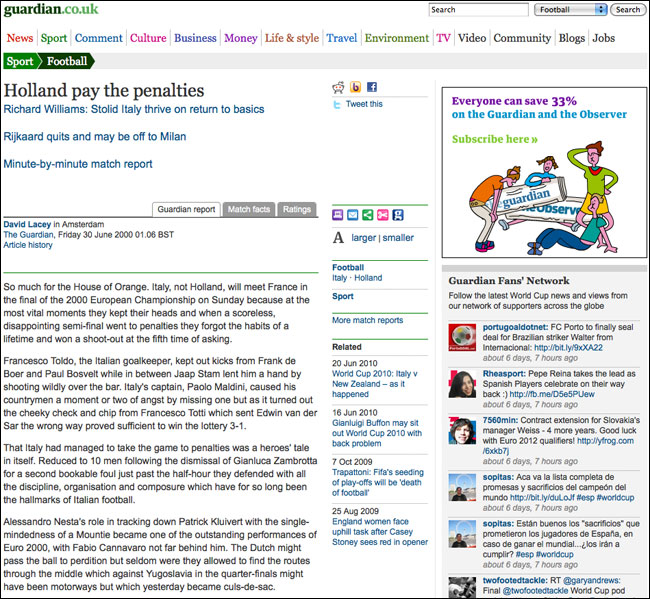 Still, The Guardian has done better than FIFA at preserving World Cup web content. All traces of the websites that Yahoo! built for them have gone, and although it clung on until the mid-2000s, you can no longer view the USA '94 website. 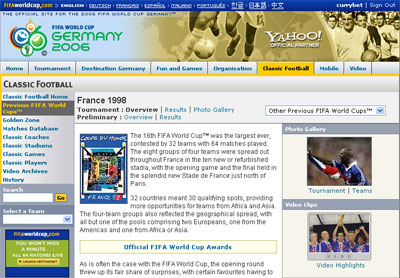 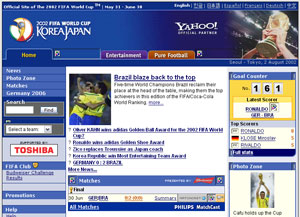 Since you are waxing historical for however short a time...the paper you draw paycheques from was based in northern England back in 1950 and was fittingly termed 'The Manchester Guardian'. This title only changed in 1959 to reflect a more national and less local body of content that characterized an ambitiously centre-left newspaper. It is referenced prominently in decent and memorable plays like 'Hobson's Choice' and others that date to the early 20th century.

You seem to display a nascent interest in the history of your rag Martin, so how about doing a competant and interesting retrospective article on the Guardian as a liberally inclined newspaper? You can ignore the journalistic decline of the past 30 years and simply focus on information-heavy prose together with credible and richly informative quotes - why not head to a big library and get a digicam shot of an edition of the Manchester Guardian from around ~1900 to emphasize the history of the paper?

Speaking only for myself I would love it as it would be a dignified departure from your current field which while relevant and engaging is somewhat narrow. As a novelty piece it might be valuable providing it is written in a lucid tone and contains a good image plus a touch of humour to keep readers engaged. Do you think you could pull it off?